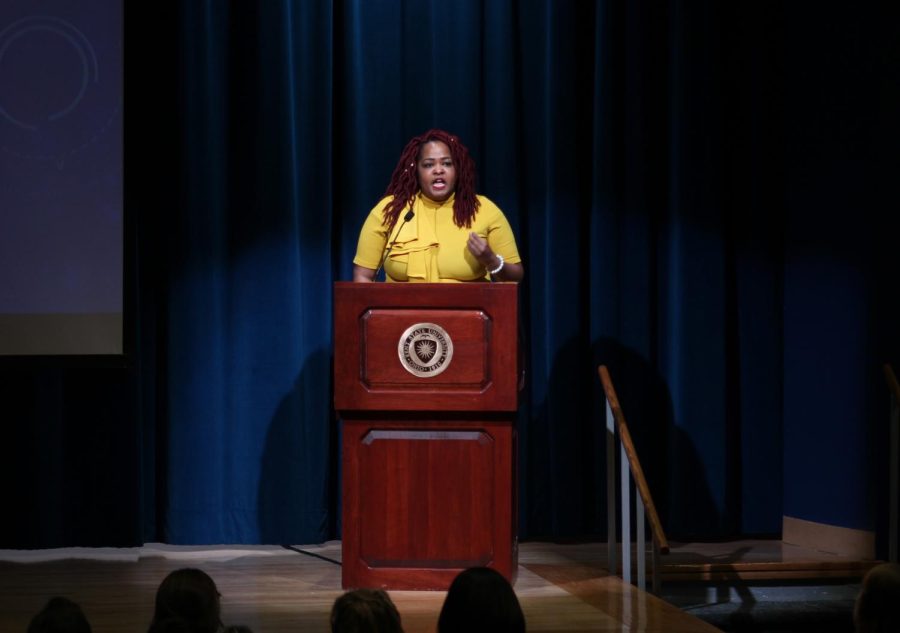 Representative Stephanie Howse, current representative of the 11th district of the Ohio House of Representatives sets the tone for Black Moms Matter panel on Wednesday, Mar. 4, 2020.

“The disparity is a product of systemic racism,” said Robinson.

In direct response, Howse began working with legislators to create laws that will keep black women safe, but she said it has not been easy to get the votes she needs.

“It’s hard to convince people who don’t understand, or really don’t care about you,” she said.

Over the last year, Howse worked to create new legislature and societal changes that bring black maternal health to the forefront.

“I continually try to use my voice to change a system that has ultimately led to the death of black mothers and black babies,” Howse said.

During the panel, three other women joined Howse for a conversation about what can be done to improve black maternal health:

The main topic of discussion was the importance of paying attention to your mental health. For black women, stress comes engrained with society, Neal-Barnett said.

“The biggest stressor affecting black women is racism, and it’s a chronic one,” she said.

While it is important to pay attention to mental health and treat yourself right, Smith said not all pregnant black women have the time or resources. Smith, who is a pregnant, single mom, takes four busses to get to her doctor almost every day.

Smith told a personal story of deciding between a pay raise and the possibility of losing her benefits and said she considers herself lucky to have the choice. Many black women do not have comfortable access to a doctor.

“Because of this, we’re trying to tell physicians that black women feel that they don’t have the time to listen because [the doctors] aren’t taking into account what it took to get here,” she said.

To cope, Neal-Barnett said that the most important thing to a mentally healthy pregnancy is learning to recognize when you are stressed and anxious.

“Black women in this country have suffered trauma,” said Neal-Barnett. “From there, you have to understand how to deal with the trauma.”

Neal-Barnett said she feels there are not enough therapists who are black or know how to treat black women’s generational trauma. So, it falls in the hands of the black community to come together and overcome trauma.

After losing twins during premature childbirth, Pierce believes one of the most important steps to overcoming the loss comes with having a safe place to talk about it and normalize it.

Pierce said she talks about her losses openly because it helps bring others who are not as open together. “It’s not only Serena Williams, not only celebrities,” she said, “It’s somebody they see in their gym every day.”

Howse said she works every day to push legislation that keeps black mothers and babies safe. “We put forward pieces of legislation that we know will help change the environment for black families,” she said.

Those pieces of legislation include paid family and medical leave, trauma-informed care to help health providers understand trauma and the Pregnancy Associated Mortality Review (PAMR), which looks into pregnancy-related deaths and researches ways to create a better environment for mothers.

Howse reminded attendees that in order for legislation to have an impact, people need to vote.

“We have to replace the people who aren’t ready to have the conversation,” she said. “Vote unapologetically.”