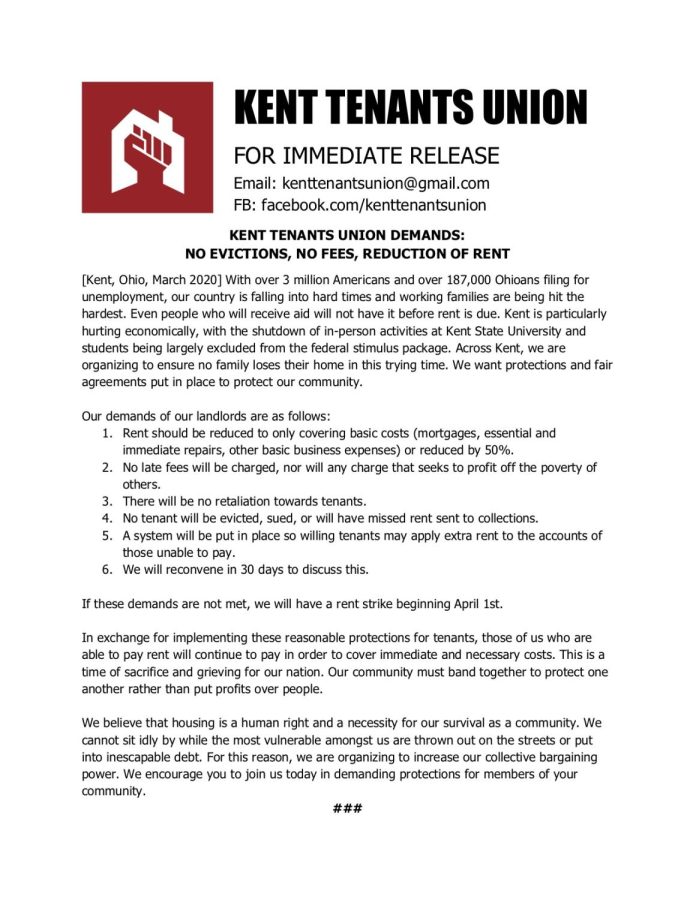 Press release sent to all of the landlords, stating their demands.

With the first of the month here, many people start to ask the question, “how am I going to afford rent?”

Because of businesses being closed and people sheltering in place, some people may be out of a job or have severely cut down hours, and the money they used to rely on to help pay their rent may no longer be available.

The Kent Tenants Union formed at the beginning of the statewide “stay-at-home” order on March 23 in hopes to gain enough people to make a change to the rent.

“We are a collective of tenants in Kent, Ohio, trying to increase our collective bargaining power in order to make sure that there are no evictions, make sure that none of us become homeless or go into an escapable debt,” said James, a member of the Kent Tenants Union who preferred to only use his first name.

James said forming this group is important because there is less bargaining power as an individual than being in a union and having over 100 people standing by your side.

As the union grew and the calendar days flew by, the next step was sending all of the apartment complexes their demands.

The union reached out to over 10 different landlords, including Kent Apartments, Century 21 and Jack Kohl, whether that was through hand delivering their demands, emailing or both.

KentApartments sent out an email to residents saying that “we are still collecting April rent at this time, but we aren’t charging late fees, evicting anyone through this crisis, or affecting credit scores.”

They explain that the rent is used for included utilities, but ask for tenants to pay as much rent as they can afford.

“It’s just asking for these landlords, these apartments, to help us out at a time when we really need it,” said Emilio Marriott, a junior studio art major and a member of Kent Tenants Union.

In a press release sent to all of the landlords, they set their demands, explaining that if there is no change by Apr. 1 there will be a rent strike.

1. Rent should be reduced to only covering basic costs (mortgages, essential and immediate repairs, other basic business expenses) or reduced by 50%.

2. No late fees will be charged, nor will any charge that seeks to profit off the poverty of others.

3. There will be no retaliation towards tenants.

4. No tenant will be evicted, sued, or will have missed rent sent to collections.

5. A system will be put in place so willing tenants may apply extra rent to the accounts of those unable to pay.

6. We will reconvene in 30 days to discuss this.

While the goal of the union is to ensure the safety and security of all the tenants, the importance of keeping the landlords’ sources of income is also considered.

“The idea is lowering your rent to a point where the people who run these places can still run them to satisfaction, and still support themselves,” Marriott said.

While making these demands, the union continues to push the idea of paying rent if you are still able to. If there is no change in the landlords’ decisions by Apr. 1, that is when those who have the ability to pay will start to strike alongside those who are not able to.

“We are asking people who can pay to pay if they can,” James said. “We think the landlords are more likely to negotiate with us if we’re saying, ‘we’re going to give you what we can.’ But they need to understand that there are some people who are not going to be able to put anything towards paying rent.”

While the Kent Tenant Union waits to hear the landlords’ answers, they are prepared to strike and take any peaceful measure necessary to protect those who may not be able to pay their rent.

“I think the next step is just to plant our feet in the ground, and just [be] insistent,” Marriott said. “…In doing that we’re only going to gain more support.”

Sara Crawford is an assigning editor. Contact her at [email protected]