Jane Fonda to speak during May 4 commemoration 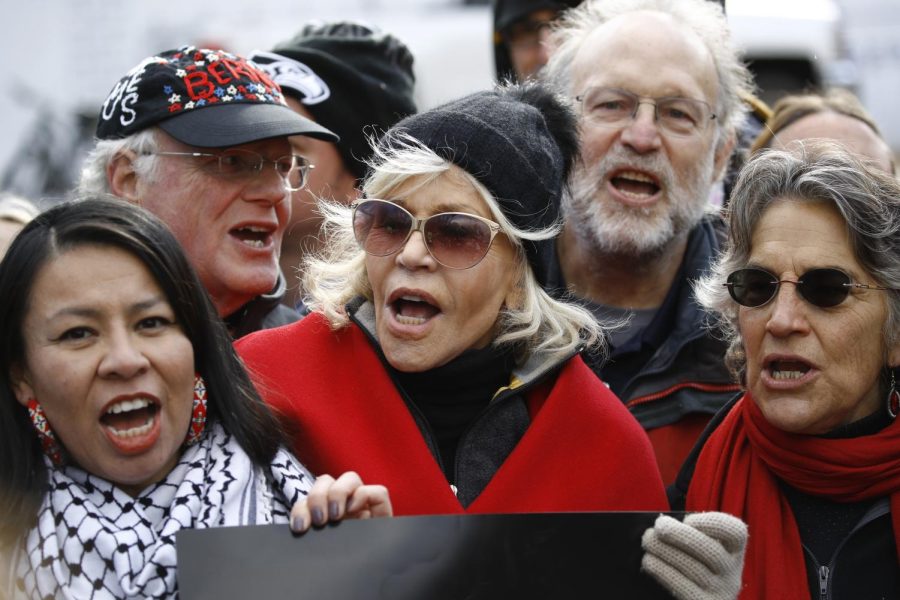 Actress and activist Jane Fonda (center) and others protest against climate policies and advocate for the impeachment of President Donald Trump outside the White House, Nov. 8, 2019, in Washington. Standing behind Fonda are Ben Cohen, left, and Jerry Greenfield, co-founders of Ben and Jerry's ice cream. (AP Photo/Patrick Semansky)

Actress and political activist Jane Fonda will speak on Kent State’s campus May 3 in the M.A.C. Center during the 50th commemoration of May 4.

On May 4, 1970, members of the Ohio National Guard opened fire during a protest on Kent State’s campus, killing four and wounding nine.

Fonda, 82, will speak as a part of the presidential speaker series; other speakers for the commemoration include constitutional law expert Laurence Tribe and historian Eric Foner.

Fonda previously spoke at Kent State during anti-war campaigns in 1972 and 1974.

“More than students died here,” she said during her 1974 visit to Kent State, according to The Kent Stater archives. “The shootings happened in the context of repression and terror that was aimed at crushing the anti-war movement.”

Fonda gained national attention for her protests of the Vietnam War during the 1960s and 70s. In 1972, she visited Vietnam and was photographed sitting on a North Vietnamese anti-aircraft gun.

Fonda has apologized for the photo several times. She wrote on her website in 2011, “I have apologized numerous times for any pain I may have caused servicemen and their families because of this photograph. It was never my intention to cause harm.”

Since October 2019, Fonda has been arrested multiple times during climate change demonstrations on Capitol Hill.

The May 4 Commemoration plans were announced by President Todd Diacon at the faculty senate meeting Monday.

“It is our great responsibility and honor to welcome the nation and world to our campus,” President Todd Diacon said in an email following the announcement. “Together we will remember Allison Krause, Jeffrey Miller, Sandra Scheuer and William Schroeder and honor Kent State and community members who have kept their memories alive for 50 years. We will listen to, and learn from, noted speakers, experts and performers, all while we absorb the lessons of the importance of free speech, the need for civil dialogue and the dangers of polarization.”

The weekend plans for the commemoration are taking place May 1-4, each day emphasizing a different focus of the May 4 story.

Friday, May 1 will focus on the Vietnam anti-war Movement; Saturday, May 2 will focus on the impact of student activism; Sunday, May 3 focuses on remembering the 50-year May 4 legacy and Monday, May 4 hosts “A Commemoration to Honor and Remember.”

Kent State will also hold a special benefit concert with proceeds supporting the newly created May 4 Legacy Scholarships honoring the four students killed on May 4, 1970. More details and the lineup will be announced at a later date according to the email.

Paige Bennett is a general assignment editor. Contact her at [email protected]