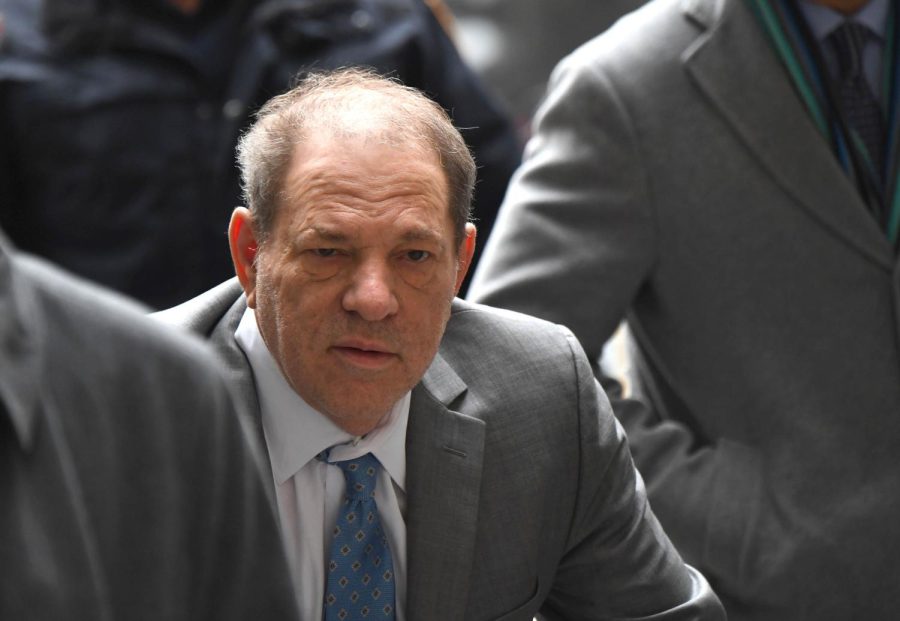 Harvey Weinstein arrives at the Manhattan Criminal Court, on February 18, 2020 in New York City. - Jurors will begin deliberating the fate of ex-Hollywood titan Harvey Weinstein on Tuesday in his high-profile sex crimes trial that marked a watershed moment in the #MeToo movement. The disgraced movie mogul, 67, faces life in prison if the jury of seven men and five women convict him of predatory sexual assault charges in New York.More than 80 women have accused Weinstein of sexual misconduct since allegations against him ignited the #MeToo global reckoning against men abusing positions of power in October 2017. (Photo by Johannes EISELE / AFP) (Photo by JOHANNES EISELE/AFP via Getty Images)

The disgraced movie mogul faces a minimum of five years and a maximum of more than two decades in prison. He was handcuffed and taken into custody after the New York jury’s verdict.

“Rape is rape … whether it’s committed by an indigent person or a man of immense power, prestige, and privilege.”

Weinstein’s lawyers said they will appeal the jury’s finding.

“While he was not convicted on the most serious charges, we are disappointed in the verdict and will be filing an appeal,” said a statement on behalf of attorneys Donna Rotunno and Damon Cheronis. “There are issues in this trial that were extremely troubling, and they prejudiced Mr. Weinstein’s ability to have his case fairly judged. These will be addressed to a higher court.

The attorneys also said they are working on assuring that Weinstein is brought to an infirmary and placed in protective custody at Rikers Island — New York City’s main jail complex — “so that he can get the best medical supervision and care possible.”

In doing so, jurors indicated that they did not find beyond a reasonable doubt that Weinstein had also raped actress Annabella Sciorra, another alleged victim whose testimony prosecutors used in an attempt to establish Weinstein’s predatory behavior.

Jurors deliberated for more than 26 hours over five days before reaching a verdict Monday morning. A motion for a mistrial by the defense earlier Monday was denied.

When the verdict was read, jurors did not appear to look at Weinstein and may have been avoiding making eye contact with anyone.

It’s not clear exactly how many years in prison Weinstein faces. Sentencing is scheduled for March 11.

For the charge of criminal sex act in the first degree, he faces a minimum of five years and a maximum of 25 years in prison.

For the charge of rape in the third degree, he essentially faces no minimum prison time and a maximum of four years.

Actress Ashley Judd, who accused Weinstein of sexual harassment, lauded the women at the center of the New York case.

“For the women who testified in this case, and walked through traumatic hell, you did a public service to girls and women everywhere, thank you,” Judd tweeted.

But Weinstein’s criminal cases aren’t over. He also faces charges of sexual assault and rape in separate incidents in Los Angeles.

Weinstein has denied allegations of non-consensual sexual activity related to the other women.

How the case unfolded

Four other women, including Sciorra, also testified that Weinstein sexually attacked them as prosecutors sought to show that he used his power in the movie industry to prey on young, inexperienced women.

Sciorra’s testimony that he raped her in the winter of 1993-1994 is outside of the statute of limitations but could have been used to support the predatory sexual assault charges, which requires serious sex crimes against at least two victims.

Weinstein’s defense attorneys argued that the sexual encounters were consensual. As evidence, they pointed out that both Haley and Mann had sex with Weinstein after the alleged attacks, and they continued to have friendly contact with him for years afterward.

The verdict ‘marks a new era of justice’

The women’s testimonies highlighted questions about consent and power dynamics — questions that rarely, if ever, have been tested in a courtroom.

A wave of accusations against men abusing their power ensued in what are now called the #MeToo and #TimesUp movements.

Tina Tchen, president and CEO of the Time’s Up Foundation, said the verdict marks an important turning point.

“This trial — and the jury’s decision today — marks a new era of justice, not just for the Silence Breakers, who spoke out at great personal risk, but for all survivors of harassment, abuse, and assault at work,” Tchen said in a statement.

Once an acclaimed producer of movies such as “Shakespeare in Love” and “Pulp Fiction,” Weinstein was accused by multiple women of a wide range of sexual misconduct in stories published in October 2017 in The New York Times and The New Yorker.

Debra Katz, an attorney for Dawn Dunning, who testified against Weinstein, said Monday afternoon that Weinstein belongs in prison.

“Harvey Weinstein has hurt dozens and dozens of people by his sexual predatory rapist violent behavior, and today there can be no other discussion other than Harvey Weinstein is exactly where he should be,” Katz said.

Douglas Wigdor, attorney for Tarale Wulff, who also testified against Weinstein at the trial, said that while Monday’s verdict was significant, Weinstein’s behavior has done damage to his client and others.

“While he’s been convicted, we can’t undo the harm that he’s caused to so many victims. Today will be some load of relief for all of the assault survivors,” he said.