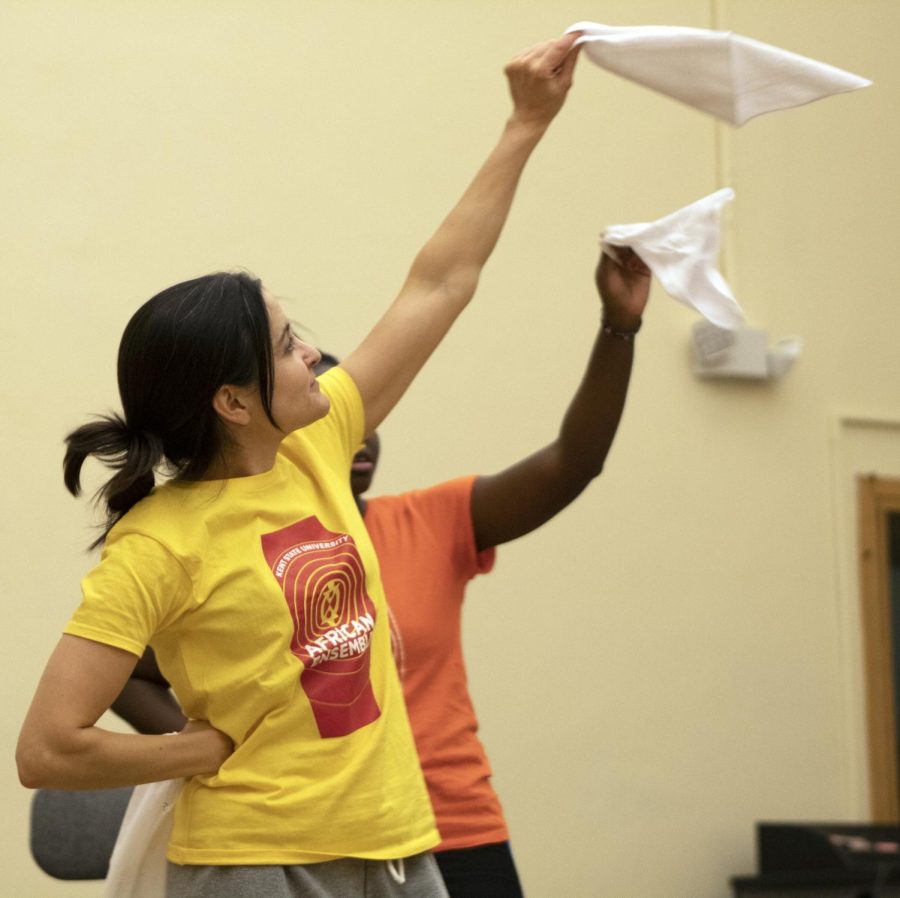 Janine Tiffe, doctor of ethnomusicology and assistant professor, rehearses a dance with the African Ensemble. The dancers waved small towels around to music. Nov. 13, 2019

Kent State’s African Ensemble allowed one student to discover a side of her identity  she never previously explored.

Faith Forinash, a senior music education major, joined the African Ensemble in the spring of 2019. She discovered the ensemble accidentally when she walked into one of the rehearsals after hearing the sounds of dancing and drums.

Forinash described the ensemble as a way for her to explore her racial identity more closely than she ever has before.

“The fact that I was going to be the majority,” Forinash said was part of the reason she was so drawn to the group. “It’s honestly amazing.”

Prior to joining the ensemble, Forinash found it difficult to explore her cultural roots. Being the only person of color in her family, she has used the things she has learned to educate her family about African cultures.

“I’m teaching them along the way and they’re being very supportive of it too,” she said.

Forinash described herself as being the perfect example as to why world ensembles such as this one should exist. Since joining the group, Forinash has changed the way she talks about her racial identity.

“I actually have changed the way I immediately identify my race because of this,” she said. “Usually I would say, ‘I’m mixed. I’m white. I’m black. I do not say that anymore. I say I am a biracial African American.’”

Forinash is primarily a dancer for the group but Janine Tiffe, director for the ensemble, requires students to experience and learn the dancing and drumming.

“I think it’s really important for everyone to at least have a taste of everything,” she said. “You’re going to be a better drummer if you understand the dancing and vice versa.”

Tiffe was first drawn to African music when she heard the complex drum rhythms when she was a freshman in college. She was attracted to the complexity of the music and wanted a challenge. She is the director of the African Ensemble and the Steel Band.

“The music and the dance go together so closely,” Tiffe said. “You have to be able to hear very well to understand where the dancing goes.”

The African Ensemble was created in the 1980s by professor Halim El-Dabh. Any student in any major can take the class to be in the ensemble. The group performs “traditional and modern drumming, dancing and singing from various cultural groups in Africa and its diaspora,” according to the group’s webpage.

Apart from the end of semester concert, the group performs for the community when it can. For Black History Month, the group is performing at the Kent Free Library and for students at Davey Elementary School.

Lindsey Sellman is a reporter. Contact her at [email protected]