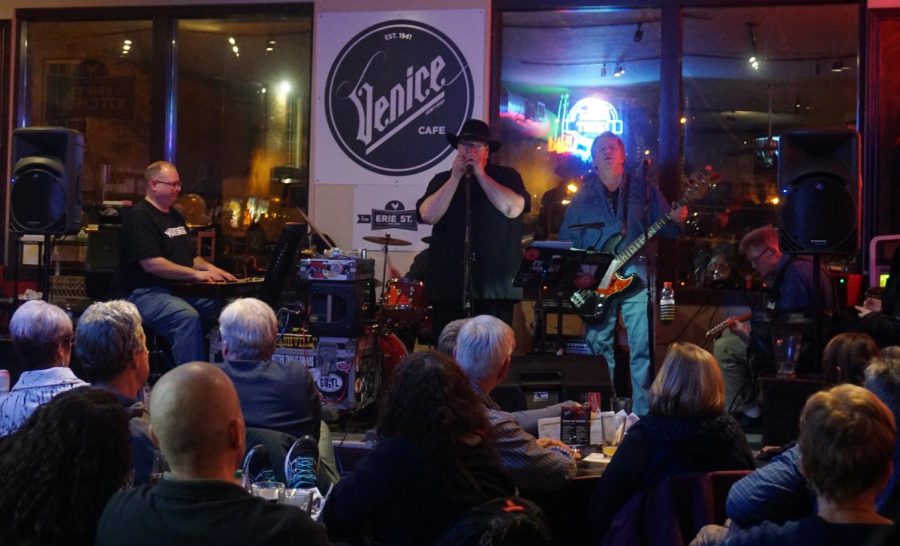 Over 20 bands descended on downtown to flood local venues with the sound of the 60s. The Jillettes were a part of the British invasion of Kent. The Jillettes have been a band for about 12 years and have played at Beatlefest every year. This year the band played upstairs at Buffalo Wild Wings and the crowd was full of their loyal fans.

“We come for all the bands, but we come see them [The Jillettes] first,” Mary Derak said “They are one of the best.”

Mary sat with her husband Chuck as they waited for their favorite tribute band to start and told stories of when they saw the Beatles live in Cleveland.

“It’s a pretty big ego boost,” said Larry Kadlub of the Jillettes when asked how he felt about the growing crowd around the set.

Eighteen downtown venues opened their doors to these musicians. Bricco hosted the veteran performers Tucker & Davis. Tucker Smanto of the band was raised listening to the Beatles. He loves coming out to Kent and playing his favorite Beatles songs, which happen to be all of them.

“We have played together since 75 but went our own ways until 2012,” said Smanto, who plays guitar in the band. He has been retired for ten years after being a mailman in Akron.

Dominick’s Pub was at capacity for the Abbey Road performance. Patrons were turned away at the door, with one man exclaiming that he only comes to the festival for this band.

Abbey Road is one of the bigger bands that plays in the festival. They have been together for 38 years and is rated in the top five of Beatle tribute bands internationally. While they aren’t the original Fab Four, they do use the same guitars, amplifiers and drums as the Beatles.

“We have played for crowds as large as 33,000 and in the crowd was Cynthia Lennon,” said John Gilbert. Cynthia Lennon is the first wife of John Lennon, guitarist of the Beatles.

John Gilbert, head of the band, prides them for their four costume changes and the two European tours along with some Japan shows. Abbey Road is one of a handful of bands that have played at the festival yearly.

Revolution Pie invaded the Zephyr Pub this year, but have played previously at Ray’s Place and the Kent State Hotel and Conference Center. The band has been re-creating the music of The Beatles since 2002.

Sandy and Sam Cover sat and enjoyed coffee and muffins at Last Exit Books and Café while listening to Ryan Gavalier at the British Invasion Open Mic. Sandy and Sam both agree their favorite Beatles song is Yesterday.

The Beatlefest made crowds of all ages “Come Together” and “Twist and Shout” for local musicians and Downtown Kent businesses.

Emily Williams is a Regionals/Trumbull reporter. Contact her at [email protected]