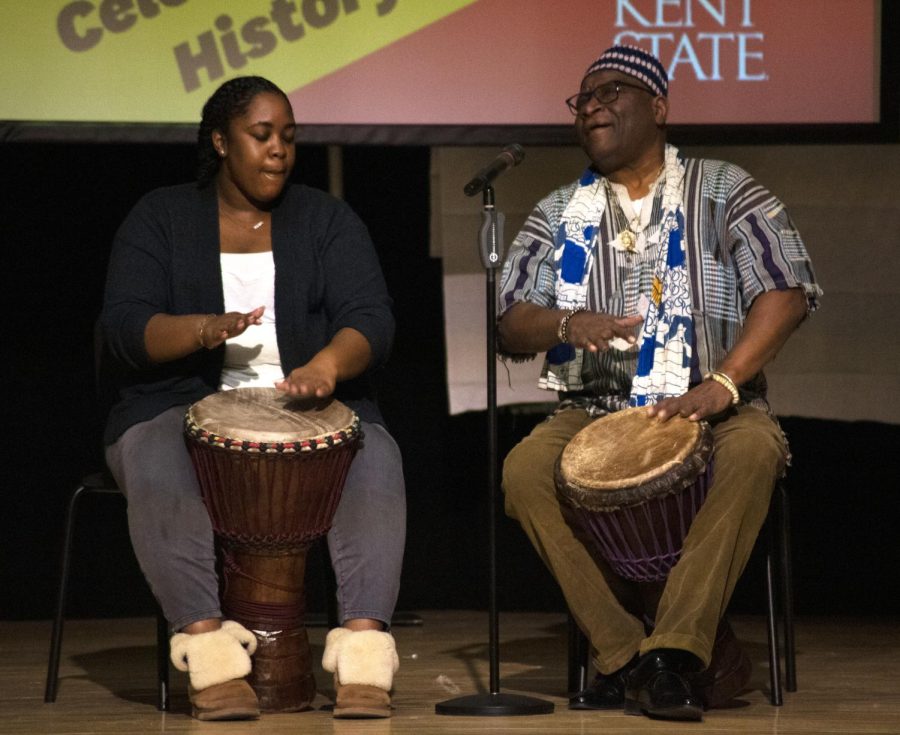 The 50th anniversary celebration of Black History Month at Kent State honored the four men known for starting the celebration, and those who continue their legacy.

Milton famously told the group, “If we can’t get it done in a week, let’s do the whole damn month.”

Crosby promised to have events for the whole month, and Milton said that in return, the celebration of Black History Month would be put on the university calendar.

All four founders have since died, but each received an award to honor their legacy. The Unsung Hero Award, which gives recognition to a program committed to excellence, was given to Dr. Amoaba Gooden and the Department of Pan-African Studies.

At the 50th anniversary celebration Saturday, alumni who participated in the Black Walkout of 1968 and celebrated the first Black History Month heard speeches from:

Dr. Amoaba Gooden, chair of the Department of Pan-African studies

The event began with David Coleman, a master drummer in the Department of Pan-African Studies, who performed a traditional African drum call. A sense of unity washed through the Cartwright Hall auditorium as the audience clapped along with the drum call.

After the drum call, President Diacon took the stage  to thank BUS, the Black Alumni Chapter and the Department of Pan-African Studies for allowing him to speak at the anniversary. Diacon said he is ready for the difficult conversation that comes with bringing equality to the campus.

“These difficult conversations are a part of the process of finding a shared understanding of what acts as a barrier to equity,” he said. “I look forward to celebrating the founding of Black History Month in this special anniversary year.”

Next, Ferguson discussed the pride he has in the organization. “We are never too stagnant, or too compliant,” he said.

In his speech, Ferguson said he had been asked many times what it means to be a black student at Kent State University.

“To sum it up, to be black at Kent State is to be unapologetically black wherever you go,” he said. “My voice has the power to change an entire institution.”

Ferguson said BUS will continue to support African-American citizens. He brought up the list of demands given to President Diacon last week regarding ending the school’s contract with Aramark and giving May 4th back to the students.

“The president responded with a meeting within the next week to discuss how to move forward with these demands,” Ferguson said.

After the performance, Gooden introduced Moore as the afternoon’s first keynote speaker and someone who taught her how “black students took risks to push Kent State toward becoming an equitable institution.”

During his speech, Moore said he remembered the four men who organized the first Black History Month celebration.

“If it wasn’t for what these men did, we wouldn’t be talking about it now,” Moore said.

Ashley served as the second keynote speaker. Ashley received a standing ovation as he took the stage for his speech that compared movements, such as the Civil Rights Movement, to the five cycles of a washing machine: washing, agitating, resting, rinse and spin.

He elaborated on the metaphor and how it relates to affecting change in society.

“The washing period occurs over an extended period of time because you have to get the dirt out of the fabric,” he said.

While fabric can mean clothing, Ashley said it can also mean the fabric of society.

In the 1970s, the washing cycle included protests like sit-ins and the Black Student Walkout, he said.

The next cycle is agitation, which Ashley defined as “effective change by shaking things up.”

In the early 1970s, every black cheerleader who auditioned for the team was cut. In Ashley’s words, BUS said “hell no,” and told university President Robert I. White that something had to be done. In return, White gave them a credit card and told the girls to get uniforms and form a squad.

“Agitating is just vibrations,” Ashley said, “and the more intense the vibration, the more powerful the outcome.”

After agitation comes the rest period. In a period of change, Ashley emphasized the importance of resting to take time to adjust to the change.

“Why would a machine need to rest?” he asked. “You don’t understand how intense agitation is.”

During the rinse cycle, the “dirty water” starts to drain out. Ashley said Kent State is in the rinse cycle because it continues to recognize the success of black students and alumni. He looked to President Diacon in the audience and told him that the rinse cycle is what separates Kent State from almost every other institution of higher education.

“You take what you did in the wash cycle, and get ready to clean up the last part of the dirt,” he said. “If you don’t know what cycle you’re in, failure is imminent.”

Ashley said Establishing the Department of Pan-African studies on campus is what brought Kent State into the rinse cycle.

Ashley said being on the spin cycle means any student could give a full history of how Black History Month was established on campus.

Ashley said putting Black History Month on the calendar was another event that pushed the university into the rinse cycle and continuing to honor it will bring us to the spin cycle.

“Putting it on the calendar mixes folklore from fact,” he said. “The first institution with a Black History Month.”

Ellington ended the night and presented a tapestry she designed that will hang in Oscar Ritchie Hall to recognize the four men who founded Black History Month.

It depicts all four men who established Black History Month in front of Oscar Ritchie Hall and the KUUMBA house, which was a place for African-American students on campus that stood where the Business Administration building is now. Underneath the four men, the famous quote: “Let’s do the whole damn month.”

Ellington became emotional as she reflected on designing the tapestry.

“It was an honor for me to be able to memorialize everything that the students and faculty have done,” she said. “I came after you guys. The legacy that you left means a lot, and the legacy I leave will mean a lot to the students who come after me.”