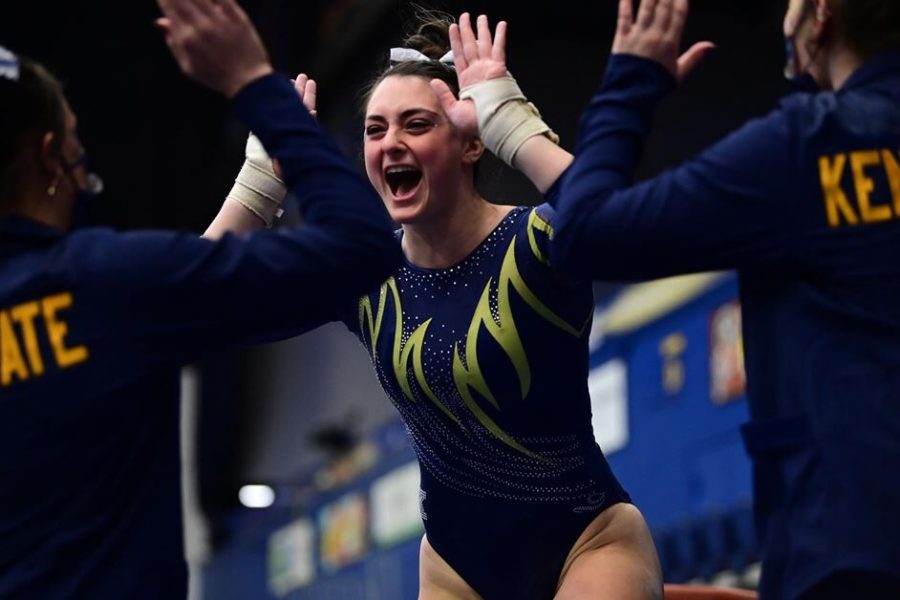 The Kent State gymnastics team only won one event Sunday, but it was enough to defeat preseason favorite Ball State by less than one-tenth of a point.

“We’re certainly happy to beat a good team in Ball State,” coach Brice Biggin said. “We struggled a bit on a couple events, but we’re really proud to see a fight in this group and a lot of tenacity. We see the attitude that they’re never ready to give up.”

The Flashes totaled 194.875 to 194.800 from the Cardinals. BSU was predicted to finish first in the Mid-American Conference this year in the coaches’ preseason poll.

Junior Rachel DeCavitch has won the all-around in both conference meets this season, scoring 39.000 Sunday.

“For us to be us, she has to perform well week in and week out,” Biggin said. “She’s really taken it upon her shoulders to make sure she just goes out there and stays consistent.”

The floor routine was one of the last events for both teams. The Flashes posted their best rotation of the day and outscored BSU by .700. The Cardinals had several falls and totaled 48.275, their lowest score of the competition.

Kent State finished the floor with 48.975, .050 better than in their meet last week. Junior Karlie Franz placed first in floor with 9.875.

In their meet on Jan. 16, the Flashes’ scored their highest on bars. Biggin said the team has been working on its strength in each event to ensure success.

“We know that we have really good ability in all four events,” Biggin said. “One weekend, we may be strongest on bars, one weekend it may be beam or vault. We feel like we don’t have a weak event this year.”

The Flashes started off the meet with a 48.625 score on bars. Sophomore Sarah Haxton scored 9.825 in the event, tying for first with Ball State’s junior Megan Teter. BSU scored 48.675.

Sophomore Kyndall Gilbert scored a career-high 9.900 on vault, the highest score in any event of the afternoon, and tied for first with Ball State’s sophomore Suki Pfister.

Earlier in the meet, Gilbert fell during her bars routine and reattempted her routine, scoring 8.900.

“We know what kind of power she has and what type of a vaulter she is,” Biggin said. “One of the big keys is understanding that if you make a mistake, you have to forget about it and move on, which she did.”

Gilbert said she was determined to score better on her next event after her fall.

“It was very uncharacteristic of me,” Gilbert said. “When we went to the vault, I had to push it out of my mind and do the best I possibly could, and I feel like I did that.”

Kent State finished with 48.750, but the Cardinals had their strongest performance of the meet on vault, scoring 49.025.

KSU had its weakest showing on the beam, its last event of the meet, totaling 48.525. Ball State won with a score of 48.825. Seniors Riley Danielson and Cami Klein, the last competitors of the event, had the highest scores for the Flashes with 9.775.

“The final score literally came down to the last two routines of the meet, and we talked to the girls about that being so important,” Biggin said. “Riley and Cami really did a phenomenal job.”

When preparing for upcoming strong competition, Gilbert says her team does not pay attention to previous results or other teams’ routines.

“Before every meet, no matter who the other team is, we keep our blinders on and only focus on our own team,” Gilbert said. “That’s what really keeps our energy up because we’re only focused on the people we’re competing with, not against.”