Not many people were walking around campus Thursday afternoon as frigid winds started to pick up and snow continued to fall.

In preparation for the impending storm, the university canceled classes for Thursday by Wednesday night, and by 4 p.m. Thursday, Winter Storm Landon dropped over five inches of snow. By Thursday evening, the university extended the campus closure through Friday, Feb. 4.

Even with campus closed, a few brave students made the trek from their dorms to eat at the student center or study at the library, covered in snowflakes and red-faced from the cold.

“Walking around campus has not been too bad,” freshman architecture major Elise Gerst said. “I’m wearing boots too, so that helps. They plowed and salted, and we were ready for it.”

Thursday marked the second time this semester that classes were canceled due to inclement weather. The university delayed the start of the semester from Jan. 18 to Jan. 19 due to Winter Storm Izzy, and students noticed the university managed Thursday’s snow and ice better than the weeks prior.

“I think they got to it quicker,” freshman journalism major Kaitlyn Mitchell said. “Last time there was a lot of ice. Now, the sidewalks seem to be a lot better. But it also seems like it didn’t snow as much, so I guess we’ll just have to wait and see.”

Other students took full advantage of their day off and avoided the frigid temperatures.

“I’m glad classes got canceled, and they’re online because I can stay in my dorm,” sophomore accounting major Drew DeGeorge said. “I walked back, and I slipped about eight times because I was walking before they plowed.”

Maya Wargelin, a junior psychology and English major, spent her snow day inside of her apartment just off campus. Wednesday night, with news of classes being canceled, she stayed up later than usual in preparation for the upcoming long weekend.

“There’s a video game that I really like that got remastered and re-released this week,” she said. “So yesterday, I got back, I finished all the stuff I needed to do, and I just kind of played through the night.”

The lack of students on campus did affect the university’s scheduled events.

Serena Sachar, who worked the poster sale which ran this week on the second floor of the Student Center, said the storm definitely slowed down business.

“We had like ten customers, and in the last few days we’ve had at least a couple hundred,” Sachar said. “I think we haven’t even made a hundred dollars today, so it’s definitely affected us.”

Sachar said the drive to campus was a bit difficult, but she emphasized that maintenance staff were working hard despite low staffing in harsh conditions.

“The roads were pretty bad, but honestly, we were able to make it safe so we’re happy about that,” Sarchar said. “But the lot that we parked in was not plowed at all. One of the custodial staff said that the people who help out with plowing are short staffed.”

Kent State’s commuter students face unique challenges when it comes to snow days. From going grocery shopping to walking to campus, it can be difficult to make it from one place to the next.

“Since classes were canceled yesterday, my ministry kind of hosted a breakfast at 11 a.m.,” he said. “I spent the majority of the morning with everyone.”

Horodysky trudged through the snow to the breakfast event from his apartment at Whitehall Terrace. Around 1:00 p.m., he ventured down the snowy Kent roads to pick up a money order.

He said the roads were “not so good” during his drive.

“I think they did try to plow, but there’s so much snow that they just covered up again,” he said. “So I feel like they need to be consistently out there and consistently shoveling, ‘cuz it’s all just gonna get covered again.”

While her apartment complex usually isn’t plowed very effectively, Wargelin said the campus itself did a good job.

“Generally, on campus, everything’s move-aroundable,” she said. “I felt good about it.” 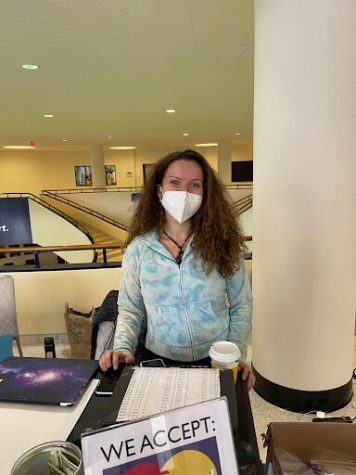 Like many other off-campus students local to Kent, Wargelin typically either walks to campus or takes a PARTA bus. She said while the campus itself has maintained proper winter upkeep, the off-campus area presents unique issues for commuters.

“It’s difficult to get to those [stores and restaurants off-campus] because they don’t really plow the sidewalks necessarily,” she said. “People have kind of made paths from walking in it [the snow] that you can follow.”

“I work at Chipotle off campus, and I’m honestly very scared for my commute,” junior history major Charissa Gilbert said. “I wanted to get my car from the stadium, but I was scared that I would get plowed in with my car here, so I’m just going to walk to work tomorrow.”

Winter Storm Landon will continue to bring snowfall to Kent and surrounding areas with another four inches expected by Friday night, according to the Weather Channel. Kent State’s campuses will return to regular operations by 10 a.m. Saturday, Feb. 5.

Hannah Keil is a reporter. Contact her at [email protected]

Morgan McGrath is a reporter. Contact her at [email protected]