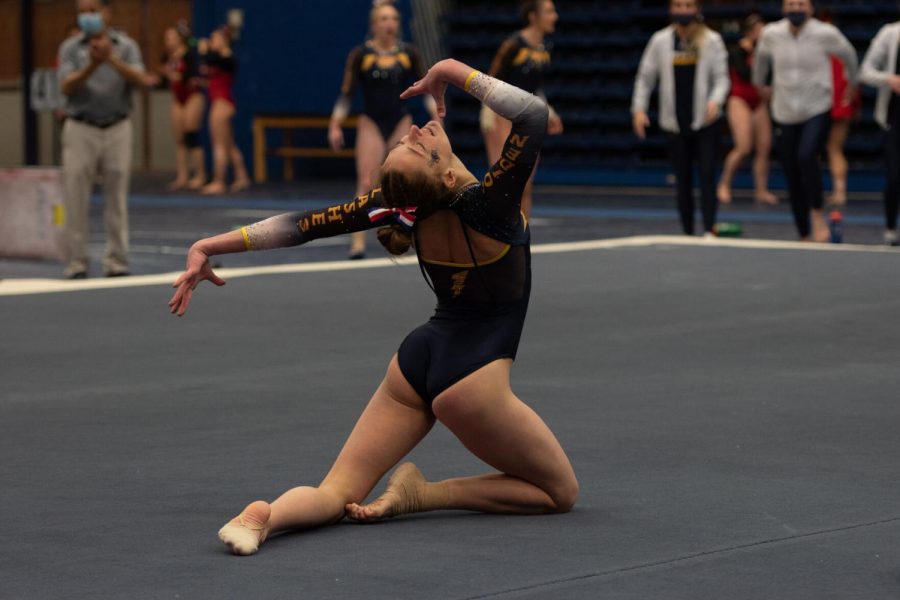 Cheyenne Pretola ends her floor routine with flourish during the gymnastics meet against Rutgers and Cornell University on Jan. 28, 2022.

“This was overall our worst performance of the year,” Biggin said. “Yeah, I’m happy with the win, but my picture is bigger. We have to perform better, otherwise we’re going to be in trouble for the rest of the season. ”

The Flashes finished with 195.050, their second lowest score of the season, and a 47.900 on beam, their lowest score in any event since last April.

KSU remains first in the Mid-American Conference at 4-0 and 10-2 on the season.

Guns, who also took first on vault and floor, said her team worked together to keep morale up when scores were down.

“We’ve been getting more consistent with having each other’s backs,” Guns said. “So even when we have an off event like we did Sunday, we can still pick it up.”

Biggin said the team needs to have more confidence on beam to improve.

“Beam is an event where you cannot second guess yourself,” Biggin said. “You have to go up there and continue working through the routine even if something feels a little off. They held back a little bit, and when you do that, usually good things do not happen.”

Despite struggling on beam, Kent State won all four events of the afternoon. This was the first time the Flashes won every event in a meet this season.

“Vault has come a long way this year,” Biggin said. “They’re performing at a much higher level. Our group from last year have all improved their vaults, which is huge.”

Senior Rachel DeCavitch tied with Guns for first, scoring a season-best 9.850. She also won the all-around with a season-high 39.300.

“I felt really confident in what I was doing,” DeCavitch said. “It takes a lot, but just having my teammates there to keep the energy up is really helpful.”

Floor has been the strongest scoring event for KSU in four out of its six meets so far this year.

“Floor is always a high-scoring event,” Biggin said. “If you don’t score high on the floor, you’re in trouble. The girls are doing a great job.”

Guns scored 9.900, the highest score in any event of the meet.

Out of the four regular-season competitions she performed in this year, Guns has placed first on floor three times. She attributes her consistent performances to staying calm and not focusing on other gymnasts’ scores.

“I just remember that it doesn’t matter what happens [in the routine] before me,” Gun said. “I’m my own performance, and I can turn an event around.”

Kent State finished with 48.900 bars, its second-lowest score in the event this season.

“I was a little disappointed with the scores from the judging,” Biggin said. “We hit really good routines but the scoring was a little tight at times.”

The Flashes compete at Central Michigan, which is 2-1 in the MAC and 2-3 overall, Sunday at 1 p.m.

DeCavitch said her team’s chemistry will give them an advantage while facing tough competition in the last four meets of the season.

“We’ve been really consistent with each other,” DeCavitch said. “We know what to say to each other when we need it. As long as we carry that on throughout the season, we’ll be good.”