LGBTQ+ hate crimes rise in the U.S., none reported at Kent State 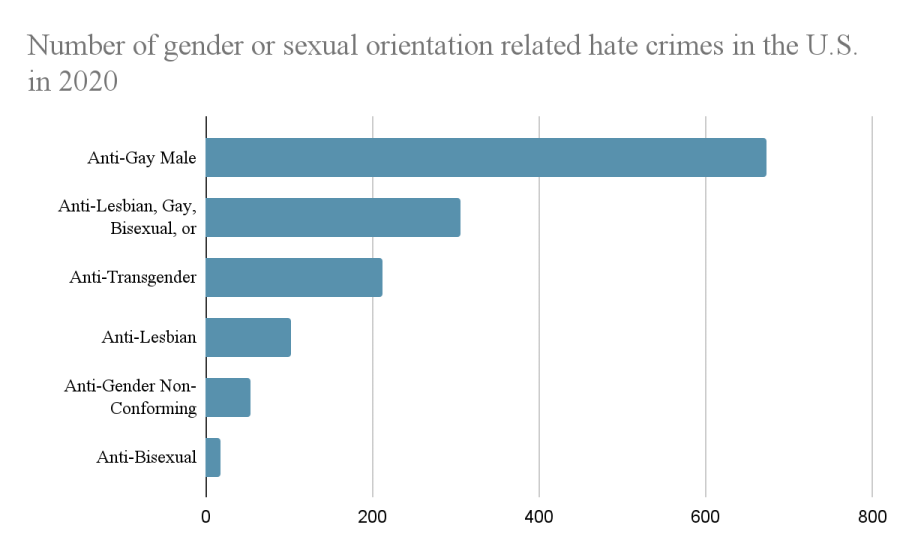 Lawmakers in seven states proposed laws to limit transgender and nonbinary youth rights within the first week of 2022.

As anti-LGBTQ+ legislation is making its way through state government, LGBTQ+ hate crimes have risen in number since the start of the pandemic in, 2020 Statista stated. Kent State has not recorded any hate crimes against the LGBTQ+ community in at least three years, but that does not mean the discrimination does not exist.

The way hate crimes are reported under the Ohio Revised Code is extremely specific, so unless an incident falls within the guidelines, it is not reported as such.

“In order for it to be risen to a hate crime there has to be certain stipulations that line up with the Ohio revised code, so there has to be a specific slur, specific derogatory term or a threat because of their sexuality,” said Tricia Knoles, a community resource officer for the Kent Police Department.

Despite the lack of recent reports, hate crimes on campus are still an issue, said Graham Callahan, a theatre design technology and production major with a minor in LGBTQ+ studies.

“Bullying and hate absolutely exist on campus,” Callahan said. “Just because things aren’t reported does not mean it’s safe. There are people who don’t report things because they’re too afraid to.”

“We do have a lot of outreach programs to different communities on our campus. The LGBTQ+ Center is one of them, so we’ve actually done at least two ‘Coffee with the Cops.’ COVID canceled a few of them, but we had one last semester,” Knoles said.

These events give students the opportunity to talk to officers about the experiences they have had with police departments.

Knoles has been a recurring member of the LGBTQ+ Center Action Team, which promotes an inclusive campus for the LGBTQ+ community. As an officer on campus, Knoles hopes to create an approachable environment for students.

Law enforcement wants students to feel safe around them, and Kent State works to create a safe and inclusive environment for the LGBTQ+ community, Knoles said.

“Kent is trying its best. I think that ‘best’ could be doing more, they could be doing a lot better, but I understand that an institution will only do so much radical change at a time,” Callahan said.

If students or members of the campus community do not feel safe reporting a crime, they can report anonymously to (330) 672-2212. Less serious concerns can be posted online to the Kent State University Threatline, an online anonymous messaging tool used to inform Kent police about non-urgent suspicious activity on campus. Students should call 911 or campus police directly in the case of an emergency.

Avery Savage is a reporter. Contact her at [email protected]