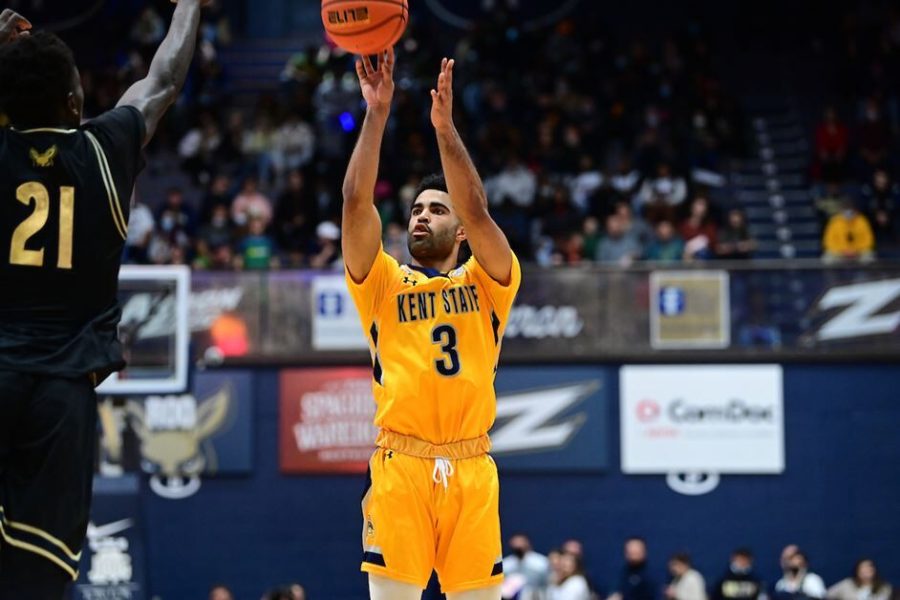 Defense made the difference for Kent State’s basketball team as it beat Northern Illinois 63-55 to extend their win streak to 11 games.

It is the longest win streak for the Flashes since the 2001-02 season.

Kent State utilized the paint and tough defense in the first half, taking a 32-25 lead at the half.

“We’ve been a good defensive team all season,” head coach Rob Senderoff said. “That has been one of the keys to the year we’re having.”

However the team was able to score 14 points in the paint, while forcing six turnovers with three blocks and four steals.

“We weren’t great offensively over the past couple games,” Senderoff said. “However, we were on point with steals, contesting shots, and did a great job in all of that.”

Kent State faced a tough defensive matchup from Northern Illinois, turning over the ball eight times, but it managed to shoot 44 percent (11-25) in the first half.

The Flashes attacked the basket, drawing fouls and shooting 72 percent (8-11) from the free-throw line.

The defense didn’t let up in the second half.

The Flashes’ defense was able to force 14 turnovers, allowing the team to score 14 points of the turnovers.

KSU struggled from behind the arc as well on the night, shooting only 16 percent (3-18) however shot well elsewhere, shooting 41 percent (20-48).

Kent State was able to draw a lot of fouls, where the team scored 20 points off free throws shooting 66 percent out of 30 attempts.

Redshirt senior forward Justyn Hamilton returned to the lineup after a two-game absence, scoring 11 points with six rebounds and a steal.

“[Hamilton] helped a great deal,” Senderoff said. “He had double-figure points, he is very impactful around the rim, and Northern Illinois is a really physical team, and we really needed him.”

Kent State plays its final regular season game against Buffalo on Friday at 6 p.m. at the M.A.C. Center for Senior Night.

“I hope whoever is reading this is planning on being there on Friday night,” Senderoff said. “We’ve had a special season so far, and we have a chance to play a great team on national television, and have a chance to have won 12 straight games heading into the conference tournament.”