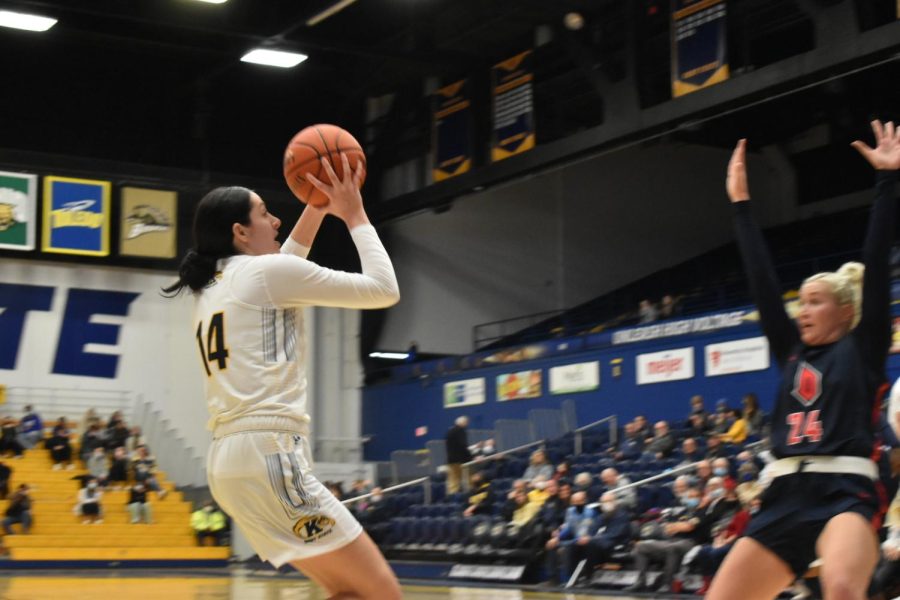 “I thought we did a great job,” coach Todd Starkey said on the Kent State Radio postgame show. “We did get down, we fought back and we just talked in the huddle. We’ve lost some of these close games early in conference play. The girls looked at me and said ‘We’re not doing that anymore.’ We’ve learned some things from the losses that we had. They got incredibly tough down the stretch.”

The win put the Flashes a half game behind Northern Illinois University (8-11, 5-6) who is currently in the eighth spot in the MAC. The top eight teams advance to Cleveland for the conference tournament next month.

Despite Kent State shooting 55.6 percent compared to Eastern Michigan’s 33.3 percent in the first quarter, the teams found themselves tied at 14 points each after one quarter of play. The Flashes turned the ball over eight times in the first 10 minutes of action.

The Flashes scored just 11 points and gave up 19 points in the second quarter. The team found themselves down 33-25 at the half.

In the third quarter, KSU chipped away at the Eagles’ eight point lead and after three quarters of action had trimmed the lead to 48-44.

KSU made eight of its 10 three point attempts in the second half and shot 10 of 19 (52.6 percent) from three-point range overall.

“Really good inside out play,” Starkey said. “I thought we got a lot of paint touch threes. They were rhythm threes. If we start shooting the ball like we did in non-conference play, and we can finally get into a rhythm of consistent play on the court against another opponent, other than just in practice, I think our shots are going to start coming back to us. When we do that I think we can compete with and beat anybody in the league.”

Overall from the field, the Flashes shot 49 percent on 25 of 51 attempts.

“We had a really good balance in scoring once again,” Starkey said. “Four are in double figures and Mariah [Modkins] had nine. When we do that, we’re really tough to beat.”

Modkins, a senior guard, found her shot from beyond the arc scoring nine points on 3 of 4 shooting from the three-point line.

“So great to see her [Modkins] make some shots,” Starkey said. “Obviously, she’s been in a little bit of a shooting slump and that’s not her. She’s an exceptional shooter. We’ve just been talking confidence into her and saying keep shooting good shots. Her teammates were excited when she knocked down those threes.”

Leading the way for the Eagles was redshirt senior guard Areanna Combs, who had 15 points and nine rebounds, redshirt sophomore forward Ce’Nara Skanes with 13 points and seven rebounds and junior guard Natalia Pineda with 12 points.

For the second straight game, the Flashes were outrebounded 45-30. The team was outrebounded 20-5 on the offensive end.

Kent State turned the ball over 15 times in the game, committing 10 turnovers in the first half and five in the second.

Kent State is now 2-0 in the month of February as the team continues its stretch of four games in seven days.

“We’re going to fight like crazy to protect that zero in February and try to keep that zero in the loss column as long as we can,” Starkey said. “I think our group is happy that we’re playing games again and able to get back into a conference rhythm where we’re playing games. Just gutsy performances by a lot of different players and we really needed that today.”

Kathryn Rajnicek is a reporter. Contact her at k[email protected]