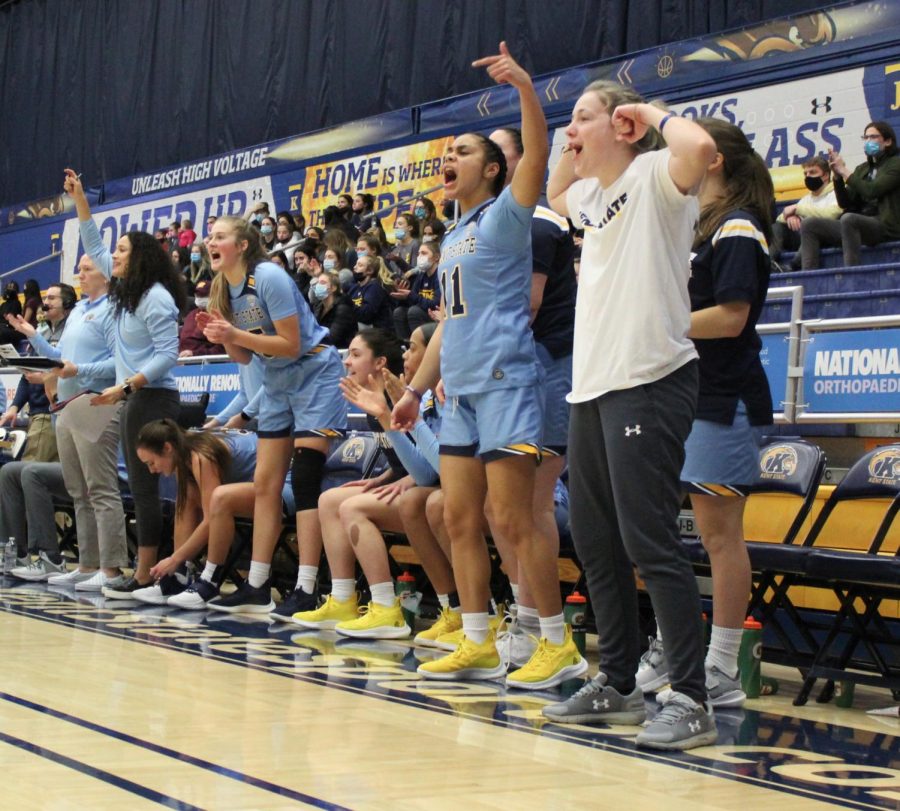 Team cheers on the sidelines as Kent scores again on Wed. Feb. 2, 2022 against Central Michigan University. The final score was 68-57 Kent.

“Anytime you’re coming back after a week off it’s kind of hard to tell what’s going to happen in a game,” coach Todd Starkey said. “Hopefully now in February we can get into a rhythm. I thought we executed some things well in the second half. We had some lapses and costly turnovers, and I wish we would have done a little bit better against their zone press.”

The Flashes are currently ninth in the MAC standings and the Chippewas dropped to last place in the conference with the loss.

The win was Starkey’s first against Central Michigan in his time at Kent State.

The Flashes pulled away in the second quarter, only allowing nine Chippewa points and forcing five turnovers in the quarter. Kent State took a 35-24 lead to the locker room at the half.

“In the second quarter, they were doing what they were supposed to do, they started communicating,” Starkey said. “We talk about that all the time. If you guys just play solid defense and communicate and stay connected, we’re a really good defensive team.”

KSU was up 50-37 and only committed two fouls through three quarters of play.

“There’s kind of some trade-offs with that,” Starkey said. “Sometimes, if you’re not fouling at all, you’re playing too passive. I think we could have played a little more physical and a little bit more aggressive and that type of thing. But, at the same time, I thought the key thing for us was to really play through the paint and really put pressure on them.”

The Flashes committed five untimely turnovers in the fourth quarter which allowed Central Michigan to outscore Kent 20-18 in the final 10 minutes.

Kent State was led by junior guard Katie Shumate, who had 21 points and went 7-11 shooting from the field with five rebounds.

“My teammates were cutting hard and screening well,” Shumate said. “I think Clare [Kelly] found me once under the rim. Just taking good shots. I think everyone on our team has been doing a better job of that lately and that’ll fix our percentages.”

Junior forward Nila Blackford had a double-double that consisted of 15 points and 11 rebounds. Senior forward Lindsey Thall had 11 points for the Flashes.

Central Michigan shot 41.2 percent overall from the field and 25 percent from the three-point line in the game.

“Overall, I thought we did a good job defensively, another team in conference we’ve held under 60 points,” Starkey said. “So if we can continue that trend and our offensive efficiency continues to get better, I think good things are ahead for us.”

The Chippewas were led by junior guard Molly Davis who had 20 points and four rebounds. However, Davis committed nine turnovers on the night.

“I thought we did a pretty good job of crowding her,” Starkey said. “We had a couple lapses there in the third quarter where she operated in too much space. She’s very talented.”

For the first time this season, the Flashes were outrebounded 31-30.

“We were outrebounded by one,” Starkey said. “We’ve either been even or won every one [rebounding battle], but at the same time I think we weren’t missing as many shots. So, maybe that’s the reason why we didn’t have more rebounds.”

The Flashes will be back in action against Eastern Michigan University (5-12, 2-8 MAC), which is in 11th place, Saturday at 2 p.m. in Ypsilanti.