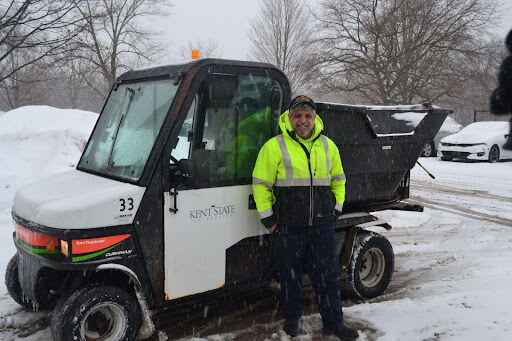 Fresh white snow dusted over newly plowed roads and parking lots Thursday morning as Kent State carts, pickup trucks and snow plows navigated the slippery conditions to get ahead of the snowfall.

Kent State groundskeeper Dav Roso began his work day at 6 a.m., after a 22-mile commute to the closed, snow-covered campus. Snow removal tends to be fairly easy once the snow stops, he said, but it presents issues when the team has to remove snow while it’s still falling.

“When it keeps snowing like it is, it’s tough to keep up with it,” Roso said. “I try to do my job but after you get it cleared away and stuff, 10 minutes later it’s covered up again. It’s just a[n] … ongoing process.”

Temperatures should reach a high of 28 degrees during the day, and 14 degrees at night, according to the National Weather Service, with five to 11 inches of snowfall by Friday morning.

It’s easy to fall behind with weather conditions like this, especially when factoring in groundskeeper and operator shortages due to sickness and vacation time, Roso said.

“It’s tough for the supervision to place people — it’s not their fault,” he said. “I mean, they can only do what they can do, and when you don’t have the people to put in different places it’s rough.”

Groundskeepers and operators are assigned to specific parts of campus for the summer and winter seasons so they know their area of focus at the start of the day, Roso said. It helps keep everyone on track and allows them to do the best they can with the weather conditions, and helps them know who’s nearby to help out when complaints or safety issues arise.

“I can’t even go anywhere because … the snow is wet, and I want to be able to get in at the end of the day,” he said. “I’m kind of worried about that.”

Thursday marked the second campus closure of the spring semester due to winter weather, and many professors moved their classes to virtual platforms. University officials closed campus Jan. 18, the first day of classes, due to heavy snowfall from Winter Storm Izzy.

Sophomore zoology major Trevor Steem was up early walking his dog Massimo and said staff members made a great effort to clear the walk ways compared to the Jan. 18 closure.

“The last time [Jan. 18] it took them to midday to start plowing and everything,” Steem said. “So I think they’re definitely on the ball now.”

“I worked for safety and security. So I walk a lot,” Mason said. “Other than a few slips here and there, nothing much.”

Roso expressed concerns for his own commute back home at the end of the day, and back to campus Friday morning.

“If we get buried, there’s no way I’m going to get out of the driveway,” he said. “I’ll try, but I’m not going to put myself in jeopardy or danger.”

Roso emphasized that university groundskeepers and operators are doing the best they can given the conditions, and will continue to do so as the day goes on.

“This is a light snow. I heard it’s supposed to get really heavy,” he said. “I just look out for students [and] everybody to be safe.”