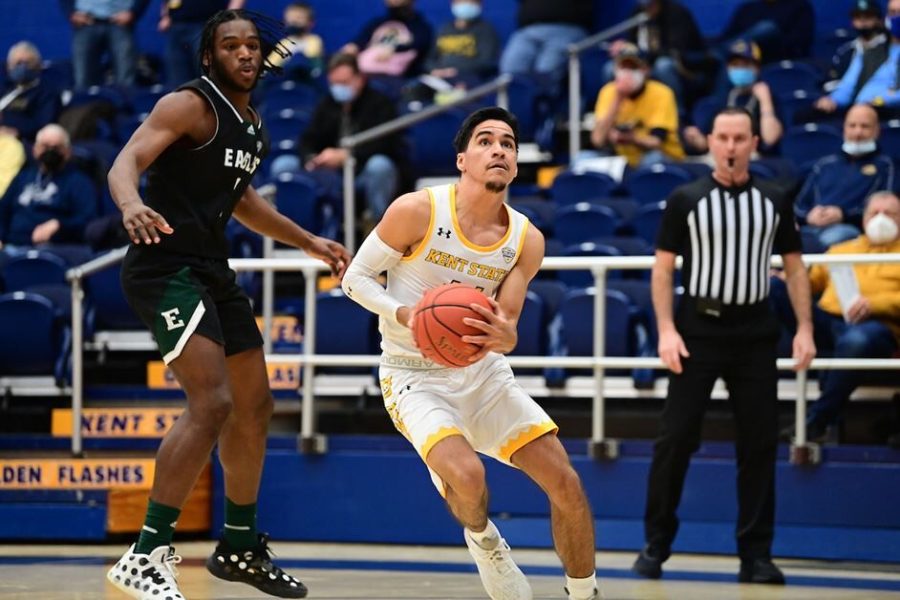 After struggling in the first half, the Kent State basketball team couldn’t seem to miss for the team’s fourth straight win.

Kent State defeated Eastern Michigan University 90-71, improving to 13-9 on the season and 8-4 in the Mid-American Conference.

“Great second half, obviously,” head coach Rob Senderoff said. “Overall, it was really good for us to come out in the second half and play the way we did.”

The Flashes struggled from behind the arc in the first half shooting 35 percent (5-14). The team struggled defensively as well, allowing Eastern Michigan to shoot 46 percent (6-13) from three-point range.

“In the first half we were scoring the ball, we just didn’t guard the way we needed to,” Senderoff said. “And give those guys credit, they made shots.”

KSU fell behind 39-35 at the end of the first half. However, a much different Kent State team came out of the locker room.

Kent State took over in the second half, with a big thanks to redshirt sophomore Giovanni Santiago. Santiago has been dealing with an achilles injury, but has appeared to get his rhythm back.

“I’m just grateful and happy to be back with my guys,” Santiago said. “They keep trusting me, and I’m trusting my shot, and I just feel better each day with my legs.”

The Flashes offense allowed the team to go on a 20-4 run towards the end of the half.

“We were just having a lot of fun,” Santiago said. “Especially when we were moving the ball and getting stops, and the bench was great, our energy in the second half was fantastic.”

Kent State took a 20 point lead at 3:07 which would put away Eastern Michigan.

Kent State has now won six out of their last seven, and it is on a four game-winning streak.

“Clearly we are playing better now than we were,” Senderoff said. “We were playing really good early in the year, but then we had a rough patch where we struggled.”

The Flashes will look to make it a five-game win streak when the team takes on Bowling Green on Tuesday at 7 p.m. at the M.A.C. Center.

“We have a big one at home on Tuesday,” Senderoff said. “Hopefully we can get students and people out here to see us.”