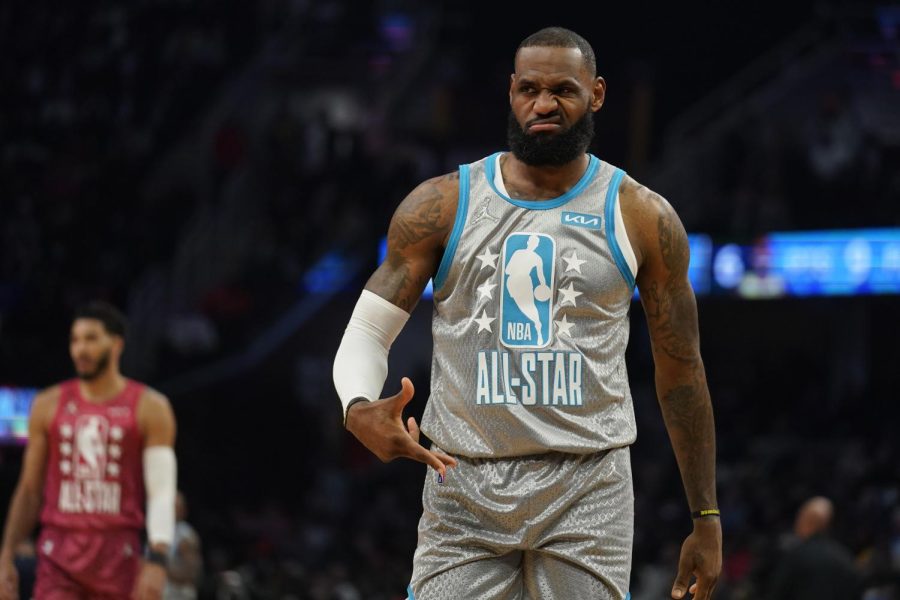 Los Angeles Lakers' LeBron James reacts to celebrities in the front row as he plays in the first half of the NBA All-Star basketball game, Sunday, Feb. 20, 2022, in Cleveland. (AP Photo/Charles Krupa)

LeBron James stepped back and sank a basket that not only won the 2022 NBA All-Star game for Team LeBron, but earned $450,000 for the Kent State I Promise Scholars Program.

The game, held in Cleveland, pitted the NBA’s best and most exciting players against each other. James led one team while the other was led by the Nets’ Kevin Durant.

Each team received $150,000 towards its charity before tip off. The charity then received an additional $100,000 for each quarter that the team representing it won. Team LeBron outscored Team Durant 47-45 in the first quarter, and Durant won the second 49-46.

The two teams tied in the third quarter to send $50,000 to each charity.

The fourth quarter was played without a clock, and the two teams had to reach a target score. Whoever hit that score first would win $150,000 for their charity, with Team LeBron being the victor. .

Kent State teamed up with James’ foundation in 2020 to give the children in the I Promise network, who were at the time juniors in high school, a full ride to college.

The first class of I Promise Scholars arrived at Kent State in the fall 2021 semester. They received free tuition for four years and one free year of rooming and meal plan.

James created the program after seeing the high number of students dropping out of school in the Akron area. The I Promise school, which teaches kids from the first to the eighth grade, was founded in 2018, and it helps disadvantaged children succeed in their studies.