US officials fear the worst is yet to come for Kyiv 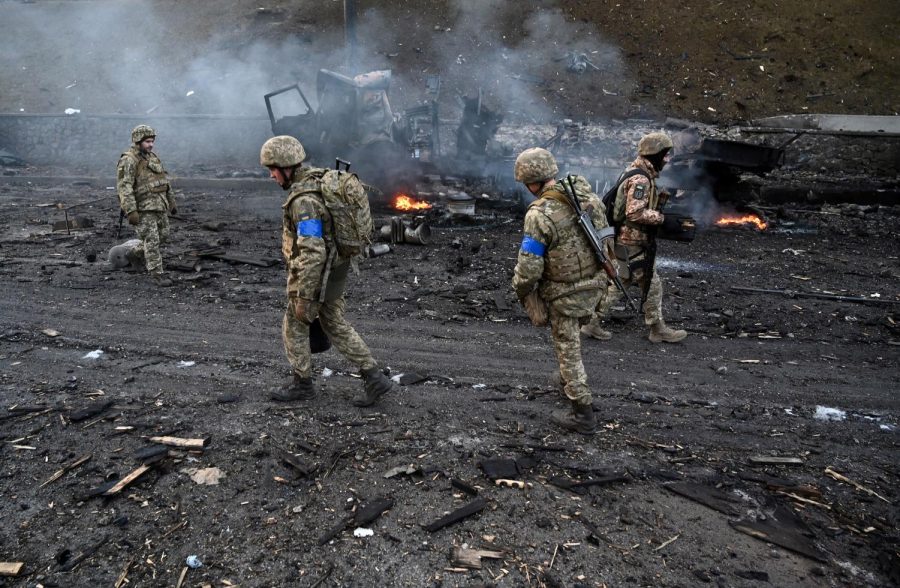 Ukrainian service members collect unexploded shells after a fighting with Russian raiding group in the Ukrainian capital of Kyiv in the morning of February 26, 2022, according to Ukrainian service personnel at the scene. (Photo by Sergei SUPINSKY / AFP) (Photo by SERGEI SUPINSKY/AFP via Getty Images)

(CNN) — Ukrainian forces have so far managed to stave off Russian ground forces massed less than 20 miles north of the embattled capital Kyiv — but though they’ve defied US intelligence predictions that the city would likely fall within one to four days of a full-scale Russian assault, US officials warn that Russian President Vladimir Putin could imminently increase the intensity of the attack.

Stiffer than expected Ukrainian resistance and Russia’s own logistical missteps have bogged down Russia’s advance, US and western officials say, sparking a fragile optimism. The US has also continued sharing downgraded intelligence with the Ukrainians, including about Russian military moves, in an attempt to help Ukraine on the battlefield, two of the sources told CNN.

But intelligence and defense officials closely tracking the Russian campaign say that Putin still holds a number of moves in reserve that could devastate the Ukrainian resistance.

“From a purely military/tactical standpoint, Russia has the manpower and firepower to take Kyiv. No question,” said an American source familiar with the intelligence. “And no matter how much resistance the Ukrainians put up.”

Roughly a quarter of Russia’s amassed troops have yet to enter Ukraine, a senior defense official told reporters on Monday — a potential “second wave,” according to two sources familiar with the intelligence — and defense officials say Putin could yet order a far less restrained bombing campaign, including airstrikes, long-range missiles and artillery.

“They have been slowed and they have been frustrated by their lack of progress on Kyiv, and one of the things that could result is a reevaluation of their tactics and the potential for them to be more aggressive and more overt in both the size and the scale of their targeting of Kyiv,” a senior defense official told reporters on Monday.

And at the end of the day, officials tracking the campaign say, the ugly truth remains that Ukraine is massively outgunned and outmanned — even as Russia has made what military strategists say are a number of obvious blunders.

Already, Russia appears to be ramping up its campaign in the east and the south. In the northeastern city of Kharkiv, Russian forces have launched rocket attacks on at least one residential neighborhood that have killed civilians, according to Ukrainian officials and multiple social media videos geolocated by CNN. Meanwhile, in the small southern city of Mykolaiv, located on an inlet that would be a useful access point for Russians to bring in troops and supplies, the fighting has been among the most intense in Ukraine in recent days.

Concerns about Putin’s state of mind

Perhaps most ominously, western officials are also warily watching Putin, under pressure from crushing economic penalties that have tanked the ruble and caused the Russian stock market to close. They fear those sanctions, combined with the lack of progress in Kyiv, may cause the unpredictable Russian leader to lash out even more.

Senior US lawmakers familiar with the intelligence, western officials and former senior US officials with deep experience in Russia have begun to openly raise questions about the Russian leader’s mental stability.

“Putin has been completely isolated, partly because of Covid,” said the American source familiar with the intelligence. “He’s now basically just by himself, completely cut off from most of his advisers, isolated geographically … the only people talking to him are sycophants who are just feeding his resentment.” The source added that the intelligence suggested Putin has not even been listening to his oligarchs — traditionally the people who have had a key influence on his decision making.

Sen. Marco Rubio of Florida, the top Republican on the Senate Intelligence Committee, tweeted Friday that “it’s pretty obvious to many that something is off with #Putin,” hinting that his assessment was based on intelligence briefings. “He has always been a killer, but his problem now is different & significant. It would be a mistake to assume this Putin would react the same way he would have 5 years ago.”

On Sunday, Putin ordered Russia’s nuclear forces into “special combat readiness,” a heightened alert status that the Biden administration has characterized as part of a pattern of unprovoked escalation and “manufactured threats.”

Five days into its multipronged assault on Ukraine, Russia has suffered repeated logistical failures that defense officials and independent military analysts say are largely of its own making. Russian mechanized forces that have been the tip of the spear have often outpaced their own sustainment units carrying fuel and other supplies, leaving the support units open to ambush and stranding forward-advancing forces without fuel in the tank.

“Whether they outran [sustainment capabilities] or whether they just didn’t plan properly for it, or whether they just simply didn’t execute their plan for it, I don’t know,” said the senior defense official. But, “on day 4, they’re running out of gas and they’ve having logistics problems. Our assessment was that they did not believe they would be having those kinds of problems that early on.”

Meanwhile, western officials have cheered on a better-than-anticipated showing by Ukrainian forces, in particular how effective they have been using western-provided Stinger shoulder-fired missiles and anti-aircraft artillery to take down an unknown number of Russian helicopters and fixed-wing aircraft.

“The Russians don’t have complete control of the airspace of the entire country,” said the senior western intelligence official. “In the areas in which the Russian military operations are the most intense on the ground, those are the areas where the Russians have the most control over the airspace in terms of air to air.”

But Western officials still aren’t entirely sure why Russia has held back some forces outside of Ukraine’s borders, or why Russia has not yet carried out the kind of electronic warfare against Ukraine the west had been anticipating — like massive hacking campaigns and attacks on critical infrastructure.

One official said the US believes Russia has been holding back on severing communications on the ground — a tactic the west had expected early but has yet to happen — because the Russian military forces need that infrastructure to communicate amongst themselves.

As for the troops left on the border, it’s possible that Russia has planned the attack in waves in an effort to exhaust the Ukrainians with the first wave and then demolish them with a second wave of fresh troops, according to two sources familiar with the intelligence. It’s also possible, according to one of those sources, that Russia has simply moved cautiously after facing a tougher fight than expected.

At this point, officials said, it’s impossible to put a timeline on how long Ukrainian forces will be able to hold the Russians at the gates of Kyiv.

“I can’t put a number [on how long Kyiv lasts],” the senior western intelligence official said. “I can’t tell you it’s going to be hours or days.