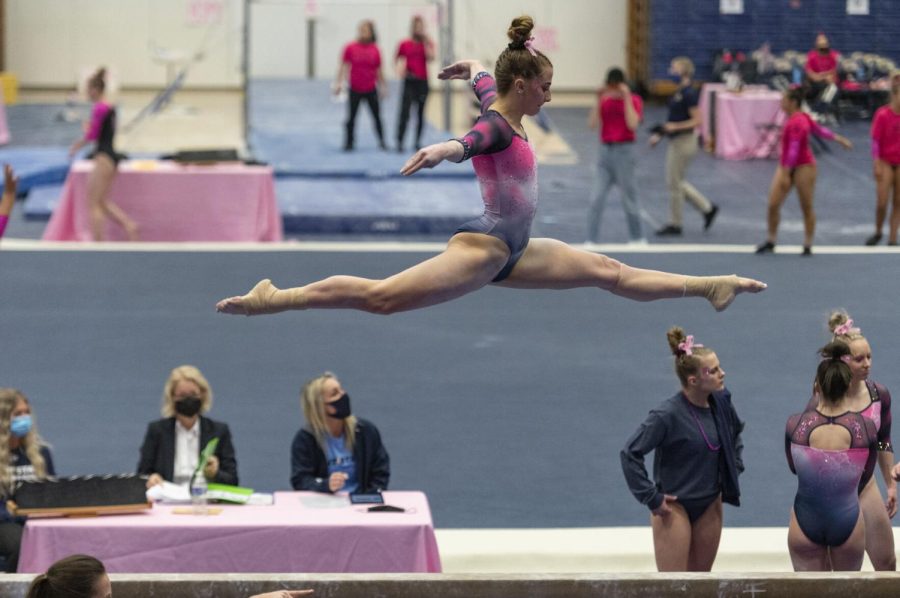 Kent State senior Sarah Haxton warms up on beam during the gymnastics competition against Bowling Green at the M.A.C. Center on Feb. 20, 2022.

With only the beam event left in Sunday’s meet, the Kent State gymnastics team was leading Central Michigan 147.425 to 147.150.

“They held back and tried to make routines, but the problem is you can’t go up and try to make a routine,” coach Brice Biggin said. “You have to go up with confidence knowing you’re going to make your routine.”

Freshman Alyssa Guns, junior Rachel DeCavitch and senior Cami Klein fell off the beam, all posting their lowest scores of the season.

Kent State finished with 47.650 on beam, its lowest event score since February 2020.

“Right now they’re just not being aggressive, and that’s killing us,” Biggin said. “We’re going to have to figure out how we can get them to believe in themselves a bit more.”

After its first loss to a Mid-American Conference team this season, Kent State is now at 3-1 in the MAC and 10-3 overall.

The Flashes lost all four events of the afternoon, and for the second consecutive meet, beam was the team’s weakest event.

“They’re getting into a funk right now where they’re just second guessing themselves,” Biggin said. “On that event, you can’t do that.”

During their last meet on Feb. 20, the Flashes scored 47.900 on beam, which was the team’s lowest score in any event since last April.

To see improvement, Biggin said he is going “back to the drawing board.”

“We’re going to have a long talk about where their confidence level is,” Biggin said. “The tough thing is that practices have gone well. They just get into a meet and change what they’re doing.”

Despite not winning their consistently strongest event, the Flashes scored 49.300 on floor, their second highest floor total of the season. The Chippewas scored 49.500.

The floor routine has been the highest scoring event for Kent State in five meets this year.

“She’s done a tremendous job,” Biggin said. “She looks like she’s having fun, and that’s a huge key. They have to relax enough so they can have fun out there.”

The Flashes compete against Bowling Green, who they previously beat Feb. 20, and No. 16 Ohio State Friday at 7 p.m. in Columbus.

With only three meets left until the MAC Championships, Biggin said his team needs to have confidence in its abilities to take first in the regular season.

“It all comes down to being able to go out there, stay on your feet and trust yourself,” Biggin said. “We need to get back to trusting our training no matter what the event or team is. We have to take it one meet at a time and get back to making solid routines.”