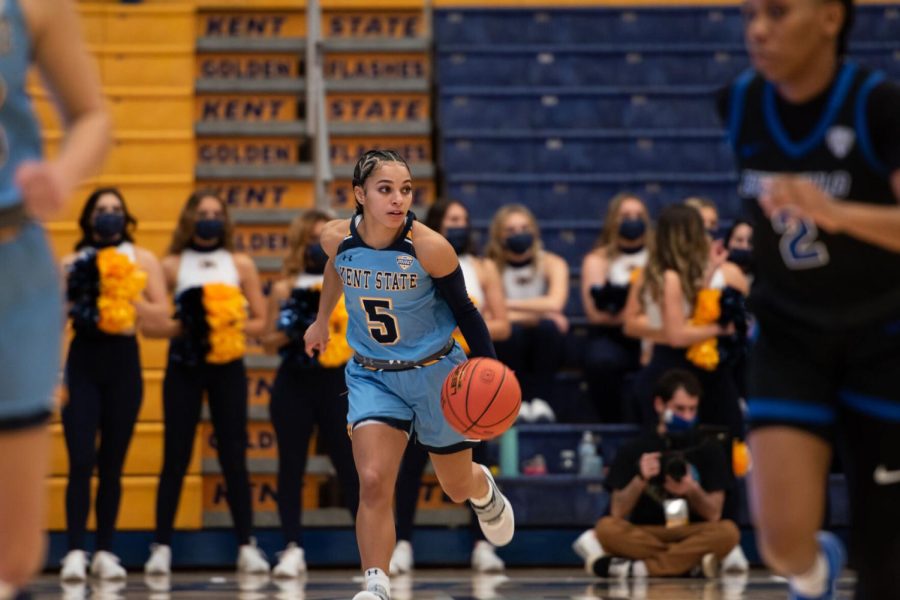 Kent State Senior Mariah Modkins dribbles the ball down the court during the game against University at Buffalo on Feb. 26, 2022.

“Kinda ran into a buzz saw today against a really good Buffalo team,” coach Todd Starkey said. “The tough thing about playing against a team like Buffalo tonight is that they had nothing to lose. They’re already in the tournament, and they can kind of play free and easy. Dyaisha Fair obviously hit some absolutely ridiculous shots.”

The Flashes are in a three-team tie for sixth place in the MAC. The top eight teams advance to Cleveland for the conference tournament starting March 9.

“We could have obviously done some things better, but there are some things to learn from,” Starkey said. “It’s been an up and down season for us and I expect us to be up again for sure and that’s the message to our players, to just keep fighting as long as we have opportunities to keep winning basketball games and extend our season.”

“When this group came in, we were coming off of our only losing season since we’ve been here and won 20 games their freshman year,” Starkey said. “They’ve had a big impact, and they’ve really helped us. They’ve won a championship since they’ve been here. They’re fourth-year players and they all have an extra year. But, the reason why we wanted to recognize them today is because you just never know what is going to happen, and they deserve to be recognized. But, they’ve had a huge impact on the program, and I’m really proud to have been able to coach all of them.”

KSU’s offensive and defensive struggles carried over into the second quarter. Offensively, the Flashes scored just 10 points on 18.8 percent shooting while Kent State’s defense allowed the Bulls to score 25 points on 71.4 percent shooting. The Flashes found themselves down 44-24 at the half.

The Flashes came out of the locker room with renewed energy in the third quarter. KSU went on an 8-0 run and cut Buffalo’s lead to 11.

“We were just being aggressive,” Thall said. “We weren’t getting bothered by [Buffalo’s] length or their fake pressure. We were doing our stuff, and we weren’t letting them take us out of it.”

Kent State outscored Buffalo 20-16 in the third. However, the Bulls took a 60-44 lead into the fourth quarter.

“This was just one of those games where it just got away from us early, but in the third quarter we came out and we changed a few things that we were doing,” Starkey said. “We went on a run, we cut it to 11 points and then certain things happened that were really frustrating to our whole team. I’m really proud of our team for fighting the way they did. They didn’t give up the rest of the way.”

For Buffalo, the Bulls shot 50.8 percent overall and 35.3 percent from behind the three point line.

Leading the way for the Bulls was junior guard Dyaisha Fair with 28 points, graduate student forward Summer Hemphill with 15 points and 18 rebounds and junior forward Loren Christie with 12 points.

“It was just on defensive rotation stuff,” Starkey said. “We were focused a little bit too much on that, but our backside rotations were not good at the start and [Christie] was just getting dump downs for layups. She [Christie] didn’t score again in the game because we fixed our rotation stuff a little bit.”

Each team turned the ball over 12 times and each team converted 15 points off of the other team’s miscues.

Next week is the final week of the regular season in the conference. Next up, the Flashes will face Bowling Green State University (14-13, 9-9 MAC), which is tied for sixth place, on Wednesday at 7 p.m. in Bowling Green.