Community comes together to share memories of Cameron Hopkin 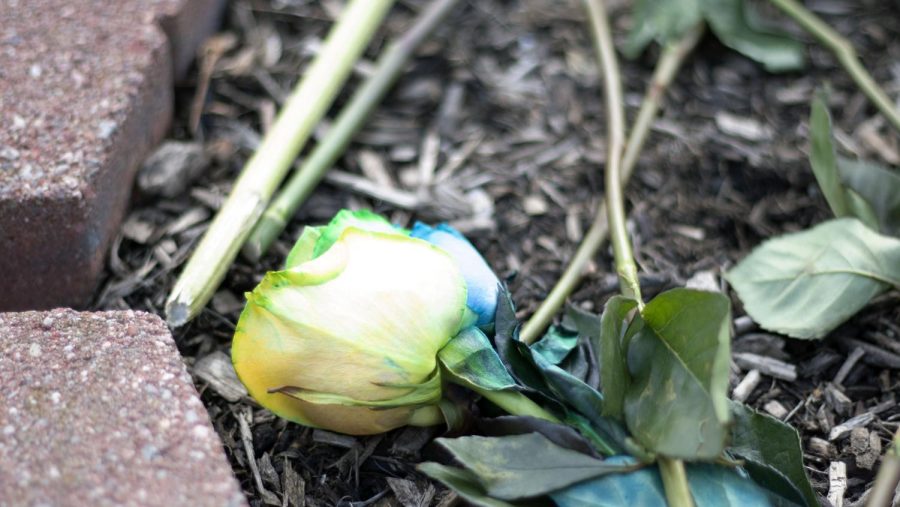 The brothers at the Phi Delta Theta's house laid tie-dye flowers as Cameron was known to wear tie-dye shirts. Feb 3, 2020

Students and faculty huddled together in the Honors College library Monday night and shared memories, happy and sad, of Cameron Hopkin, who passed away unexpectedly over the weekend.

Those who attended were encouraged to speak about Cameron’s life and what he will be most remembered for. Many described how he would light up the room when he spoke. One student said the halls of Stopher feel empty without Cam’s ‘hellos’ and ‘good mornings.’

Erin Ahrens, academic advisor and Honors Leadership Academy instructor said she was close with Hopkin and was happy to travel with him on service trips and learn of his hopes, dreams and biggest passions.

“His heart is what I think of whenever I think of Cam,” she said. “He touched a lot of people as we look around this room.”

A freshman resident of Stopher Hall, Hopkin was a member of the Honors Leadership Academy and had just been welcomed into Phi Delta Theta nearly two weeks ago.

Cameron was so excited to be a part of a fraternity and he had hopes to live in the house next year, Theresa Yogi, his advisor, said.

The Phi Delta Theta brothers, although having only known Hopkin for a short while, all stood at the front of the ceremony and expressed how grateful they were to have known a man so full of love and potential. A sign now stands in front of the Phi Delta Theta house reading “Cameron Hopkin — 964 — In coelo quies est,” meaning “In Heaven there is rest.” 964 was Cameron’s initiation number.

The fraternity was founded on three main principles: Friendship, Sound Learning and Rectitude, and the members agreed that Hopkin was the most qualified to fit all of those principles.

“He touched all of our hearts for the short amount of time he was with our fraternity,” Paul Jatsyshyn said. “He exemplified every one of those principles from the second we saw him. That’s hard to come by.”

Many of those who attended the ceremony remembered Hopkin as a selfless man, someone who only wanted the best for people. As a part of the Honors Leadership Academy, Hopkin traveled with other members and volunteered in service projects.

A student recalled speaking to Hopkin about his faith and how it was so deeply rooted in his volunteer work. Hopkin said he always wanted to give selflessly whenever he could. He believed that was what God wanted him to do.

Counselors were available to students during and after the ceremony and Pamela Farer-Singleton Ph.D., Chief University Psychologist at University Health Services, made it clear that students should rely on each other during this difficult time.

“It really takes some time to get through it,” Farer-Singleton said. “You can’t go above it, under it or around it, you really just have to push through it… Take care of each other.”