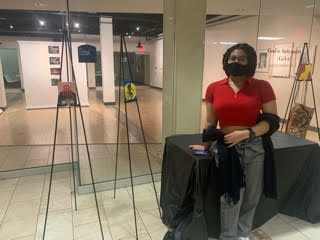 Senior Destiny Franklin showcased her painting of Black women and beauty at the "Unknown Black Heroes" exhibit on Feb. 28

Next to each picture and description of their person, members of the organization acted as an influential Black figure, reading out stories of their part in history.

Marissa Henley, a BUS director, planned the event with the organization.

“I was thinking about how there are so many historical figures that we don’t know about,” Henley said. “I thought, ‘why not have live historical people telling their stories,’ so it’s more interactive and gets people engaged. Sometimes just reading off things is not as entertaining as a model wearing the clothes and being the person.”

Estevan, portrayed by BUS treasurer Landon Robinson, was the first figure highlighted in the exhibit.

Estevan, a Moroccaan slave, was the first non-native person and African American to explore the southwest United States in 1539. He arrived in New Mexico over 40 years before the first colonists came to America.

Through his research, Robinson said he became inspired knowing more about his history-making figure.

“This means a lot,” Robinson said. “Just learning about all the people who had an impact on the life we live today is huge and knowing that people [like Estevan] existed, even though they weren’t the richest of people, and served a big purpose.”

Queen Mother Yaa was also featured in the exhibit. In the 1880s, Yaa Asantewaa was the queen mother of Ejisu, located in present-day Ghana. She led a rebellion, called the Yaa Asantewaa War of Independence, against the British beginning in 1900.

Jemison traveled to space in 1992 on the Endeavor space shuttle for NASA, and she served as an astronaut for six years. She was also an engineer and doctor.

Baccus learned about Jemison at a young age and said she immediately knew she was going to choose the astronaut for the exhibit.

“When I was in the third grade, I did a project on her for Black History Month,” Baccus said. “I already knew so much about her, and I always loved her. Being a Black woman in STEM and seeing somebody else like that was such an inspiration to me as a little girl. It was a dream to act out as her.”

Wangaari Maathai, the first African woman to win the Nobel Peace Prize in 2004, was highlighted as well. She was the founder of the Green Belt Movement, an organization in Kenya that empowers women to help protect the environment.

Davis Jr. was also a strong advocate of desegregating the air force, which was the first branch of the military to be fully integrated in 1952.

Benson said he was inspired to pick Davis because of a family connection.

“My grandfather served in the Vietnam War,” Benson said. “Even though it was two different wars, [acting as Davis] made me feel like I was in my grandfather’s shoes. It got me interested in African American war history. They were forced to fight in wars they didn’t want to fight in. But they still did, and they created history.”

Next to Benson was information about Winnie Mandela, an anti-apartheid activist and wife to former president of South Africa Nelson Mandela. Throughout her life, Mandela worked to end racial discrimation in her country, earning her the name “Mother of the Nation.”

One of her art pieces was of a woman with a comb in her hair. The wooden comb is the symbol for beauty in Adinkra, which is a set of symbols used in Ghana.

“You really don’t see the beautification of Black women, so I put it in her afro to symbolize her beauty,” Franklin said. “Our afros aren’t generally seen as pretty, so I thought it would signify that our afros are beautiful, our afros are golden. We don’t need to assimilate and straighten our hair to be beautiful.”

Like her goal with her artwork, Franklin saw the show as a way to highlight more of Black culture.

“This is history we don’t normally get to see in class because they don’t really tell this side of history,” Franklin said. “It’s really interesting that we can get this experience ourselves, and that we can get these facts and this knowledge.”

Through the exhibit, Henley said he hoped that highlighting “unknown” Black heroes and historical moments would show how influential Black history has been and continues to be.

“You don’t learn about Black history in school,” Henley said. “They’re even trying to erase critical race theory from schools now, so it is also important to me to bring up that Black education is important, Black literature is important. Black people are very important in history. They’ve helped America, and they’ve helped the world.”