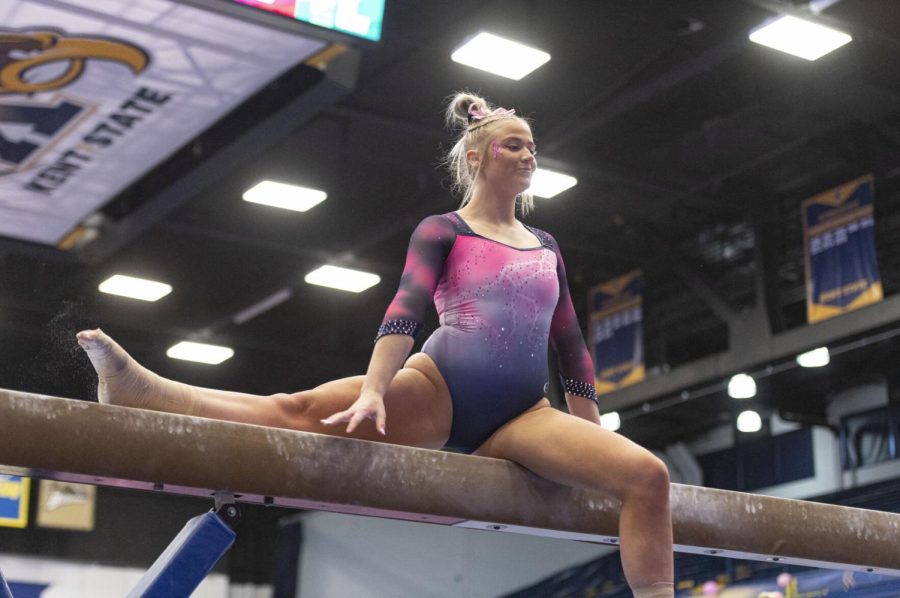 Kent senior Samantha Henry mounts the balance beam during the gymnastics competition against Bowling Green at the M.A.C. Center on Feb. 20, 2022. The judges gave Henry a score of 9.075 for her performace on the balance beam.

In its last meet, the Kent State gymnastics team scored its worst event score in two years on beam.

This week, the Flashes scored their highest on beam since March 2018.

“It was something that we really needed to do, and they knew they were capable of it,” coach Brice Biggin said. “It was so rewarding to just watch the pride in their faces. Sometimes [low scores] get in your head, and you just have to work through it. They have worked really hard in practice in trying to get their mindset straight.”

“It’s nice to have the depth that we have,” Biggin said. “They understand if they don’t do that they’re not going to make the lineup, so it elevates the whole level of the team.”

KSU is tied for first in the MAC with Central Michigan at 4-1 and 12-4 overall. Eastern Michigan remains in last at 1-4 in the MAC and 5-12 overall.

The Flashes placed first on beam with junior Rachel DeCavitch, who scored a season-high 39.325 in the all-around, and senior Riley Danielson placing second with 9.875.

On beam last Sunday, KSU had posted its worst score of any event since February 2020, losing to Central Michigan.

Biggin attributes the improvement to the team working on skills from a different event.

“We spent a lot of time on floor,” Biggin said. “The floor basics are so important because they carry over to beam. So, if they’re working on their movement, their confidence on floor, then we move to beam.”

Kent State posted its highest score of the meet with 49.275 on floor, taking second to the Buckeyes’ 49.425. Four gymnasts from OSU scored 9.900, but junior Karlie Franz took first with 9.925, the highest score of any event in the meet from the Flashes.

“I definitely feel a lot stronger this year,” Franz said. “I have a lot of confidence, and it’s been a lot of fun.”

The Flashes will compete against OSU and Eastern Michigan, which they previously defeated Feb. 6, Sunday at 1 p.m. in the M.A.C. Center.