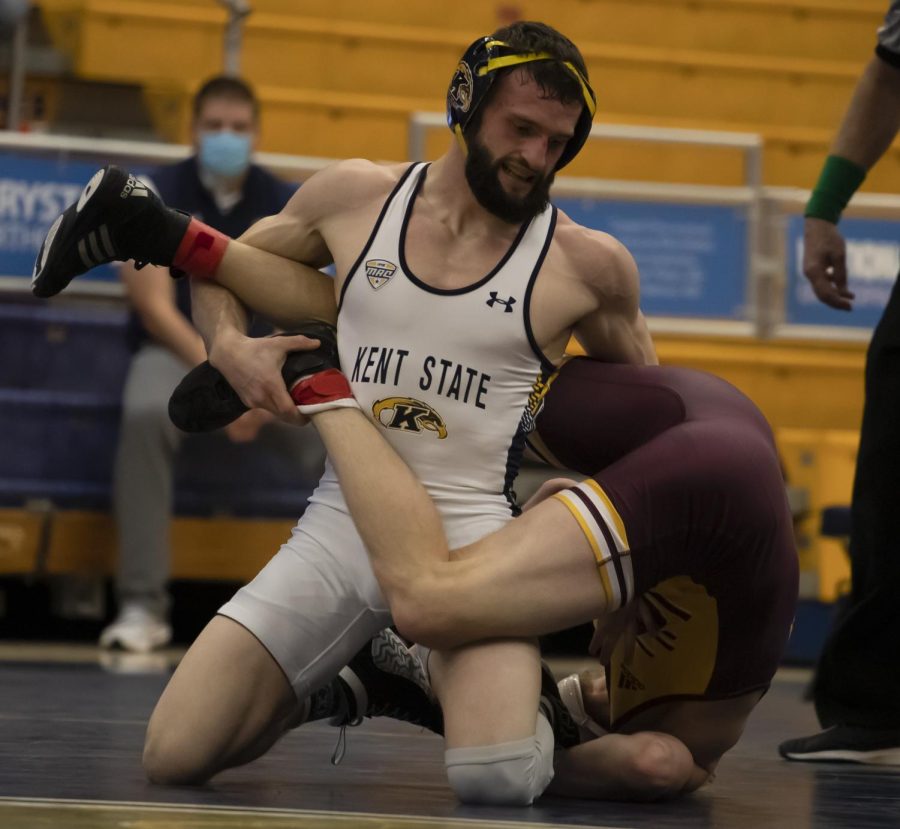 Kent State wrestler Kody Komara became the surprise champion of the Mid-American Conference tournament at 149 pounds when he swept past three opponents to earn a spot in the NCAA Championships.

Komara was Kent State’s only champion. Colin McCracken took second place at 184 pounds and also qualified for nationals. A third KSU wrestler, 125-pound fifth year Jake Ferri, placed third and has a chance to get an at-large bid to the national tournament.

Komara, a senior, was seeded as the seventh-best wrestler in his weight class going into the tournament. But he beat Dashawn Farber of Lock Haven in the quarterfinals in a 6-3 decision and won by injury default over Alex Madrigal of George Mason in the semifinals.

After a scoreless first period in the finals, Komara forced No. 1 seed, Marcus Robinson of Cleveland State, onto his back and pinned him at 4:02 in the second period to run his season record to 16-11.

“He was able to put together great matches this week,” coach Jim Andrassy said. “We talk about consistency day in and day out, and when Kody wrestles consistently, he’s as good as anyone.

“I’m very proud of how composed he was and the accomplishment — not only for himself but for Kent State.”

Andrassy said Komara’s 149-pound class was the toughest in the tournament.

McCracken, a fifth-year senior who was seeded second, was able to secure his place at nationals with a true second-place victory at 184 pounds. After losing to top-seeded Brit Wilson of Northern Illinois 8-0 in the championship match, he had to beat the winner of the consolation bracket for the NCAA bid.

McCracken posted a 9-4 decision over Kyle Davis of George Mason. The KSU wrestler was ahead 8-1 with 50 seconds left in the match.

McCracken went 3-1 in the tournament and is 15-9 this season.

“Colin had a great weekend,” Andrassy said. “He wrestled as well as he could, and it was the best I have ever seen him wrestle in his career. His weight class is tough, but he was able to find a way to win all the way to finals.”

McCracken had won nine straight before the championship match.

“I went into the tournament not making dumb mistakes,” McCracken said. “I had a few moments where opponents blessed me and made some mistakes that I was able to jump on. I stayed with what has been working for me these last couple of months.”

McCracken said he realizes that each wrestling match could be his last.

“The best match was the final true second match,” McCracken said. “That could have been the last ever collegiate match of my life. I let it all fly out there and gave it 110 percent. I’m still at a loss for words. I can’t wait to be in nationals and go all out.”

Ferri, who ranked 44th in the country, has a good case for an at-large bid at the NCAA tournament, Andrassy said. Ferri had KSU’s best record this season at 26-9. The NCAA will announce at-large bids this week.

“I gave it my all,” Ferri said. “I gave everything I had, and I hope I get the outside bid for nationals. I feel I deserve it. I lost to a very good wrestler in the semifinals. I wrestled tough and got into a lot of battles, even got my head split open in the quarterfinals.”

Ferri won four out of his five matches, losing only 7-6 on riding time to No 1. seed Anthony Noto of Lock Haven, who is 30-1 this season.

“Jake could have given up after losing in the semifinals,” Andrassy said. “Instead, he was able to streak all the way back and take third and showed me a lot of toughness. Jake knew if he had any shot at getting to nationals, he’d have to place top three.”

“Jake deserves to be there, and I really hope they believe that as well. He had a fantastic season and has beaten at least three of the guys that are currently in the national tournament.”

Redshirt junior Tyler Bates took fifth place at 197 after getting a 3-2 win over Cody Mulligan of Edinboro and looked very strong throughout the weekend, Andrassy said.

“Tyler Bates wrestled great,” Andrassy said. “He started as the eighth seed and ended up beating the fifth and second seed.”

“Louis wrestled with grit but knows he could have done better,” Andrassy said. “I think a big thing for him moving forward — and if he wants to make nationals next year — is confidence, When Louis is confident, he wrestles his best.”

Noah Keeney is a reporter. Contact him at [email protected]