Shots won’t fall, but Kent State does at home 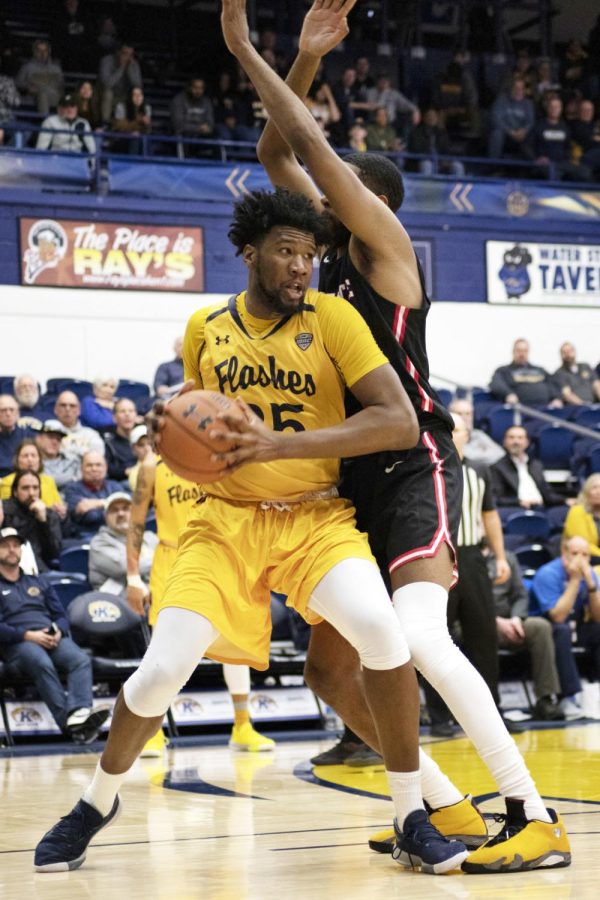 Senior forward Philip Whittington (25) attempts to make a shot during the men's basketball game on Feb. 4, 2020 against Ball State. Kent State lost 62-54. Whittington scored a game-high 18 points on 7-for-10 shooting.

Eight minutes and thirteen seconds into a game against Ball State University, the Kent State men’s basketball team was in a dominant position.

After a layup made by junior forward Tervell Beck, the Flashes were up 17-5, but this would prove to be the zenith of the Flashes’ performance.

Ball State would creep back in the game and take a lead into halftime that the Flashes would never overcome, losing 62-54.

“We came out with the right energy,” said senior forward Philip Whittington. “We jumped on them, but we didn’t sustain it for the whole 40 minutes. … We beat them up and then we get complacent and we let them back [in the game].”

Whittington did what he could, scoring a team-high 18 points while grabbing seven rebounds and two steals, but the Kent State offense collapsed nonetheless.

“We’ve done this before,” coach Rob Senderoff said. “We start shooting bad shots or not moving the ball the way we are supposed to, and all of a sudden they scored nine out of the last 10 to end the half.”

Only one other Kent State player scored in double-digits, that being sophomore guard Anthony Roberts, who had 12.

A major cause of the lack of production from Kent State was dismal 3-point shooting.

“We have never shot the ball quite this poorly, I don’t think ever,” Senderoff said.

Kent State’s usually potent outside scoring disappeared entirely as the Flashes would finish 1-20 from beyond the arc.

The only three the Flashes made came just over five minutes into the game, when senior guard Troy Simons hit on his second attempt of the night.

Simons, who came into the night leading the MAC in 3-point makes, would go cold from there and finish the game with five points on 1-6 shooting from range.

On one of those missed 3’s Simons kicked his legs out and thought he was fouled, but no call was made until something Simons said drew a technical foul from the referee.

Fellow senior guard Antonio Williams also struggled with the referees, as he got into foul trouble early and would foul out with 4:55 left in the game.

Senderoff said Williams being in foul trouble impacted his ability to produce on offense, and this seems plausible as the Flashes’ leading scorer finished with just seven points and four turnovers.

Unlike its offense, the Kent State defense performed well, holding Ball State to 62 points on 38.2 percent shooting from the field, actually lower than the Flashes’ FG percentage.

“It’s not like we didn’t try; we tried, we just didn’t make the plays,” Senderoff said. “When a team scores 62 points in your gym you are supposed to win, but tonight we couldn’t make a shot.”

Kent State is back in action on Friday, as the Flashes will try to avenge their previous home loss and travel to face Northern Illinois University.

Whittington is not concerned about a repeat shooting performance from his teammates.

“We know we are a better team than what we were tonight,” he said. “Guys are definitely gonna go to the gym or do whatever they gotta do, and they’re gonna be better. Honestly we are pumped up for Friday, so we’re not worried.”

Owen MacMillan is a reporter. Contact him at [email protected]