Despite the bitter cold, party-goers bar hopped late into the night on Fake Paddy’s Day 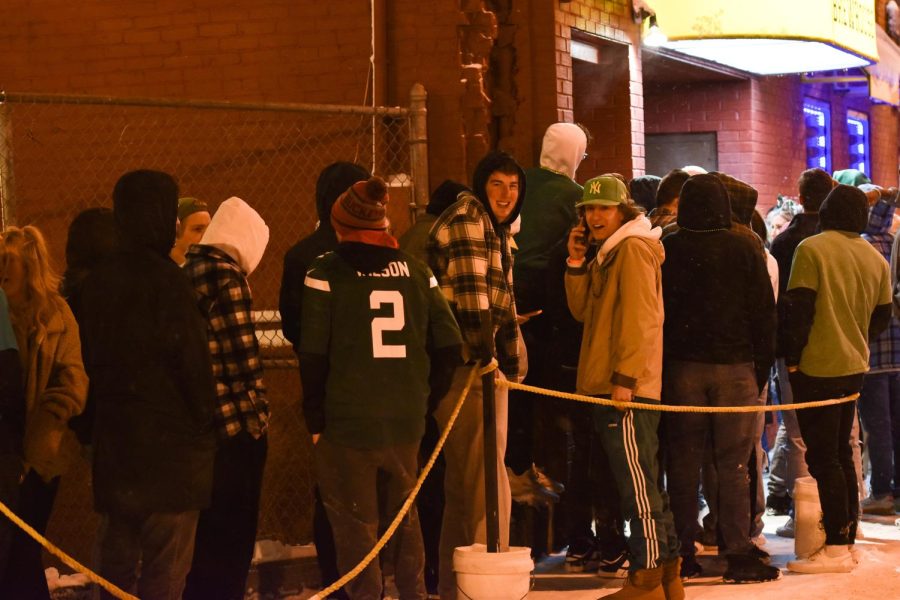 People wait in long lines to get into bars all across downtown Kent despite the cold during Fake Paddy's Day.

A blizzard that brought frigid temperatures well below 20 degrees was not enough to stop hundreds of Kent State students from descending onto downtown Kent for annual Fake Paddy’s Day celebrations.

“It’s snowing, there’s no good reason, but we’re all here,” said Johnson Zagray, a sophomore finance major who dressed as a leprechaun and began his festivities at noon. “It’s the fourth best holiday of the year.”

At Barflyy, Angello George found himself in a line that stretched across the entire block, about an hour-long wait, a scene common throughout the night at most downtown bars. After nearly 16 hours of partying, he was determined to keep it going.

“Have fun, you know, that’s what we’re out here for,” George said.

Although some party-goers had begun their celebration in the early hours of the day, others waited until the evening to join the festivities.

“I worked, so I started drinking at 9:30 p.m,” said Anna Kaminski, who drove up to Kent from Akron. “I went to another bar unfortunately, and now I’m just looking for the shortest line honestly. I wish the lines weren’t ridiculous or the weather was better.”

Others drove to Kent from places as far as an hour away. Dylan Archer, for example, drove 45 minutes from Youngstown to meet up with his girlfriend, junior public health major Grace Suarez.

The night, for many, was also a way to make up for lost time due to the COVID-19 pandemic. With Kent now listed in a low transmission threshold, students felt more comfortable with gatherings than in past years.

Cameron Bezos, a Kent State alumni, returned to his alma mater to celebrate with old friends. Bezos chose to end his Fake Paddy’s Day with a late-night meal from D.P. Dough.

The night was not without its incidents, however. Multiple officers were called to Brewhouse Pub for an incident that resulted in no arrests.

A security guard remarked that it was the “same … as always.”

Around midnight, a female student was taken into custody by Kent State police on the front of campus. According to a bystander who witnessed the incident, a police officer approached a group walking on the sidewalk after a person in it appeared to be intoxicated. When the student blocked the officer’s path, the witness said the two struggled in the snow. Seven other officers arrived on the scene – no immediate comment was available from the police.

Alton Northup is a senior reporter. Contact him at [email protected]

Kiara Rodriguez is a reporter. Contact her at [email protected]