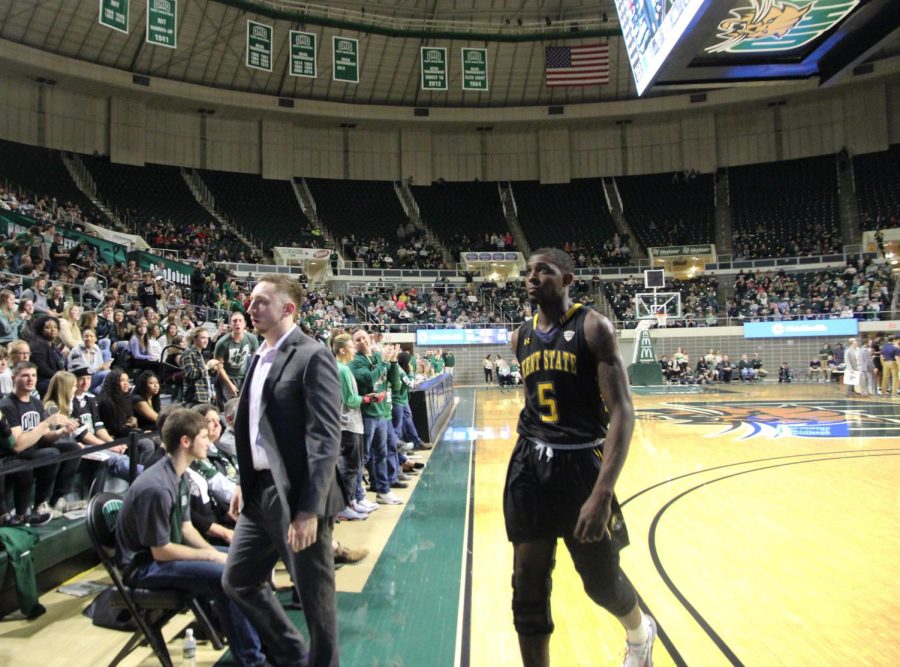 Junior forward Danny Pippen [5] walks off the court after being ejected with five minutes left in the game at the M.A.C.C. against Ohio University on Feb. 28. Kent State lost 76-69.

Junior forward Danny Pippen elbowed Ohio forward Sylvester Ogbonda in the chest following a scrum for a rebound with five minutes left. The play was initially called a common foul, but after a five-minute review it was upgraded to a flagrant two.

“It certainly had an impact,” coach Rob Senderoff said. “Not good for that to happen.”

The ejection of Pippen limited an already struggling offense as sophomore guard Anthony Roberts sat on the bench with a pulled groin he suffered in pregame warmups. Roberts, who donned gold and navy blue warm-ups with grey sweatpants, watched as Kent State struggled to close the final five minutes.

“Anthony hurt his groin in warm-ups,” Senderoff said. “He’ll get with the trainer and we’ll see how he is on Tuesday.”

He scored 21 points on 8-for-10 shooting in the Flashes’ first game against Ohio on Feb. 15. In the absence of Roberts, senior guards Antonio “Booman” Williams and Troy Simons struggled to create shots in the closing minutes.

Kent State’s inability to close and short-handed lineups caused them to lose their third time in four games. The Flashes drop to 18-11, 8-8 in Mid-American Conference play. Here are three takeaways from Kent State’s 76-69 loss at Ohio:

Roberts’ injury came in the minutes leading up to the game, as did Pippen’s injury two games ago against Buffalo.

In recent games, these injuries forced an already inconsistent Kent State offense to produce in the absence of two of its four leading scorers.

Friday night that trend proved too much to overcome as senior guard CJ Williamson started in Roberts’ place, scoring seven points on 2-for-6 shooting.

He could not do that, and his inability to consistently create his own shot forced Kent State to go elsewhere.

2. Ohio guard Jason Preston knifed inside, which created scoring opportunities for himself and others.

In the first matchup against Kent State, Preston scored 20 points, had 12 assists, but turned the ball over seven times. The Flashes scored 25 points off turnovers in the first game en route to an 87-72 win.

Friday night, Preston scored 18 points, had 10 assists and did not turn the ball over once. He also only missed one shot.

His ability to get inside and provide mistake-free passes all over the court helped Ohio shoot close to 50 percent from the field. Even when his passes did not end in assists, oftentimes he forced Kent State defenders to foul. Ohio capitalized, going 25-for-32 from the free-throw line.

“That’s a big difference,” Senderoff said. “We fouled a couple late. We got a couple bad fouls on us that we couldn’t have. That’s a big key. We can’t put a team to the line 32 times in a game and expect to win.”

3. Williams continues to score at a high clip, even as his minutes increase.

After Kent State’s 74-61 win over Miami on Tuesday, Senderoff said Williams would only come off the floor if he asked or if he was in foul trouble.

That statement continues to be true, as Williams came off the floor for a 14-second stretch for a different defensive approach in the closing minute. Aside from that stretch, he played essentially the entire game for the third straight game.

He scored nine points on 3-for-5 shooting in the first half, but was kept out of the lane in stretches in the second half. He attempted four three-pointers in the second half, and Ohio seemed more than content to give him open looks from the perimeter.

4. Simons struggled to provide much over consistent stretches on offense.

Simons’ game is predicated on a flurry of three-pointers over a very short period of time. Although both Senderoff and players have pushed back at the notion of Kent State being a second half team, it is, and Simons embodies that notion.

Friday night he scored 11 points on 4-for-11 shooting, including 3-for-8 from three. He scored six points in the first half and five points in the second half, but the Flashes needed more.

They needed a barrage of three-pointers Simons usually provides in winning efforts. Instead, Ohio defenders suffocated him on the perimeter, forcing an extra pass, which usually ended up in the hands of Williamson or Williams. Both are streaky perimeter shooters, and finished a combined 3-for-10 from three.

5. Ohio forward Ben Vander Plas scored on a variety of defenders, as Pippen and Whittington struggled to provide a consistent deterrent on his drives.

Vander Plas’ ability to shoot from the perimeter and drive inside kept Kent State’s defense off-balance. He shot 1-for-4 from three, but 5-for-8 inside the arc, drawing four shooting fouls.

Although Pippen and Whittington’s absence limited an already struggling offense, Vander Plas was the best forward on the floor on Friday night.

“You gotta give them credit because they won the game,” Senderoff said. “They’re a good team, playing hard, playing well right now. There’s a couple plays here or there we have to come up with, and if we come up with them, maybe the result’s different. Give them credit.”