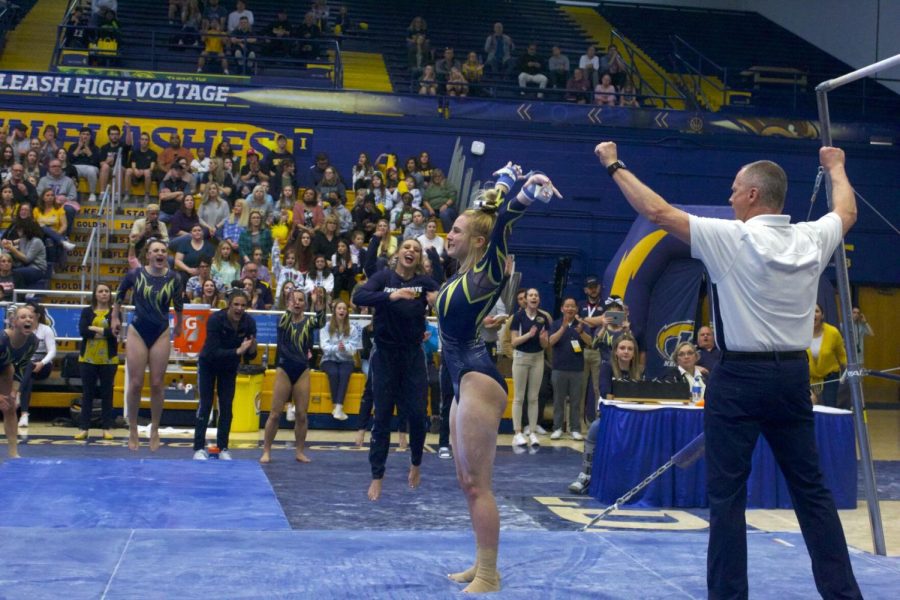 For three consecutive meets the Kent State gymnastics team posted its highest scores of the season, even scoring its third-highest total in program history.

But at the Mid-American Conference championships Saturday, the Flashes fell apart.

“It just wasn’t our day,” coach Brice Biggin said. “It’s certainly not the way we wanted to finish. We just seemed a little off, and we’ve been on such a high for the last three weeks. I’m disappointed for us because of the season we’ve had.”

Central Michigan, which tied Kent State for the MAC regular season title, won the championship with a 196.275. Northern Illinois placed second at 196.125, and Western Michigan third at 196.075.

Kent State had scored higher than CMU’s winning score three times during the season. Only four MAC teams had scored above 196.275 during the regular season.

The Flashes started off the afternoon on floor, their best event, but a misstep from their top-scorer, freshman Alyssa Guns, brought them their worst floor score in their last five meets.

Guns, who had the highest score in MAC at 9.975, toppled forward during the first pass of her routine and finished with 9.400 – .375 lower than her worst score all season.

“Afterwards, I said ‘Listen, don’t let what you did on floor define your day today,’” Biggin said. “She got a little too wound up and made a mistake. As a freshman, you’re going to go through things like that.”

Kent State finished the event with a 49.150, .400 off from its best score this season. The Flashes tied for second place with Northern Illinois.

NIU’s Tara Kofmehl and Western Michigan’s Payton Murphy tied for first with 9.950, the highest scores in any event of the meet. Their scores are still below Guns’ best of 9.975.

On the uneven bars, another usually strong event for KSU, two gymnasts fell.

Sophomore Kennedy Weinpert, second in the rotation, was the first fall from the Flashes. She finished with a 9.075, her lowest score of the season.

In Kent State’s second-to-last bars routine, sophomore Sarah Haxton, who held the second-best average in the MAC, fell and scored a 8.900. This was her lowest score since February 2021.

The Flashes scored 48.200, their worst performance on bars this season.

“This year, I’ve really come into my own,” Franz said. “[Before the championships], I just said to myself ‘Go out there, have fun and be confident. Let’s just go out and have fun together.'”

“There was a lot of energy and a lot of excitement in the air, but I had to get zoned in. There was no time to be scared. I had to be confident and trust myself.”

Franz attributes her consistency to a rise in her confidence.

“My confidence has come up 100 notches,” she said. “Just going out every week and being consistent has really helped me feel good about myself. It’s been the key to my success.”

Kent State came in tied for fourth with NIU on beam with a 49.050. Senior Riley Danielson also tied for fourth, scoring 9.875, a personal-best match.

Junior Rachel DeCavitch tied for second in the all-around with a score of 39.175. She was also named to the MAC All-Tournament Team.

The top 36 teams qualify for the NCAA Regionals. Kent finished 41st. Western Michigan ended in 36th place and is the only MAC team to make it to regionals this season.

“It’s bittersweet because you don’t want to finish how we did Saturday,” Biggin said. “But there’s so many positive things we look at from this team this year. We certainly are so tremendously proud of them.”