Students for Trump work toward re-election 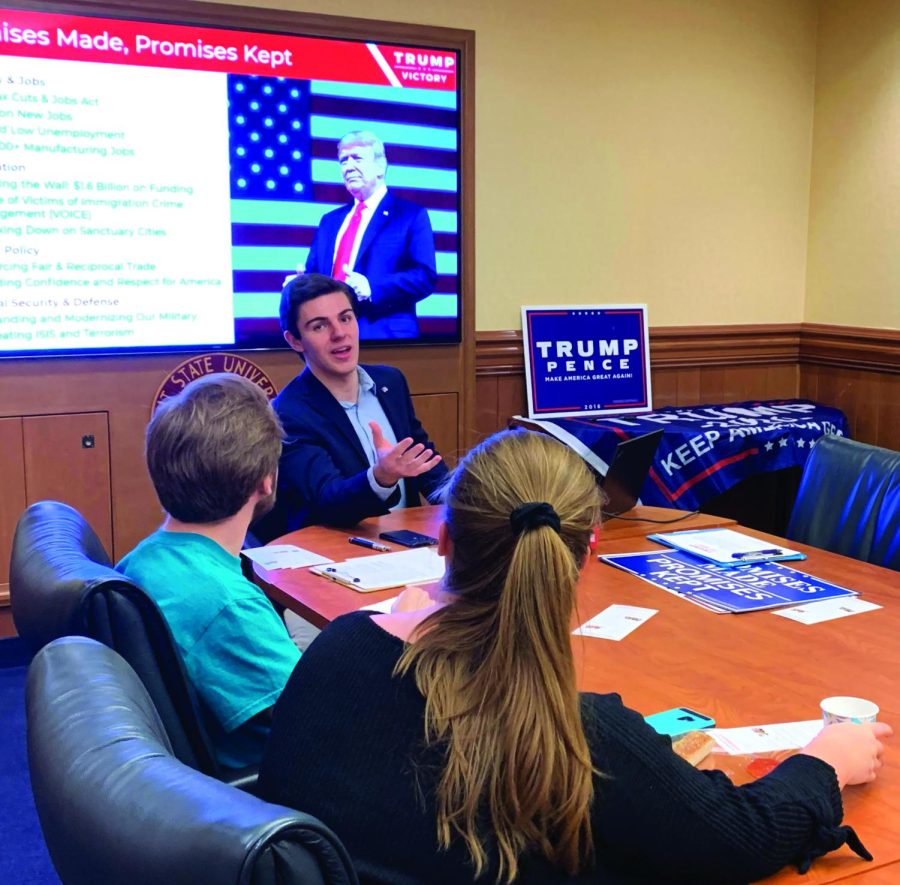 When asked what they like most about President Donald Trump as a group icebreaker, one member of Students for Trump said they felt he fulfilled promises made to supporters on the campaign trail.

For example, the group said they felt secure in finding a job after college with the booming economy.

“The reason I like Trump is he doesn’t put up with bullcrap,” said Ben Adams, a freshman computer science major. “He says what needs to be done and gets it done.”

Students for Trump is a nationwide student organization. The Kent State chapter is one of 300 with meetings held every other Tuesday at 7:30 PM.

The president of the group, Alexa Schwerha, a sophomore communication studies and political science double major, established the Kent State chapter this semester after talking to co-founder Ryan Fournier.

“We wanted to have a space where people that are like-minded can just come together and talk about the issues but also be open-minded,” Schwerha said. “We all have one goal here, but we also have a lot of different opinions within the club.”

Their main initiative has been voter registration.

“We’re out three, four times a week talking to students about President Trump,” Schwerha said. “Making sure that students are aware of voting deadlines and their polling locations, just making sure that they have the opportunity to implement their right to vote.”

At this week’s meeting, member Steven Farhat, a senior education major, discussed how to mobilize support for Trump with a positive social media presence and by holding semi-formal meetings with other supporters and people on the fence called “MAGA meet-ups.”

“I like just meeting up every week,” Griggs said. “I like getting together with people I know and can relate to.”

“The saying does go that life is political, so I think it’s important, especially in any republic or any form of democracy where political participation is king, that if you have any political values that you subscribe to, that you go out and seek people that have the same values,” Fuller said.

Membership is not exclusive to Trump supporters, Schwerha said. Regardless of political affiliation, anyone is welcome to visit.

“We really value that everyone has their own opinion and we’d love to hear and talk to their side too,” Schwerha said. “Civil conversation is very vital to our First Amendment rights.”