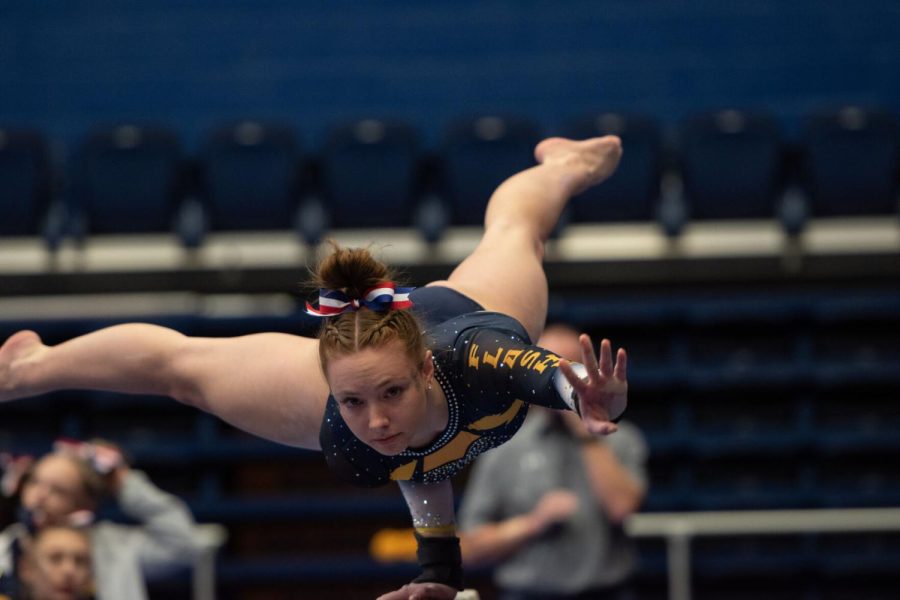 Rachel DeCavitch gracefully ascends the balance beam to start off her routine during the gymnastics meet against Rutgers and Cornell University on Jan. 28, 2022.

Four Kent State gymnasts are headed to the NCAA regionals as individuals.

As a team, Kent State didn’t qualify for the regionals. The Flashes ranked 41st in the country, and only the top 36 teams qualified. But top individuals could make the tournament by ranking in the top 12 regionally in the all-around and the top 16 in individual events.

“It’s critical for us to be represented,” coach Brice Biggin said. “It’s really difficult [competing individually] because they love competing with their team, but we told them the importance of going down there and representing the program and the university the best we possibly can.”

Qualifying for Kent State were:

The Central Regionals will take place March 30-April 2 at Auburn University. Also competing in the region is Western Michigan, the only Mid-American Conference team to make it to regionals. Oklahoma is ranked first in the region and in the nation. The top two teams and the top gymnast in each event who is not on an advancing team move on to the national championships April 14-16 at Texas Woman’s University.

Because Kent State isn’t competing as a team, its gymnasts will warm up with another program and perform their routine at the end of that team’s rotation.

Franz and Haxton are placed with No. 10 Kentucky, and DeCavitch will be traveling the meet with No. 23 Georgia.

Guns will be competing with gymnasts from No. 7 Auburn, one of whom is freshman Sunisa Lee, who won gold in the all-around at the 2020 Olympics and bronze on the uneven bars. She ranks in the top 10 nationally in all four events and the all-around.

“It’s going to be quite an experience for her as a freshman,” Biggin said.

Franz led her team on bars, vault and floor at the MAC championships, tying for third on floor with 9.900. This was her sixth score of at least 9.900 this season.

In her team’s last regular-season meet on March 13, Franz posted a career-best 9.925. She has led the Flashes on floor in three meets this year.

“She’s had a phenomenal season,” Biggin said. “She is certainly one that we look at as a leader and is certainly going to be a huge leader next year. She is just so explosive, and she has the potential to do extremely well.”

Franz ranks 51st nationally in the NCAA’s National Qualifying Score (NQS), which is used for deciding placement in the association’s postseason competition. It takes a team’s or individual’s six best scores — including at least three away meets — then eliminates the highest score. The remaining five scores are averaged.

Guns ranks 56th nationally on floor. She has led Kent State on floor in four meets and has scored a 9.900 or higher four times. Guns has scored as high as 9.975, which she did in her first collegiate meet in January. Her score is tied for 12th highest in the country. Every score above her is a perfect 10.

Haxton led the Flashes on bars for five meets this season. She ranks 78th nationally with an NSQ of 9.870. She posted the best score of her career with a 9.900 March 4. She has scored at least a 9.850 in five meets this year.

“She’s just one of those kids who just loves the sport and loves the team,” Biggin said. “We’ve seen her continue to improve her confidence level. We know that she’s got great talent, and her confidence this year has just been incredible. It’s just been rewarding to see a kid that works that hard.”

DeCavitch was named MAC Gymnast of the Week on March 8 after posting a 39.350, her highest score of the season and the second-highest score of her career. She has scored at least 39.300 in four meets this year.

“She looks fantastic out there right now,” Biggin said. “Her consistency and her strength on every event is what sets her apart because she doesn’t really have a weak event. If she hits all four of her events, I really expect her to do extremely well.”

Biggin said he has high expectations of his top performers.

“They all have the talent,” Biggin said. “They’ve shown confidence all year, so I’m certainly expecting them to be able to go out there and really just relax, have a good time and compete extremely well.”