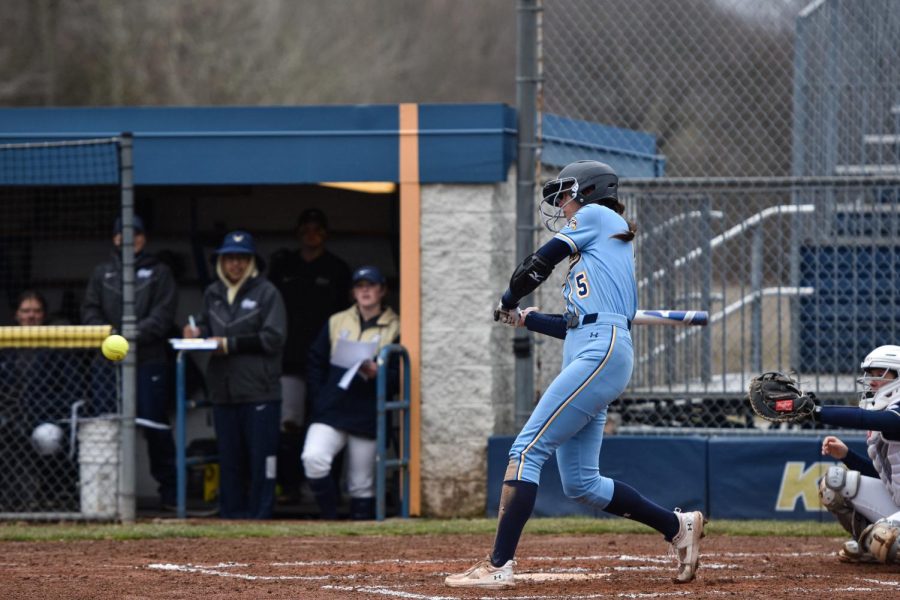 Kent State softball coach Eric Oakley said this year’s team is unlike any he has had before.

The Flashes lost six starters and seven players total from a team that finished third in the Mid-American Conference last season.

“Most years, we might be introducing one or two younger players to a regular role while relying on veterans to get us to the tournament,” Oakley said. “Now, most of our lineup is younger players who are just learning.”

Only three starting batters remain in the lineup from last year, and three of the nine total are freshmen or sophomores.

“At bats are needed to really figure out the grooves and rhythm that we’re going to get into,” Oakley said. “I think it bodes well for the future, but we’re really pressed to get that done.”

Oakley said his team has become stronger at the plate since the beginning of the season.

“Our batting average is going in the right direction,” Oakley said. “And we’re scoring some runs in the last few weeks that we weren’t scoring early on. We’ve improved offensively, but we’re not where we want to be.”

Kent State is coming off a doubleheader split against Fordham Saturday and is now 12-19 overall and ninth in the MAC at 3-8.

In Saturday’s first game, singles from Hershberger and sophomore catcher Emily Lippe gave the Flashes a 2-0 lead in the fifth inning. In the seventh, a single from sophomore outfielder Jade Ramer, a hit to center field by Cole and a double by freshman utility player Savannah Wing pushed the score to 6-1.

“We put pressure on their defense,” Oakley said. “We put a lot of speed out there and put the ball in play to beat it out or force [Fordham] to make a mistake.”

Senior outfielder Brooklyn Whitt, who has the highest runs scored (16) and hits (19) for KSU this season, had two hits and two runs. Sophomore Jessica LeBeau pitched her eighth complete game this season and allowed only four hits and one earned run.

“We know what Jess is capable of,” Oakley said. “She is one of the best pitchers in the MAC, and the performance we saw Saturday was great. There’s been a little up and down, but she’s doing what she should be doing, which is improving as the season goes on.”

The Rams shut Kent State out 2-0 with two home runs in the second game. They had seven total hits compared to three from the Flashes.

“Anilese is someone who can keep another team off balance and give us a chance to win the game,” Oakley said. “It’s a bummer for her that we didn’t get that win.”

The Flashes will play their last non-conference game Tuesday at Robert Morris, which is 18-12 overall and 7-2 in the Northeast Conference. Their remaining 18 games will all be against MAC teams, starting Friday against Northern Illinois.

The MAC tournament, scheduled for May 12-14, will consist of only four teams compared to eight in previous years.

Oakley said he is focused on making the tournament and having his players gain more experience in the final month of the season.

“While we’re trying to win these games that are very important, we’re also looking for players to get better at learning,” Oakley said. “The goal is always to peak at the MAC tournament. We have to figure out a way to climb into that top four, and we’re going to be doing that while we’re growing as a team.”