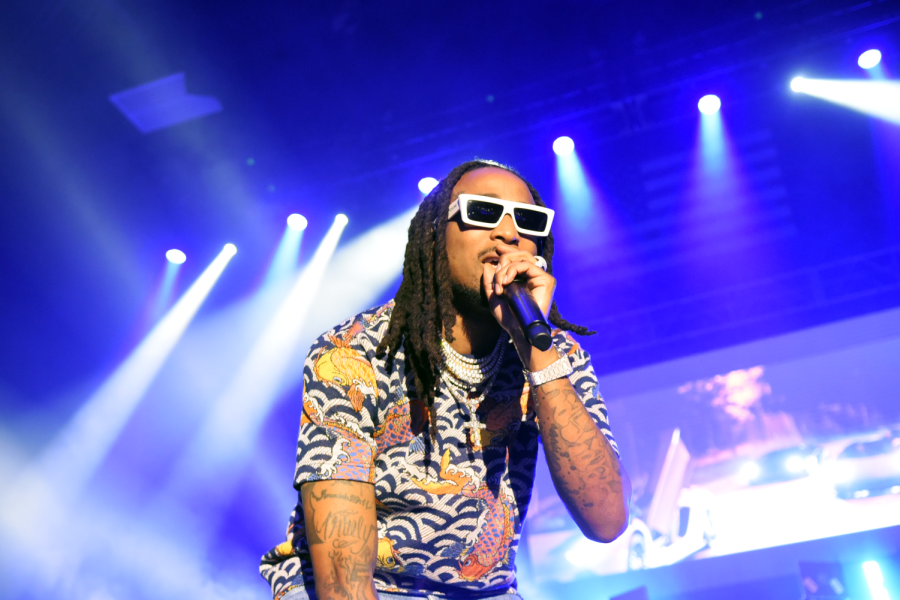 Quavo, the co-founder of hip-hop trio Migos, performs at FlashFest on Thursday, April 14, 2022. Members of Undergraduate Student Government worked quickly to get Quavo to perform after original headlining artist Blackbear, pulled out of the show Tuesday due to COVID-19 exposure.

Cristal Ramirez had one thing to say to the hundreds of students gathered in the M.A.C.C. for the annual FlashFest concert held by the Undergraduate Student Government.

“If you could do one thing tonight, I want you to have a really … good time,” Ramirez, the frontwoman for the indie-pop group The Aces, which featured the event along with DJ Smillz, shouted to an energetic crowd.

The students, many of whom waited hours in line for the free concert, delivered to Ramirez’s request with dancing, cheering and even crowd surfing throughout the night. When headlining artist Quavo, co-founder of hip-hop trio Migos, joined the stage his welcome was like an eruption.

“Quavo was lit for sure,” said Linh Nguyen, a business graduate student.

His performance included Migos hits like Bad and Boujee as well as his solo work, including Congratulations, a song he featured on with Post Malone that has over a billion streams on YouTube. As the crowd sang along in unity, Quavo dedicated the performance of the two-time platinum single to students who worked hard to graduate this year.

The concert, the first one since 2019 due to the COVID-19 pandemic, was a longtime coming. In a disappointing twist for many student ticket holders, former headliner, Blackbear, pulled out Tuesday, just two days before the concert, due to a positive COVID test in his touring group. That is when USG went into overdrive and landed a contract with Quavo the day before the event.

“Within 24 hours we literally finalized the contract, something that usually takes months to do,” Alice Fermaintt, the director of programming for USG, said. “Everyone was pretty much up all night doing this.”

With the new contract came the challenge of rebuilding a concert from the ground up in just one day. It was decided that the event would remain free, a decision made once Blackbear dropped out, but that all previously ordered tickets would no longer be honored. When tickets went on sale again lower-level seating sold out in 45 minutes.

Not everyone was happy with having to reorder tickets, especially those who had seats the first time but missed out during the second sale.

“So I get my lower-level tickets weeks in advance and now I can’t go at all,” read one comment below USG’s Instagram post announcing the lineup change.

Situations like this were something USG tried to avoid, even helping students who reached out to them with getting new tickets.

“With it being a quick turnaround, we essentially had to create brand new tickets, even our paper tickets were no longer viable,” Fermaintt said.

The addition of Quavo to the lineup also brought out students who did not plan on going initially.

“I was not gonna come, I’m not gonna lie, I’m not a fan of Blackbear,” Efrain Cervantes, a sophomore advertising major, said. “But once you say Quavo, I was like, ‘Give me my tickets!’”

Despite the short notice, Quavo delivered a performance many will be sure to remember.

Even with the absence of ticket sales, the night was considered a success by USG.