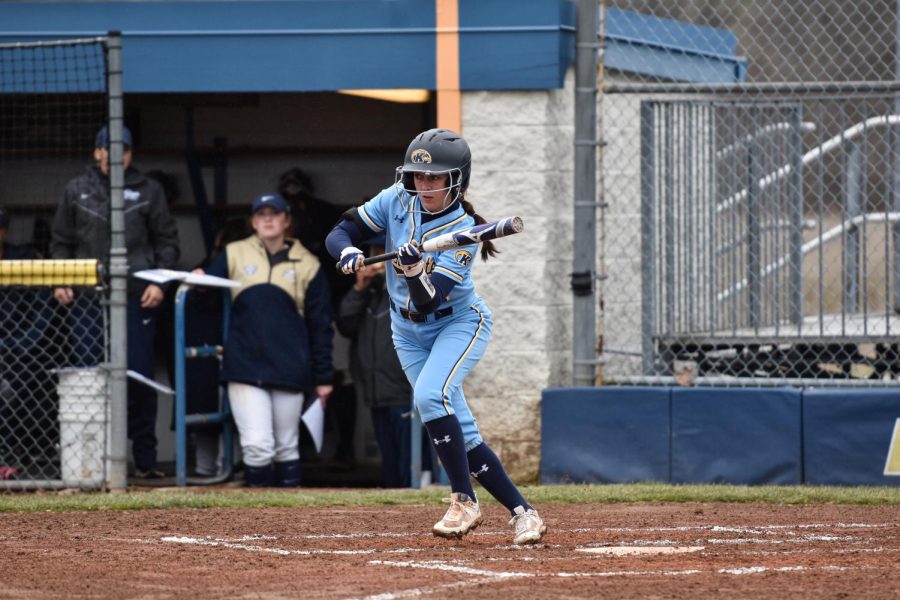 The Kent State softball team defeated Toledo by nine points in Saturday’s second game, its second offensive explosion of the day after scoring seven points in game one.

But in the final game of the series Sunday, the Flashes fell by one point in extra innings.

“We came out and scored right away in [Saturday’s] games, which is always good especially when you’re the visiting team,” coach Eric Oakley said. “But we made some mistakes [in the third game]. We didn’t make them earn anything.”

KSU won the weekend series 2-1 against Toledo, which is last in the Mid-American Conference at 2-17.

The Flashes have moved up to eighth place in the MAC at 7-12 and 16-23 overall. Western Michigan is right behind Kent State at 7-13. Miami has maintained its first place ranking, and Ohio remains in second.

After a 7-4 victory, with nine hits total against the Rockets, the Flashes started off Saturday’s second game with five runs.

“There wasn’t great pitching [from Toledo],” Oakley said. “We’ve struggled with slower pitching this year, so it was good that we adjusted to that, and it was really just about putting the ball in play. They were having fun, which was good.”

The Flashes bumped their lead up to 7-0 in the second inning with a hit from senior outfielder Brooklyn Whitt and a single by Cole.

Toledo had still not gotten on the scoreboard entering the third, and a double from senior infielder Sabrina Kerschner and a single from Whitt stretched KSU’s lead by two more runs.

The Rockets scored their first run of the game with a single in the third, but the Flashes made the next inning their second strongest of the afternoon.

“[In practice], we spent a lot of time on hitting and worked on things defensively that we thought we needed some work on,” Oakley said. “We worked on our throwing accuracy because that seemed to be a bigger problem.”

Toledo came back strong in Sunday’s game, scoring all but one of its runs in the first three innings. The Rockets came out with two home runs total, one in the first and one in the second, for four runs.

The score was 6-0 going into the sixth inning and KSU had only one hit in five innings.

“The pitcher we faced was the one we faced in our first game,” Oakley said. “She had some control issues Saturday that she wasn’t having Sunday. She did a good job of keeping us off balance.”

The Flashes put their first points on the board in the sixth, scoring all of their runs in the game and tying the score 6-6.

“Once we finally settled the pitching down and seemed to stop their scoring, it was just a matter of biding our time, so we had a big inning,” Oakley said. “We’ve been talking about having a short memory, so when something bad happens, we just have to let it go and move on to the next play.”

The game stayed tied until the bottom of the eighth inning. A pitching error, walk and then a single closed out the game for Toledo with a final score of 7-6.

The Flashes play Akron Tuesday at 3 p.m. at the Diamond at Dix. The Zips are fifth in the MAC at 12-9 and the two teams split a doubleheader in March.

In preparing for the rivalry game, Oakley said he sees the potential from his younger players aiding to his team’s future successes.

“There’s been a lot of growth with being to see some of these younger players get experience and opportunity,” Oakley said. “We know who we can go to and that the people that we go to have had experience. You never know where that’s going to help you later down the road.”