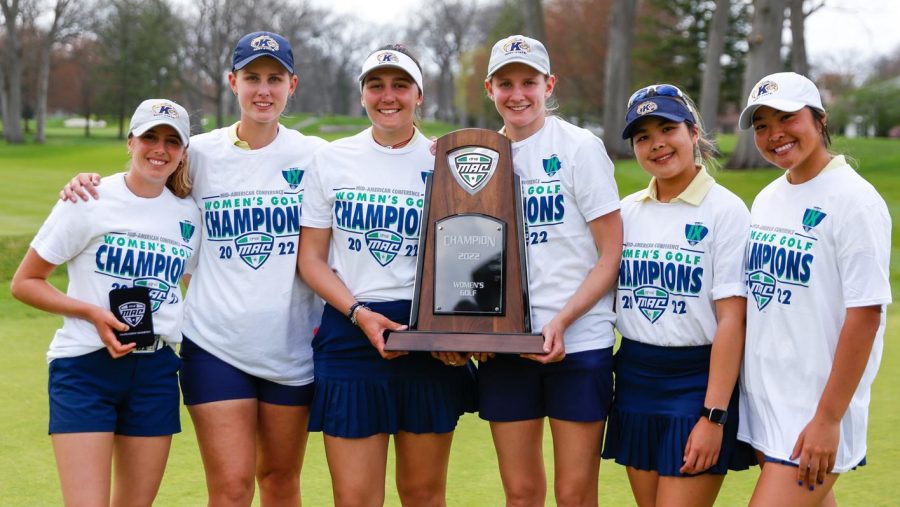 Members of the Kent State women's golf team pose with their trophy after winning the MAC Championship in Holland, Ohio on Sunday, April 24

Fifth-year senior Chloe Salort wiped away tears as she and her Kent State women’s golf teammates rang the victory bell.

“This is very special to me as a fifth year,” Salort said. “I cried; Kent is my second family and it’s incredible to win the conference again. We did it as a complete team and the realization is finally hitting.”

Each golfer and coach rang the bell in between hugging each other.

“The biggest thing was not to think it was my last tournament during the weekend,” Salort said. “I couldn’t let my emotions get in the way of my play and had to focus on the present round and enjoy the moment.”

“I am just happy for the team and proud of them for what they did,” Vandamme said. “We had a lot of people step up at different times. It was a complete team effort, and I couldn’t be more thrilled to win Kent’s 23rd consecutive MAC championship.”

“Chloe and Emily are elite golfers,” Vandamme said. “Even if they don’t have their A-game, they finish near the top of the leaderboard. You can’t say anything better about a golfer than that, it’s amazing to watch them play and continue to grow and get better.”

The Flashes led after each round of the tournament and pushed the competition out of reach, with an 18-stroke lead on the next closest contender, Northern Illinois University.

“This has been the highlight of this season, for sure,” Vandamme said. “To win an event of this magnitude is not easy at all. It took each person to buy in and perform at the highest level each day.”

Salort finished with a 74 in the final round on Sunday to jump teammate Price for second place in this year’s championship. Price was able to stay in the podium, taking home third place.

The Flashes held four of the top eight spots, and the whole team placed inside the top third of the field.

Freshman Jennifer Gu tied for fifth overall and finished ahead of all other freshmen at this year’s championship with scores of 76-76-75.

Junior Mayka Hoogeboom shot a 73 on Saturday and a 74 on Sunday to secure her place in the top 10 and take home eighth place.

Junior Noramol Nuchsila had a top-20 finish to keep the team inside the top third of the 60-player field.

The Flashes are the only school with three athletes representing them for the 2022 All-Tournament team. Salort, Price and Gu were all named to the team.

Price is in the running and has a solid resume to take home MAC Women’s Golfer of the Year, while Gu also has a chance to win MAC Freshman of the Year.

KSU will continue postseason play at the NCAA Regionals in Franklin, Tennessee on May 9-11.