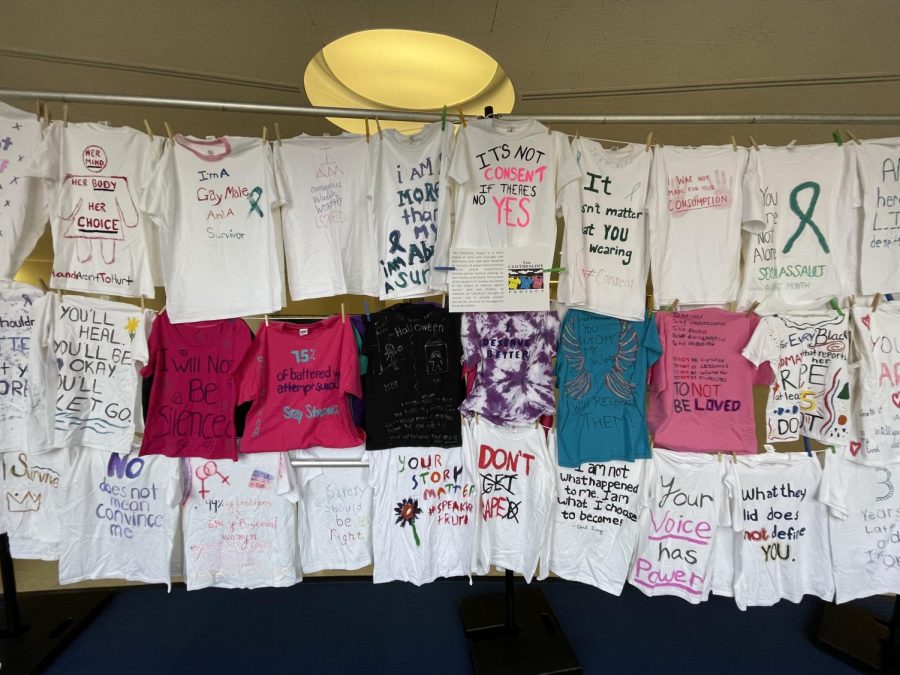 T-shirts decorated by allies and victims of sexual violence to bring awareness were hung up on April 27 and 28 in the student center.

T-shirts on a clothesline hung in the student center Wednesday April 27 and Thursday April 28 symbolize standing standing up against sexual violence.

The t-shirts that were designed and decorated by survivors, friends and family of survivors or allies are all part of The Clothesline Project. This event was put on by the Center for Sexual and Relationship Violence Support Services for Sexual Assault Awareness Month.

“I think it’s really important to see the messages that survivors and advocates have to say,” said Emani Mickens, a senior psychology major and SRVSS student employee.

The shirts are meant to reflect the victim, survivor or ally’s experience with sexual violence according to information provided at the event.

The shirts are color-coded for different representations:

White: those who were murdered due to sexual or domestic violence
Red or orange: those who were sexually assaulted or raped
Purple or lavender: those who have been abused physically, emotionally, verbally or sexually by an intimate partner.
Blue or green: incest or child sexual abuse survivors
Pink or black: people who were attacked because they were assumed to be lesbian, gay, bisexual or transgender
Yellow: allies or those who want to support survivors or victims

“​​I think that it’s really important to notice that students of any age can be impacted by sexual harm,” Mickens said.

The shirt that was most impactful to Alexis Palombaro, a sophomore exploratory student, was a white shirt that said “don’t get raped.” The “get” and “d” were crossed out to portray the message “don’t rape”

“I feel like that was the most impactful for me because as a society, they’ve started shaming women,” Palombaro said. “It’s almost like it’s always their fault.”

Quotes such as “83% of women w/ disabilities will be sexually assaulted in their lives” and “no does not mean convince me” were represented in the designs.

“I think the shirts really do a great job of expressing some of those vulnerable moments that survivors have when healing,” Mickens said. “And what advocates had when they’re trying to meet survivors where they’re at.”

The Clothesline Project is usually done in the fall semester but fell off schedule due to COVID. Mickens wants students and student organizations to get involved in upcoming events.

“With the shirts being anonymous, you don’t know who made each shirt, it can be anybody that you know,” Mickens said. “Anybody can be a survivor and anyone can be impacted by this project.”

Katherine Masko is a reporter. Contact her at [email protected]