Football looks to bounce back from first conference loss 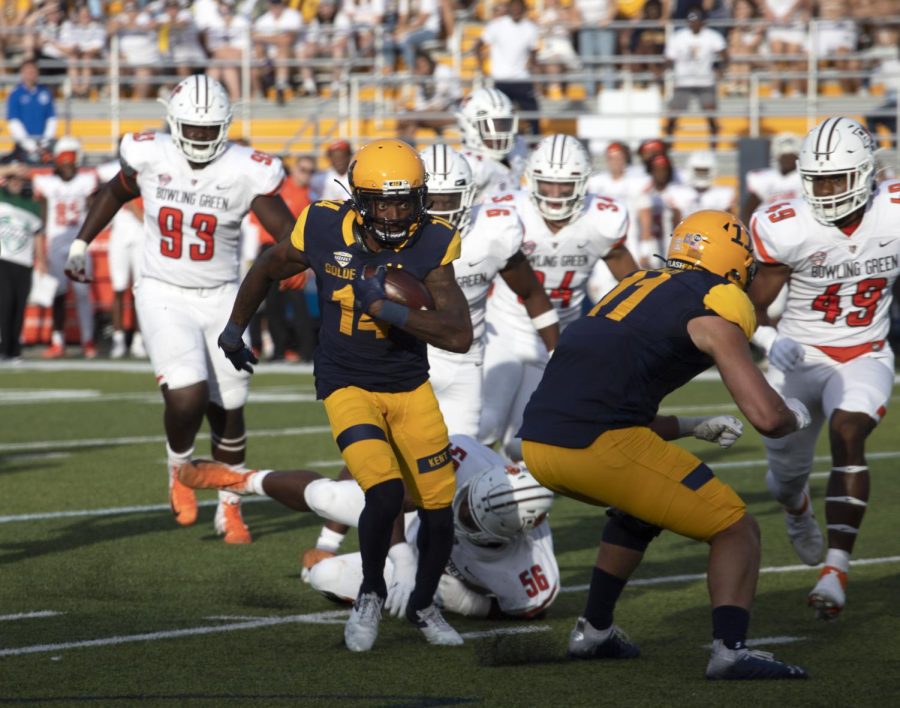 Saturday’s matchup between the Kent State football team and Ohio University will feature two teams coming off of a different, but equally painful, type of loss.

The Flashes were undefeated in conference play, and each of their three losses had come against Power Five teams (Texas A&M, Iowa and Maryland).

And those early season issues would come back to haunt the Flashes, who lost to Western Michigan 64-31. KSU was still in the game at halftime, trailing 23-17. But they would allow the Broncos to nearly double their first-half point output, giving up 41 points in the third and fourth quarter.

“When you come up short, there’s hard lessons that need to be learned,” coach Sean Lewis said. “And the kids take it personally. But, they did a great job owning what they put on tape. Everyone did a great job looking inward and asking where they could be better for the good of the team.”

The Flashes are 2-1 in the MAC (3-4 overall) and are tied for first place in the East Division with Miami.

“We’re still sitting in first place in the East heading into week eight,” Lewis said. “Which is a great position to be, where we control our own destiny.”

OU is coming off of two close losses, both in which they went into the 4th quarter with the lead.

Two weeks ago against Central Michigan, the Bobcats had a 27-20 lead. CMU would kick a field goal, and then score on a touchdown pass with just under four minutes to go, taking a 30-27 lead. OU would go three and out on their next drive, punting the ball away and not seeing it again.

Last week against Buffalo, the Bobcats would jump out to a 21-0 lead in the first quarter. They took a 26-10 lead into the 4th quarter, but the Bulls would score two touchdowns (along with one successful and one failed two-point conversion attempt) to pull within two points. Buffalo would end the game with a six minute, 89-yard drive ending in a game-winning field goal as time expired.

In its first conference game, OU was tied with Akron at 17 going into the fourth quarter, but would score 17 unanswered points to get its only win so far this season.

“Every game, besides a couple, they’ve been in it,” Lewis said. “They’re a very dangerous team, and they know how to win. Just because the record doesn’t indicate that, there are a few plays here and there that could go the other way and that whole record would be flipped the other way.”

OU’s offense is led by redshirt fifth-year quarterback Armani Rogers. Rogers got his first start as a Bobcat against CMU. He had not been a starting QB since September of 2019, when he was the starter at the University of Nevada, Las Vegas before suffering a season-ending foot injury and transferring to OU in the offseason.

Until the game against CMU, Rogers had backed up redshirt sophomore quarterback Kurtis Rourke. He earned the start after coming into the game against Akron and leading the Bobcats to a scoring drive on every single possession he was in for.

Before becoming a starter, Rogers would often come into games and run the ball. He is second on the team in rushing yards (448) and first in rushing touchdowns (6). Last week against Buffalo he broke the record for longest run by an FBS quarterback with a 99-yard touchdown. He has six rushing touchdowns.

“He has the ability to hurt you in a lot of different ways,” Lewis said. “He can make plays with his arms and his legs. When it comes to the moment of truth, we have to get off blocks, and we have to bring him to the ground.”

The Bobcats currently have the second-worst passing offense in the MAC, only averaging 144.6 yards per game. They have the least amount of passing touchdowns with only four.

“At times we panicked,” Lewis said. “And we lost our technique. [WMU] has really good players across the board, and we knew that going into it. [The secondary] had done a tremendous job of shutting down really good wide receivers up until that moment, and we’re going to continue to have faith and trust in those guys.”

The Flashes defense had come into the game against the Broncos second in the FBS with 12 interceptions and third in the NCAA with 16 turnovers, but they failed to force one in the loss.

Fifth-year cornerback Elvis Hines is second in the MAC in passes defended with nine. Redshirt junior cornerback Montre Miller is fifth with seven.

Ohio may not be the best passing offense, but they are one of the best rushing offenses. They are third in the MAC with 201.7 yards per game. Outside of their mobile QB, the Bobcats’ primary running back is redshirt fifth-year De’Montre Tuggle. He has rushed for an average of 70.6 yards per game, and he had 201 yards against Akron.

KSU is 10th in the MAC in rushing yards allowed per game (213.9). It has particularly had issues stopping the run in its last two games. Buffalo rushed for 312 yards and the Broncos for 341.

“We have proven time and time again that we’re capable of doing great things,” Lewis said. “When we don’t play with that focus, intent or great fundamentals then we’re going to get exposed.”

The Flashes are eighth in the MAC in passing with 226 yards per game. Graduate student quarterback Dustin Crum has thrown eight touchdown passes and two interceptions. He is third on the team in rushing yards (275) and has six touchdowns.

Crum has not thrown an interception since week one against Texas A&M.

Two weeks ago against Buffalo, Crum had 479 total yards of offense and threw for 407 passing yards, the most by a KSU quarterback since 1997.

The Bobcats’ secondary is third in the MAC in yards per game with 194.7. But they are the second-worst in passing completion percentage (67) and are allowing 243 passing yards per game in conference play.

The Flashes are the third-most sacked team in the MAC, and Crum was sacked six times last week against WMU.

Lewis said the offensive line needs to “lean back on the techniques and fundamentals.”

“We have a lot of people that have played a lot of football up front,” he said. “And when they do it right, it looks clean. There are some technique things where we underset or overset, and when we get in those situations where we’re forced to throw the ball, those guys can pin their ears back. We got to be right and we got to be sound.”

Redshirt senior safety Tariq Drake leads the team with two interceptions. OU may be without redshirt sophomore safety Jett Elad, who leads the team in pass breakups despite missing the last two games due to injury.

The Flashes are second in the conference in rushing yards per game (223) and in touchdowns (16). They struggled to get anything going last week against WMU and only rushed for 124 yards. That is their second lowest total this season, with their worst coming against No. 11 Iowa, who has the seventh best rushing defense in the country.

Sophomore running back Marquez Cooper leads the backfield with 508 yards and four touchdowns this season. Graduate student Xavier Williams is second with 318 yards.

The Flashes could be in store for a big day on the ground as the Bobcats have the worst rushing defense in the MAC. They are allowing an average of 228 yards per game.

OU does have a prominent defender upfront in redshirt fifth-year defensive end Will Evans. He leads the team in tackles for a loss with five and a half. He also has the most sacks with three and a half.

Lewis said that Evans was one of the defenders that stuck out to him.

“[Evan]’s very twitchy,” Lewis said. “He has good length off the edge, and he has the ability to rush the passer. He’s their best defensive player that we need to be aware of. He can be disruptive in both the run and the pass game.”

The Bobcats also have a good linebacker duo in redshirt junior Bryce Houston and redshirt sophomore Cannon Blauser. The two have combined for nine and a half tackles for a loss and three sacks.

The two teams face-off Saturday in Athens, Ohio at 1 p.m. The game will be broadcasted on ESPN+.