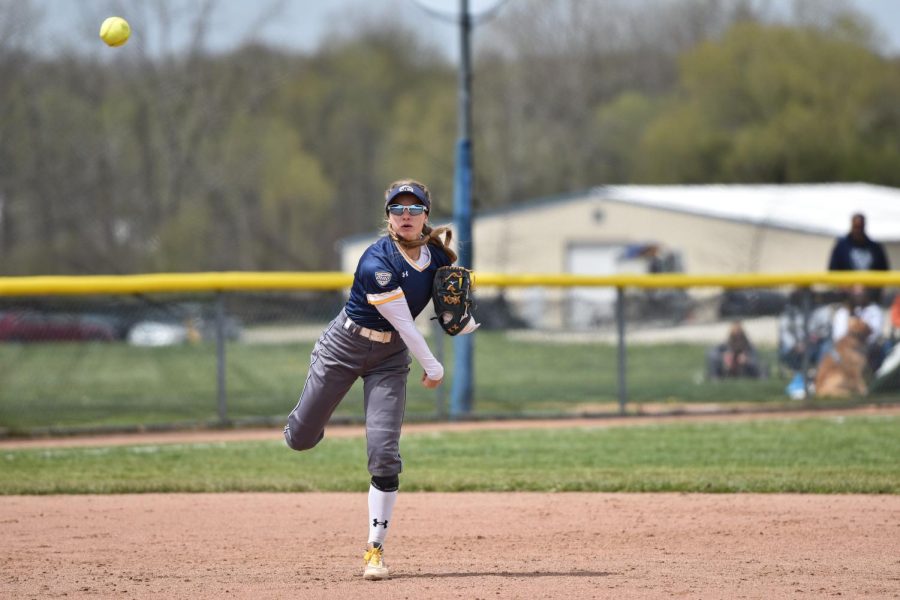 Kent State junior Julia Mazanec throws the ball back to the pitcher on April 30, 2022.

All three games in the Kent State softball team’s weekend series against Western Michigan came down to pitching performance.

“We were evenly matched,” coach Eric Oakley said. “It was just two really good pitchers going at it.”

Sophomore pitcher Jessica LeBeau recorded 22 strikeouts over the weekend, 10 on Friday and 12 in Saturday’s first game. Her strikeouts on Saturday are a tie for her second-highest total of the season.

WMU pitcher Reily Galloway, who pitched against LeBeau, recorded 21 strikeouts in the series.

Despite LeBeau’s showing, the Flashes fell 2-1 in the series.

“We need to do better,” Oakley said. “Western had a very good pitcher, and I gotta give [Galloway] credit for doing really well.”

In Friday’s game, the score stayed 0-0 for five innings.

“Overall, we had the stronger team, but we weren’t able to solve that pitcher,” Oakley said.

WMU had only allowed one hit, a single from senior outfielder Brooklyn Whitt in the fourth. LeBeau allowed three hits for the Broncos in the first five innings.

Then in the sixth inning, a double from Broncos’ junior Alyssa Kramer followed by two errors committed by the Flashes’ defense brought Kramer home to put WMU up 1-0.

Kent State went into the bottom of the seventh still trailing; a single from Whitt put the tying run on base with one out, but the Flashes were unable to get her home and dropped game one.

Western Michigan came out with a new pitcher in Saturday’s first game, and Kent State took advantage with an explosive first inning.

“It’s a pitching-dominated game, and they just don’t have any depth beyond their first pitcher,” Oakley said. “So, we were just able to beat their second pitcher with [areas] where we do have depth. We were able to hold them off.”

The bases were loaded with no outs to start the game after a double from senior infielder Sabrina Kerschner, a single from Whitt and a walk from sophomore catcher Emily Lippe.

Then fifth-year utility player Madyson Cole walked for an RBI. With two outs in the inning, senior infielder Chloe Cruz hit a double to left field, scoring two and increasing the Flashes’ lead to 3-0.

Sophomore outfielder Madison Hershberger came in to pinch hit for sophomore outfielder Jade Ramer. She hit a double into center field to bring two more runners home. Ramer scored on a single from Kerschner, bringing the score to 7-0.

The Flashes ended the inning 8-0 after a single to Lippe allowed Kerschner to come home.

“We felt pretty confident,” Oakley said. “We knew we had a pitcher in the circle [Galloway], and we just knew [she] was looming. So we took care of business in the first.”

WMU got on the scoreboard in the fourth with a home run to left field, bringing the score to 8-1.

Utility player freshman Savannah Wing hit a single to center field, recording an RBI. This closed out the game in five innings for the Flashes with a final score of 9-1.

Game three of the series would feature yet another pitching duel between LeBeau and Galloway.

KSU only managed one hit in nine innings, a double from redshirt junior outfielder Alexandria Whitmore in the bottom of the third.

WMU had recorded three hits through nine innings until the tenth inning, where senior infielder Jordyn Swinehart hit a single to left field with one out. Sophomore infielder Cassidy Brendtke hit a home run out to left field, putting the first runs of the day on the board for the Broncos.

KSU’s fifth-year utility player Brenna Brownfield grounded out to third in the bottom of the tenth. Two more batters struck out to end the game 2-0 and seal the win Broncos.

“The frustrating part is depth wise, we were the better team, but we just weren’t able to squeeze runs across that we should have,” Oakley said. “It, at minimum, should have been a two-out-of-three win for us. It could have easily been that we swept.”

The Flashes play at Buffalo, which is eighth in the MAC at 9-13, Tuesday and Wednesday. Their final series of the season will be May 7 and 8 against Bowling Green, 13-9 MAC, at Devine Diamond.

“When our offense is there, we’re a tough team to beat,” Oakley said. “And we can get the job done with our pitching. We need timely hitting, and until that turns around, we’re really putting ourselves in a bad spot.”