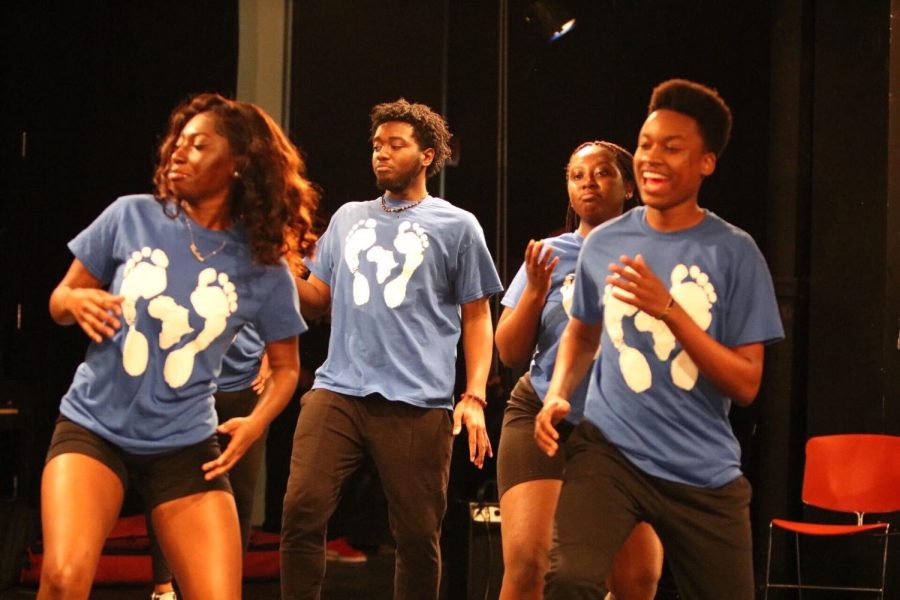 Members of Barefeet Dance Tribe perform at the closing ceremony for the Pan-African Festival on Saturday, April 30, 2022.

The celebration of African cultures can be seen across Kent State’s campus, but it is particularly visible in Oscar Ritchie Hall.

This building, constructed in 1977, houses the university’s Department of Africana Studies, and it also hosts organizations such as Black United Students and the African Community Theater.

This year, for the first time since the start of the pandemic, Oscar Ritchie Hall proudly welcomed students, staff and alumni to their yearly Pan-African celebratory festival.

“The Pan-African Festival is one event that we use to really connect with our community and our alumni in this department,” said Shemariah Arki, an activist and assistant professor in the Department of Africana Studies.

Arki was involved in this year’s planning process for the event, and she said it took a couple of months to get everything organized.

The event committee began planning in the fall semester, and they had to carefully consider COVID-19 restrictions and concerns on the campus.

“Understanding the impact of COVID-19 and this global pandemic, particularly for us as Black people, it’s hitting us hard,” Arki said.

During the planning process, the Omicron variant began to quickly spread in the United States, and after careful deliberation, the committee agreed on hosting a hybrid event.

Some events, such as the performance by Barefeet Dance Tribe, were held in-person, while others, including keynote speakers, were offered virtually for those who could not physically attend.

The theme for 2022 was Legacies of #BlackExcellence, and festivities took place between Tuesday, April 26 and Saturday, April 30.

The five days of events included an opening ceremony with a performance by Djapo Cultural Arts, as well as a photo unveiling at the Umbajii Art Gallery.

Keynote speakers Molefi Asante, from Temple University, and Ron Daniels, who created the Institute of The Black World 21st Century, also attended, as well as a Q&A with Kent State’s Amoaba Gooden.

Gooden is the Vice President of the Division of Diversity, Equity and Inclusion on campus.

Arki was particularly proud of the use of a hashtag for this year’s celebration, noting the importance of social media amongst young activists.

“As we think about Generation Z, and even Millennials, communicating through memes and hashtags has become a way to amplify the message of what’s happening in our communities,” she said.

She implements #be2ksu in her classrooms as a way for students to share news and other relevant content with their fellow classmates on social media.

To Arki, the internet is an exceptional way to stay connected with the modern world.

Her hope for the festival, then, is to encourage connectivity and communication amongst students and alumni, many of which are located in and around the Kent area.

Additionally, Arki is passionate about celebrating Black joy, and she hopes the festival provides a way to do this.

“We have so much hate, so much anti-Blackness, so much oppression that is happening systemically, institutionally, personally, interpersonally,” she said. “And so it’s time, it’s past time, it’s always time for us to celebrate those wins as we decide to soldier on in the fight.”

Arki is one of many who contributed to the festival’s success. One of the weekend’s proud performers was Mwatabu Okantah, an associate professor and interim chair in the Department of Africana Studies.

Okantah graduated from Kent State in 1976, and during his time at the university, he majored in English with a minor in African studies.

After graduation, Okantah spent some time traveling in Western Africa, until he eventually returned to the university as an adjunct professor in 1991.

Now, he is a tenured professor, and he performed his original poetry Saturday during the closing celebration.

“I tell students, I’m a poet disguised as a college professor,” Okantah said.

Okantah has published multiple poetry books and is currently working on a prose book, while traveling across the United States to perform pieces of his work.

Typically, Okantah writes about personal matters, and he tends to include historical elements in his poetry, as well.

He performed alongside some musicians Saturday afternoon and he was excited to be part of the festival after a two-year long hiatus.

“What I hope this week does for our students is to give them an indication of what things can be like,” he said.

Okantah said there are students who have been attending Kent for two years, but they haven’t been able to experience the Pan-African festival due to the uprising in COVID concerns.

Now, as the university begins to loosen restrictions, students are able to return to in-person events.

Not only that, but Okantah said there is typically a decent turnout for Kent State alumni, as well.

With events like the Pan-African festival, students past and present, as well faculty, staff and those in the Kent community, can come together to celebrate cultural diversity.

“It’s a good energy to end the year,” Okantah said, “and they’re already looking forward to next year.”

Morgan McGrath is a reporter. Contact her at [email protected]