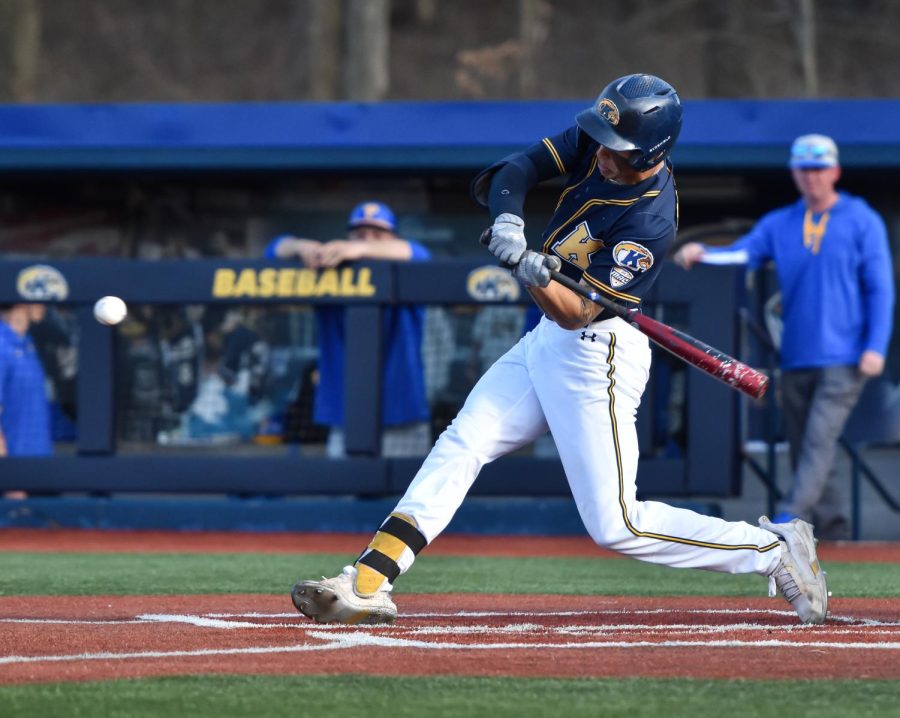 But KSU blew its lead after an aggressive comeback to drop game three and lost the final game to only manage a split.

The Flashes are now 17-22 and 12-14 in the Mid-American Conference, and they are in sixth place in the conference.

Kent State dominated the first game of the series against Akron, winning 12-2.

McNamara then reached second on a wild pitch, where junior left fielder Josh Johnson would single home McNamara for a 3-0 lead. Senior right fielder Justin Kirby followed the single with a two-run homer to left field, and KSU now lead 4-0.

Senior center fielder Collin Mathews doubled to center field, where junior catcher Justin Miknis followed with a double of his own to increase the lead to 5-0, the last run of a great third inning for Kent State.

Nothing came in the fourth inning with both teams going scoreless. However, in the top of the fifth inning, Johnson hit a solo home run to increase Kent State’s lead to 6-0.

The top of the sixth lead off with a Miknis single to right field, and then freshman designated hitter Connor Ashby reached on a fielder’s choice. Timbrook hit a two-run homer to right field and the Flashes now lead by eight runs.

Akron would get its first runs on the day with a two-run homer in the bottom half of the sixth.

Johnson would reach on an error in the top of the seventh and then swipe a bag bringing him to second. Mathews singled Johnson home now and it was now 9-2.

Miknis led off the top of the eighth with a solo home run to left center field. Ashby drew a walk and was followed up by a junior third baseman Payton Pennington single. Then, a two-run single by sophomore first baseman Aidan Longwell earned the Flashes a win via the mercy rule in the eighth by a score of 12-2.

The Flashes wasted no time in the second game. Pennington drew a walk to lead it off and was followed by a Timbrook single. Then Kirby hit an absolute bomb, scoring three runs with the hit going an estimated 460 feet, and Kent State took a 3-0 lead.

Johnson and Mathews hit back-to-back home runs to take a 5-0 lead in the first inning.

Ashby kicked off the second inning with a single and was followed by Pennington reaching on an error. A fielder’s choice put runners at the corners where Kirby scored another on a sacrifice fly. Longwell then hit a two-run home run bringing the lead up to 8-0.

Akron got one run back in the bottom of the second with a solo homer.

Miknis led off the third with a solo home run. Graduate student designated hitter Nick Elsen singled and was followed by a fielder’s choice by Ashby. Ashby reached second on a groundout, where Timbrook would smack a double, scoring Ashby. Kirby hit yet another home run, this one a two-run shot.

Longwell then doubled, followed by an RBI single by Mathews, and the Flashes increased their comfortable lead to 13-1.

After a scoreless fourth inning, Kirby hit a lead off single and reached second on a Johnson single. Mathews doubled, scoring Kirby and bringing both runners into scoring position. A wild pitch allowed Johnson to score an advanced Mathews to third. Miknis singled him home, ending the top of the fifth, with the Flashes now firmly crushing Akron 16-1.

Freshman first baseman Jacob Casey added another run with a solo shot to right field in the top of the sixth. Akron added one run in the bottom half of the inning, however the mercy rule was activated ending the game 17-2.

It was the second straight game that the Flashed had won via the mercy rule.

Kent State had 19 hits in the game, with seven of those being home runs. Redshirt junior Benjamin Cruikshank earned the win giving up just three hits and only one earned run. He struck out five batters in five innings of work.

The Flashes dropped game three despite continuing the hot offense.

Game three didn’t start off well for the Flashes, with Akron starting the game off with a home run. A single and a double put runners at the corners. Another single scored a run, putting runners at the corners yet again. A double play later scored another player, and the Zips had a 3-0 lead to start.

Two errors put two runners on for Kent State. Pennington then singled home a run to bring the lead to within two in the top of the second.

In the top of the fourth, Ashby drew a walk and stole a base putting a runner on second. Timbrook earned an RBI single, and Kent State now only trailed 3-2.

Akron struck back in the bottom of the fourth, leading off with a home run. A single and a bunt put a runner on second. The Zips then doubled home a run, increasing their lead to three.

Another home run for Akron to lead off the bottom of the eighth put Akron up 6-2.

Kent State unloaded in the top of the ninth in a game that seemed to be wrapping up. Timbrook and Kirby hit back-to-back singles followed by an RBI single by Longwell. Johnson then hit an RBI double, and KSU only trailed by two.

A single by Mathews loaded the bases where Miknis hit a ground-rule double, scoring two to tie the game up at six. Senior catcher Sam Thompson scored two on a two-run single to take the lead by two.

After all that Akron was able to steal back the victory. A solo home run and a two-run walk-off home run won the Zips the game 9-8.

Kent had 15 hits in this game, however the Flashes gave up 16 hits in the loss. Freshman pitcher Peyton Cariaco gave up seven hits on five earned runs in 3.2 innings of work.

Akron would strike first in the final game of the series. After a scoreless first inning, an RBI single by Akron in the bottom of the second put it ahead 1-0.

The Flashes got on the board in the top of the fourth after Johnson hit a double to center and Mathews hit him home with an RBI single. A single and a hit by pitch loaded the bases where Kent State drew a walk to take the lead 2-1.

However, Akron regained the lead in the bottom half of the inning with a two-run homer.

Akron struck yet again with another two-run home run in the bottom of the sixth to increase the lead to 5-2.

Kent State made a dent in the lead, drawing two walks and scoring on an error by the third baseman, placing runners on third and second, cutting the lead to two in the top of the eighth.

A throwing error, a single, and an intentional walk loaded the bases for Akron in the bottom of the eighth where Akron hit a two-run single to extend the lead 7-3.

Kent State had 10 hits in the game with three errors. Freshman pitcher Rocco Bernadina earned the loss in four innings of work, giving up three runs on three hits with five strikeouts.