Students, witnesses and community honor 52nd anniversary of May 4 at walk and vigil 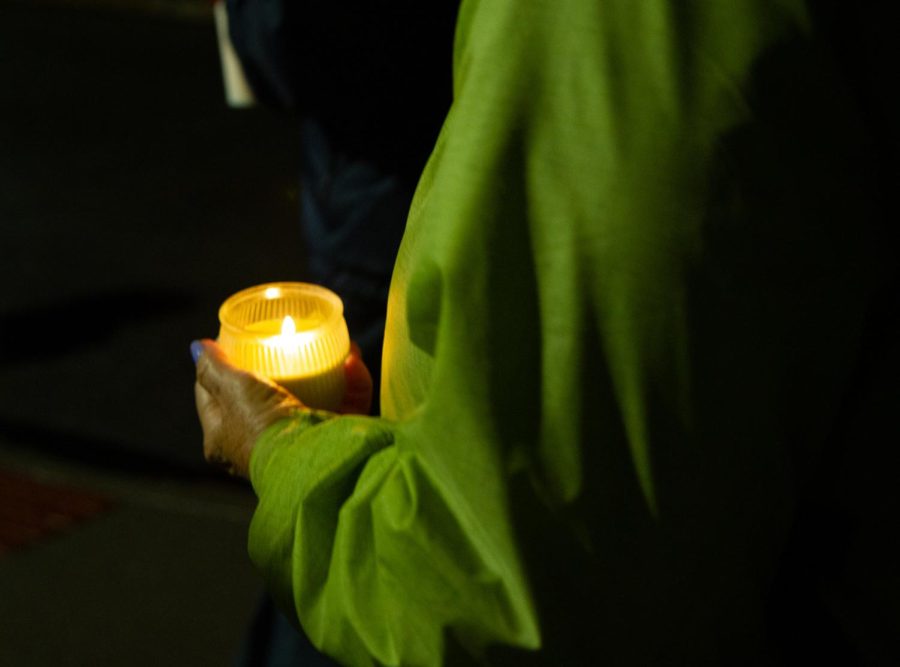 A woman in a bright green jacket held her own candle for the May 4 candlelight vigil on the morning of Wednesday, May 4.

Laura Davis, a freshman at Kent State in 1970, watched the May 4 shooting happen from a distance.

Today, as she does every year, she comes back to retrace her steps and remember the lives of her peers, freshman Allison Krause, sophomore Jeffrey Miller, junior Sandra Scheuer and sophomore William Schroeder, that were lost that afternoon.

“This night is very important,” Davis said, “One of the things I do when I’m here is honor these four students by remembering the sequence of what my experience was on that day and go to each person’s [site], replaying what happened in my mind. I tell them I’m never going to forget them and that other people aren’t going to, that there’ll always be somebody here that remembers.”

Davis, an emeritus professor of English at Kent State, co-created the May 4 Walking Tour and Visitors Center with Carole Barbato, who was a professor of communication studies.

To honor the 52nd anniversary of May 4, the annual walk and vigil began at 11 p.m. Tuesday, starting at the Student Commons.

Members of the May 4th Task Force passed out candles in paper cups to students and community members as they prepared to walk silently around campus.

The rain, which was pouring for more than an hour before, stopped just as the walk began. Attendees started starting on the Esplanade and made their way to the Center for the Performing Arts and back to the Prentice/Taylor Hall lot, where the vigil was held.

At the end of the walk, the group gathered around the tree in the front of the lot, where a plaque honoring the tragedy sits. People offered up prayers then observed a moment of silence.

Afterward, the group began placing their cups around the tree, illuminating it in the darkness. In the parking lot, volunteers stood with candles in the four sites marking where the students were killed. They rotated in 30-minute shifts, continuing throughout the night until 12:23 p.m. Thursday, the exact time of the shooting in 1970.

While Bruce Hyland was not a student at Kent State when the shootings happened, as a former military service member during that time, he said he still finds a special connection to the shooting.

“It was a very important exercise of free speech that was obviously stifled, at least for me personally, criminally,” Hyland said. “It continues to bring me back here every year for these commemorations.”

For Jamie Brian, a Media and Journalism graduate student at the vigil, the impact of May 4 continues to remain important even decades later.

“I just always felt like I had a personal connection just being in a close proximity to such an extreme amount of loss,” Brian said. “May 4 really symbolizes the power of free speech, and that’s something that can never be taken away as long as we stop every year to remember and honor the students who lost their lives.”

The yearly commemoration of this “ark of tragedy,” Davis said, shows how remembering the past is key to creating a better future.

“We can extend it past May 4, to two movements that are happening today: the Black Lives Matter movement and March for Our Lives,” Davis said. “We the people still need to learn the lessons that did begin with the Boston Massacre, and those same lessons are embedded in the May 4 story. There is a notion of ‘if you don’t study the past, then you’re doomed to repeat it,’ and May 4 really connects to the heart of what our country is built on.”