Kent State community gathers for 52nd anniversary of May 4 shootings 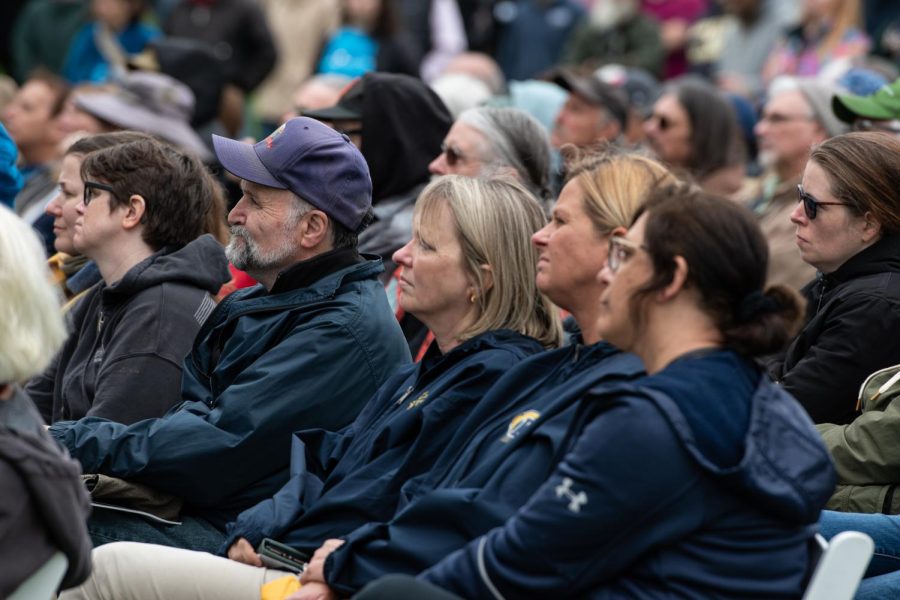 Swaths of people attend Kent State's May 4 Commemoration in the memory of those who were lost.

Thomas Grace, a survivor whose name is synonymous with the May 4, 1970 shootings where four Kent State students lost their lives, rang the Victory Bell on the Commons below Taylor Hall in their memory Wednesday.

“The university, like those of us who witnessed and survived the shootings here, was forever changed that day,” said Roseann “Chic” Canfora, May 4 witness and chair of the May 4 Presidential Advisory Committee. “As many of you know all too well, the university’s legacy as the college campus where American soldiers turn their guns on American students was not a welcome one for a university that, for years, tried in vain to distance itself from a tragedy tied inextricably to its name.”

This was the first sanctioned, in-person commemoration since 2019, but smaller unofficial gatherings occurred in 2020 and 2021.

A sign on the stage read “Long live the spirit of Kent and Jackson State” acknowledging the two students killed May 14, 1970, at Jackson State in Mississippi.

The 26th Amendment allowed 18-year-olds to vote starting with the 1972 election, which Grace said is a “direct consequence” of the Kent State and Jackson State shootings.

“It’s amazing when a social movement can lead to a change in the American Constitution,” Grace said. “But the social movement that began here, that people tried to crush with violence and bullets on May 4, 1970, resulted in a progressive reform to the United States Constitution.”

A crowd gathered on the Student Commons beneath cloudy skies at noon to hear a performance by the Kent State University Chorale and speeches by Canfora, President Todd Diacon, Senior Vice President and Provost Melody Tankersley, Dean of the College of Communication and Information Amy Reynolds and Pulitzer Prize-winning author and historian Jon Meacham.

Diacon said when he was first asked about why the university still commemorated May 4, “it took me aback because I’m an historian and I understand the place of Kent State and the shootings on May 4, 1970 in modern American history, and this alone leads me to understand very well why we should never forget this tragic event and never stop trying to learn lessons from it.”

After the questions didn’t stop, he said, “I blurted out, ‘if it had been your son or daughter killed that day, would you continue to reflect? To honor and remember would you do so if it were your sister or brother shot down that day?’ I think you would.”

Alumni and May 4 witness Chuck Ayers, who was the cartoonist for the Daily Kent Stater when he was a student and had just stepped inside Taylor Hall when the shootings occurred.

“I walked inside of the building and I found out later that just as the doors closed behind me the guard turned and fired right through the area I’d just been standing at,” he said.

Meacham’s speech and historical footage honoring the faculty marshals made this commemoration stand out, Ayers said.

“I think this one was extremely well done,” he said. “Jon Meacham’s speech was one of the best I’ve ever heard, and I knew Glenn Frank was a geology professor who helped disperse everybody after the shooting and saved so many lives.”

Frank was a faculty marshal at the time of the shooting who was credited, among others, with convincing the students to retreat. Audio of Frank pleading with the students to leave the Student Commons played during the commemoration ceremony.

“I’m guessing that might be the first time in 52 years that the sound of his voice rang out on this very spot,” Ayers said. “It’s been 52 years and it still hits me.”

The ceremony also featured other historical footage, including a video of Schroeder’s mom Florence Schroeder speaking of the victims after their deaths.

Dennis Rein was a sophomore industrial design major who was on the practice field on May 4 with his buddies when the National Guard started shooting at students. He knew several of the deceased and wounded students, including Miller, who he met two weeks prior at a party.

“I come back to Ohio once a year—usually I try to time it for around May 4. Not always. Sometimes I’d come back, just come out in the fall. But I will always come out,” Rein said. “I will always go up and say hello to people in the visitors center.”

For some, like sophomore Dustin Moore and junior Jake Rabinowitz, this was the first commemoration they attended.

“I just wanted to show my support and take part in some of the commemoration events that are held on campus this year since they haven’t been able to do anything for the past two years,”  Rabinowitz said. “I wanted to do my part.”

The two students didn’t know much about the events of May 4 before coming to Kent State, but Rabinowitz said he learns a lot from hearing first person accounts from alumni who witnessed the shootings.

“I think it’s just a greater appreciation for what happened and understanding more so. And just to feel more rather than reading about it to hear from people who were affected,” Rabinowitz said. “I think that’s what I’m most seeking to take away.”

Leatrice Urbanowicz was a student at a nearby high school before and during the events of May 4 and considered herself one of the few activists in her school.

“It affected my life deeply and I come every year,” Urbanowicz said. “At the high school I was in there were only a few of us who were vocally anti-war so it was scary.”

Urbanowicz said it is important to commemorate May 4 because it was the start of the end of the Vietnam War.

“It really did help to wind down the war in Vietnam and people were more aware of it,” Urbanowicz said. “It galvanized a lot of people who otherwise would not have stood up and it made me a lot more radical.”

“The university obviously acknowledges it more than it probably did 40 years ago,” Coyle said. “When I was in college, they didn’t talk about it at all …  at least not from the administration.”

Canfora said there’s a notable difference when “university has skin in the game” for the commemoration, after distancing themselves from the shooting in the 1970s.

“That’s all because this university administration was our age in 1970. They weren’t these old cooks that just wanted us to go away. They know the history,” Canfora said. “Our president Diacon is a history major, you know, and so they embrace May 4 as something that is meaningful and relevant to today.”

The commemoration is “in our DNA,” Tankersley said, “as May 4 is a vital piece of Kent State’s history of activism.”

Tankersley said bringing people together is a direct result of the comradery made after the May 4 shooting.