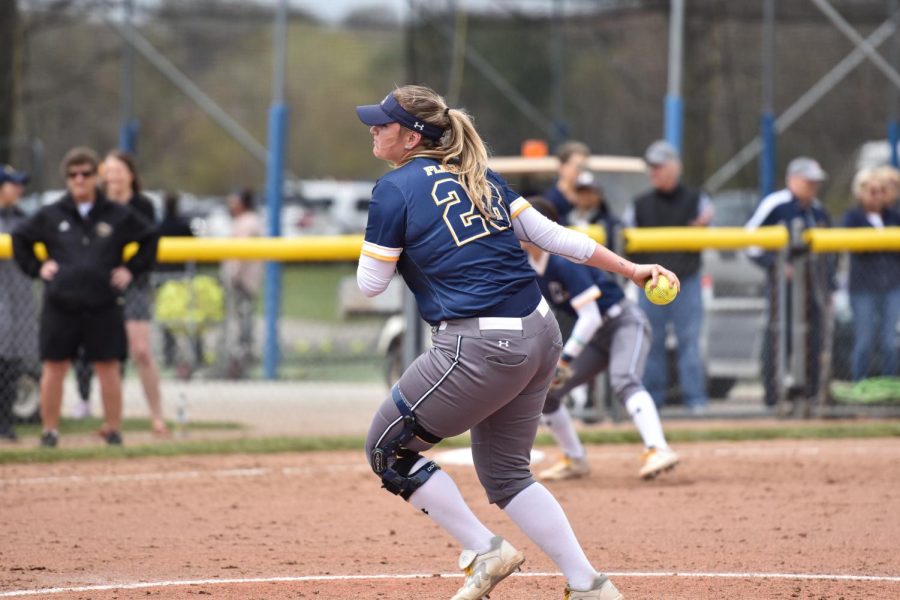 Kent State redshirt senior Andrea Scali pitches during the first game of the doubleheader on April 30, 2022.

The Kent State softball team totaled three more hits than the competition in its series at Buffalo Tuesday.

But the Flashes could not manage to score in either of their two games against the Bulls, falling in both games.

“We out hit them, but we just didn’t get the timely hits,” coach Eric Oakley said. “We didn’t do what we needed to do to get the wins.”

The series’ third game was canceled due to field conditions.

KSU is in 10th place in the Mid-American conference at 9-16 and 18-27 overall. Miami, Ohio, Central Michigan and Bowling Green remain in the top four in the conference. The top four teams qualify for the MAC tournament on May 12-14.

Kent State is unable to make the tournament.

“I wish we were doing more to help her,” Oakley said. “She’s coming along. She struggled a little bit in the middle part of the season, but otherwise she’s just doing exactly what she needs to do to help us.”

The score remained 0-0 through seven innings, and the Bulls had yet to produce a hit.

But Buffalo had its first two, and only, hits of the game, when it mattered most, in the bottom of the eight inning.

The eighth started with a single from Bulls’ sophomore outfielder Sara Kelly, who advanced to second on a bunt on the next play. With one out in the inning, sophomore infielder Rachel Steffan reached first on a hit by pitch. Junior pitcher Alexis Lucyshyn walked-off the game with a three-run homer to give Buffalo a 3-0 victory.

“[We had] hits with two outs and no one on base,” Oakley said. “When you have runners in scoring positions, then somebody’s gotta step up and hit the ball.”

After a hitless first inning for the Flashes in the second game of the afternoon, Buffalo’s graduate student utility player Anna Aguon came out swinging, hitting a homerun. The Bulls’ other hit came from Steffan, who singled then stole second. The inning ended on a strikeout.

Kent State had its first hit of the game in the second, a single to the right from junior infielder Julia Mazanec. Neither team had a run until the bottom of the third, where Aguon hit a single to center field. Steffan reached first with a hit by pitch.

With two outs and a runner on first and second, Bulls’ outfielder Alexis Matheney hit a RBI-single to left field to increase Buffalo’s lead to 2-0.

Buffalo did not have a hit the rest of the game. Kent State got on base three times, with a single in the fifth and two in the sixth, but it could not produce any runs.

“Andrea did great,” Oakley said. “We just didn’t have the offense. We’ve shown that when we’re out there with our starters, the starters aren’t getting it done.”

The Flashes finish up their season back at the Devine Diamond Saturday at 1 p.m. and 3 p.m. and Sunday at noon against Bowling Green (14-9 MAC).

“The time has ended to make adjustments,” Oakley said. “We’re already done Sunday regardless, so at this point, let’s get some other people some experience.”