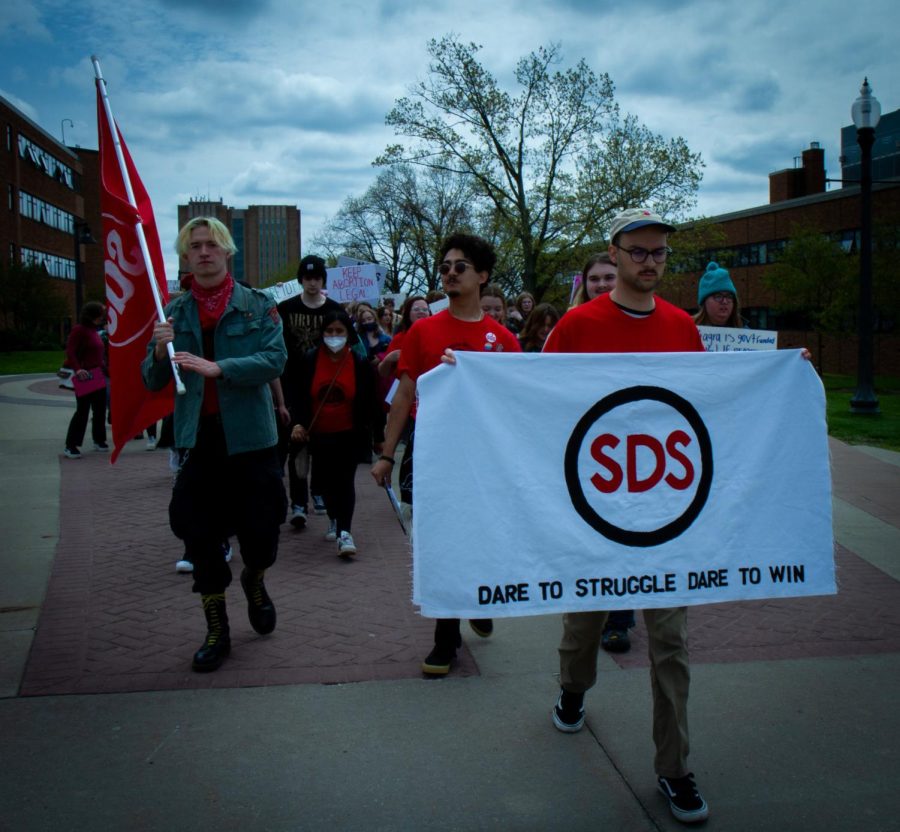 The Students for a Democratic Society led a protest and march for justice for pro-choice rights on Thursday, May 5.

More than 200 students marched across campus Thursday advocating for abortion rights in response to a leaked draft opinion that signaled the Supreme Court may be preparing to overturn Roe v. Wade, the landmark 1973 case that established the right to abortion nationwide.

The draft opinion, first published Monday night by Politico, was authored by Justice Samuel Alito and confirmed in a statement to be authentic by Chief Justice John Roberts. While abortion currently remains legal nationwide, legislation that would ban all or most abortions has been introduced in 29 states, including Ohio, if Roe v. Wade is overturned, according to the Guttmacher Institute.

The protest, which began on the K at Risman Plaza, was organized by Students for a Democratic Society as a call to action for students who support abortion rights.

“It is now a matter of immediate concern,” said Fionna Fisher, a senior sociology major and SDS officer. “We have to get out in the streets, you have to use your voice, get out in the polls, but the most important thing is you can’t wait.”

Organizers lead chants of, “Not the church, not the state, women must decide their fate.” Students also held signs urging the government to stay out of reproductive rights. One sign read, “Keep your filthy laws off my body.”

Students spoke on what Roe v. Wade means for them, shared information on how to stock up on abortion pills and said which states will accept out-of-state patients if the statue is overturned.

Kent State graduate Naomi Pruitt said it is hard to believe women still need to fight for reproductive rights 50 years after Roe v. Wade was initially passed. She said her greatest concern is the harm abortion bans will have on women’s mental and physical health.

“You can’t stop abortions. You can only stop safe ones,” Pruitt said. “The number of women who committed self-harm, suicide, go into depression, have unwanted children, and the toll on their mental health. There’s an endless amount of backfire that will happen from this decision.”

Students also expressed their concerns with the current political climate surrounding the rights of women and minorities.

“As a Black woman, a total abortion ban is a death sentence,” said Gabrielle Blake, a senior paralegal studies major. “The maternal death rate for Black women in Ohio is 2.5 times higher than a white woman. Which means, if I get pregnant, there is a very high likelihood that they’ll think my pain is not my pain and when I die, it’ll just be a mishap.”

In Ohio from 2008-2016, Black women accounted for 29.5 pregnancy-related deaths per 100,000 births while white women accounted for 11.5, according to the Ohio Department of Health. Currently Ohio House Bill 598, if it passed and Roe v. Wade was overturned, would allow life-threatening pregnancies as the only exception for abortion in the state—there are no provisions for pregnancies caused by rape or incest. The lawmaker who sponsored the bill, Rep. Jean Schmidt (R – Loveland), garnered criticism at the protest for a comment she made Wednesday surrounding a hypothetical situation of a 13-year-old who is raped and must carry a pregnancy to term.

“It is a shame that it happens, but there’s an opportunity for that woman, no matter how young or old she is, to make a determination about what she’s going to do to help that life be a productive human being,” she said during a hearing.

Students at the protest were upset about Schmidt’s comments and expressed concern over possible repercussions from the bill.

“Things could escalate, as far as assault and things like that, so I’m even more terrified that I might have to carry a child that I don’t want,” said Lacie Warren, a sophomore digital media production major.

Another concern at the demonstration was the possibility that other Supreme Court rulings could be overturned, especially Obergefell v. Hodges, which legalized same-sex marriage; Lawrence v. Texas, which legalized sodomy; and Griswold v. Connecticut, which protects the right of married couples to use and purchase contraceptives.

“Our rights are on the chopping block and the radicals, not just on the Supreme Court but politicians across the country, are all too eager to take them away,” said Christian Heller, a sophomore political science major.

One member of SDS, sophomore fashion design major Cassidy Ritchey, said she was worried about how this decision could affect other precedents that protect human rights.

“Over time, I’m concerned that this spirals and, one after the other, human rights law will be taken away,” Ritchey said. “For all people, but especially for groups that have traditionally been discriminated against in the past.”

Demonstration organizers were not surprised at the large turnout, even though the protest took place on the first day of finals.

“I think that there’s a very large amount of people who all support Roe v. Wade, and I think that the sheer number of people just shows how unified we are on our stance,” said Xavier Heipp, a senior theater studies major who went to the protest after finishing his final exams early.

Three counter protesters were present at the march—they left shortly after they turned down an offer from the protest organizers to speak.