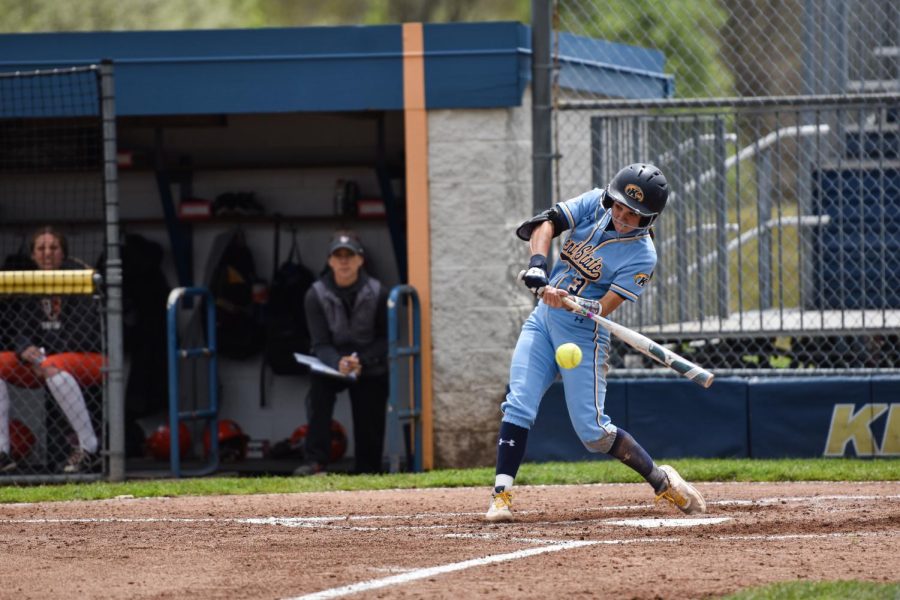 Kent State senior Sabrina Kerschner batts during the first game of the doubleheader on May 7th, 2022.

The Kent State softball team ended its season with a win against a team in the top four of the Mid-American Conference.

The Flashes finished ninth in the conference overall, and they came into the weekend already eliminated from tournament contention.

“The pitcher we beat in the first game is probably going to be the MAC pitcher of the year,” coach Eric Oakley said. “I’m really proud of the team for that.”

KSU won its series against Bowling Green, fourth in the MAC at 16-11, this weekend, splitting its doubleheader Saturday and winning its game Sunday.

Falcons’ sophomore Payton Gottshall, who has been named MAC pitcher (or co-pitcher) of the week six times this season, pitched for BGSU in Saturday’s doubleheader.

“Ultimately, it was a disappointing season,” Oakley said. “We didn’t make the MAC tournament, and that was the goal. There’s work to do, and we’re going to start that work tomorrow.”

BGSU, along with Miami, Ohio and Central Michigan will compete in the tournament.

Kent State started the series with a win in Saturday’s first game against Gottshall.

“For us to beat her, especially when we struggled with hitting as of late, was big,” Oakley said.

BGSU had one run in the first inning from utility player Peyton Dolejs, who was pushed home by a double to right center from catcher Reagan Williamson. KSU pushed back with a run from senior infielder Sabrina Kerschner after senior outfielder Brooklyn Whitt reached first on a throwing error.

Both teams had only one hit in the five following innings.

Kent State broke the tie in the sixth with a go-ahead two-run home run to left field from fifth-year utility player Brenna Brownfield after graduate student outfielder Jada Crittendon, who had pinch hit for sophomore catcher Emily Lippe and reached first on a hit-by-pitch. The game ended in a 3-1 victory for the Flashes.

The score remained 4-1 until the bottom of the sixth, where LeBeau homered to center field, closing BGSU’s lead to two. Bowling Green added to its lead in the seventh with a two-run home run and ultimately won 6-2.

“We had a good opportunity to sweep the doubleheader,” Oakley said. “There was some pressing at the plate, and [our] pitching wasn’t as sharp as it had been.”

Kent State scored in every inning in Sunday’s final game of the series, winning the game 8-0 in six innings.

In the first, fifth-year utility player Madyson Cole hit a home run to left field for two RBIs. In the second, senior pitcher Andrea Scali hit a single to center field, pushing freshman utility player Savannah Wing to home after she had reached first on a single. After a sacrifice hit by Brownfield in the third, Whitt ran home, bringing the score to 4-0.

“Losing Saturday’s game was tough, but coming out Sunday and getting that series win was a good way to finish the season,” Oakley said. “Credit to the pitchers with defense but also to our offense for getting it done.”

“This class graduates with a pretty successful career, with a lot of good accomplishments individually and as a team,” Oakley said, “And academically, they were outstanding. Our seniors have done a good job of giving us a blueprint for next year.”