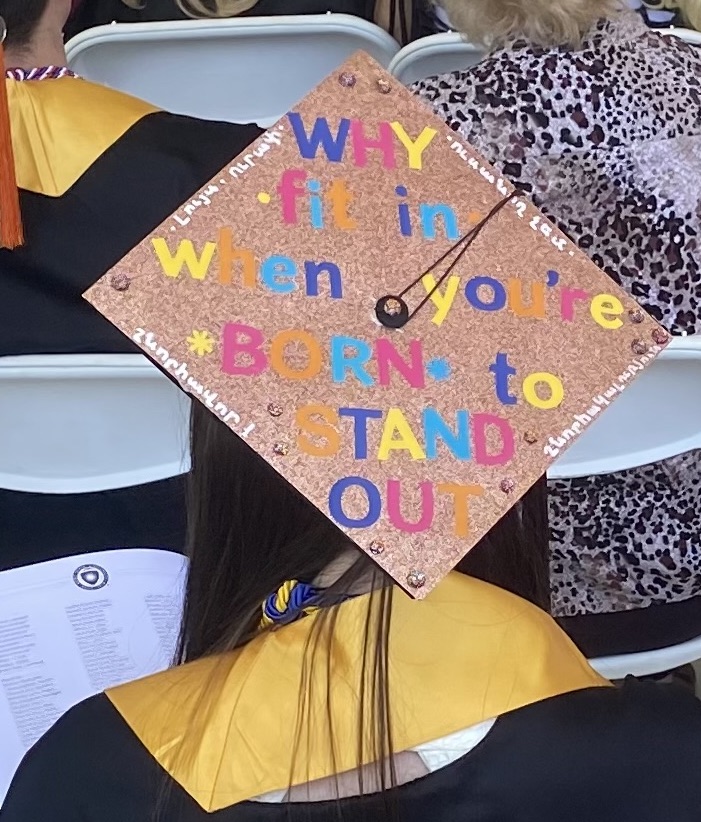 "WHY fit in when you're BORN to STAND OUT" decorated graduation cap coincides with Diacon's speech.

On Thursday afternoon, Sajidah Qurash walked across the stage with her son on her hip and her daughter alongside her. Qurash received her bachelor’s degree in public health. She said it was a great feeling.

Graduates of the Colleges of Aeronautics and Engineering, Applied and Technical Studies, The Arts and Public Health walked across the stage on Manchester Field on May 12 at 1 p.m. Hundreds gathered to celebrate their accomplishments.

Many graduates said they were excited to finally graduate and were grateful for the memories they made at Kent State.

“I feel accomplished,” said Chanya Jackson, a graduate in public health. “I feel like everything I worked for, everything I went through was worth it.”

“It’s weird, especially after the pandemic; it feels like I haven’t been here that long,” said Maia Watts, a graduate in musical theater.

“It feels really good. It feels like I’ve done a lot of hard work, especially with the pandemic,” said Ryan Zielinski, a graduate in fashion merchandising. “A lot of challenges and hoops we went through, and I’m just proud of everyone.”

“It feels great. It’s been a long four years,” said Hope Harris, a graduate with a bachelor of arts. “Fashion school is not easy, so I’m just so happy to be done.”

Pablo Moreno, the father of Chris Moreno, who graduated with a degree in mechanical engineering, said he is proud of his son and can’t wait to see what he accomplishes after working so hard.

“It feels like the weight of the world is off my shoulders,” Chris said.

Kiara James graduated with a bachelor’s in public health with a concentration in community health outreach and development and a minor in nonprofit studies. James’ mother said she is “elated.”

Kent State University President Todd Diacon gave a speech to the graduating class, referencing a band he enjoys listening to, The Grateful Dead. He quoted Bill Graham, owner of the Fillmore West theater in San Francisco and the Fillmore East theater in New York City. Graham had described the band by saying, “They are not the best at what they do. They are the only ones that do what they do.”

Diacon shared Graham’s quote because he wants the graduates to take that message with them.

He also said being your own person can be hard especially when that conflicts with societal norms. He said he wants Kent State graduates to “come back and share your stories and life lessons with future generations of golden flashes.”

“Congratulations,” Diacon said. “You are the star of the show.”

Diacon and provost Melody Tankersley conferred the graduates’ degrees and had them move their tassels from right to left as blue and gold confetti flew into the air overhead.

Kennedy Gotham is a reporter. Contact her at [email protected]