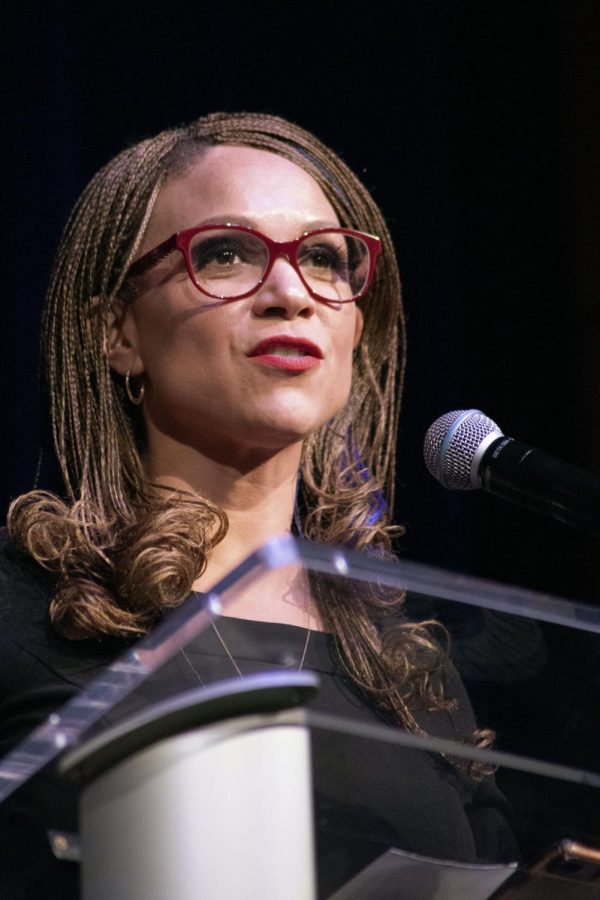 Keynote speaker Melissa Harris-Perry speaks during the annual Martin Luther King Jr. celebration at Kent State on Jan. 24, 2020. Harris-Perry talked about the need for change in the world.

Double dutching the way to a beloved community and future Martin Luther King Jr. would dream through the eyes of Melissa Harris Perry.

In her keynote speech at the Martin Luther King Jr. celebration Friday, Harris-Perry related the activity of double dutch, a children’s game involving a jump rope, to Martin Luther King’s movement for equality and peace.

In the game, three must work together, and Harris-Perry states, “one may not double dutch alone.”

Annually, the event celebrates the legacy of Martin Luther King Jr. bringing together students, faculty and community members to inspire, educate and unite.

Harris-Perry’s successful background as an author, television host, political scientist and professor created her desire to share the legacy of Martin Luther King.

Event attendee Anna Gregory said that she was drawn to the event in an attempt “to hear modern day individuals that are living out Martin Luther King Jr.’s dream, to hear what their mission is and how it can impact and inspire me.”

Harris-Perry encouraged the audience to ask the question, “Can we build a beloved community in a divided nation?”

Throughout her speech, she reminded the audience of the values of Martin Luther King, and those before us, that paved the way for equality, justice and freedom for all. Students, faculty and community members were asked to question the ways in which they think about society and injustice.

Focusing on the historic events in politics, race, education and war, Harris-Perry reminded the audience of the importance of respecting the opposing side’s thoughts in a nation divided, but the need for understanding, acceptance and communication.

“It didn’t work without violence,” she said. “The movement was bloody, brutal and violent and it revealed who we were so that we could potentially, maybe, in some way, find a way to double dutch together.”

To further the conversation in a forum following the speech, attendees were encouraged to present their questions to Harris-Perry.

One audience member asked “What is the importance of student political activity and activism?”

“I think young people are widely engaged,” Harris-Perry said, “I just don’t think we always notice that things like Black Lives Matter and DACA were created by millennials and Generation Z’s. They are continuing to pave the way.”

“Dr. Harris-Perry’s words exceeded all expectations,” audience member and Kent State student Brian Feitl said. “She was modern, engaging and inspiring, but overall, she got the audience to question the ways we think, which I believe was the most important aspect of the event.”