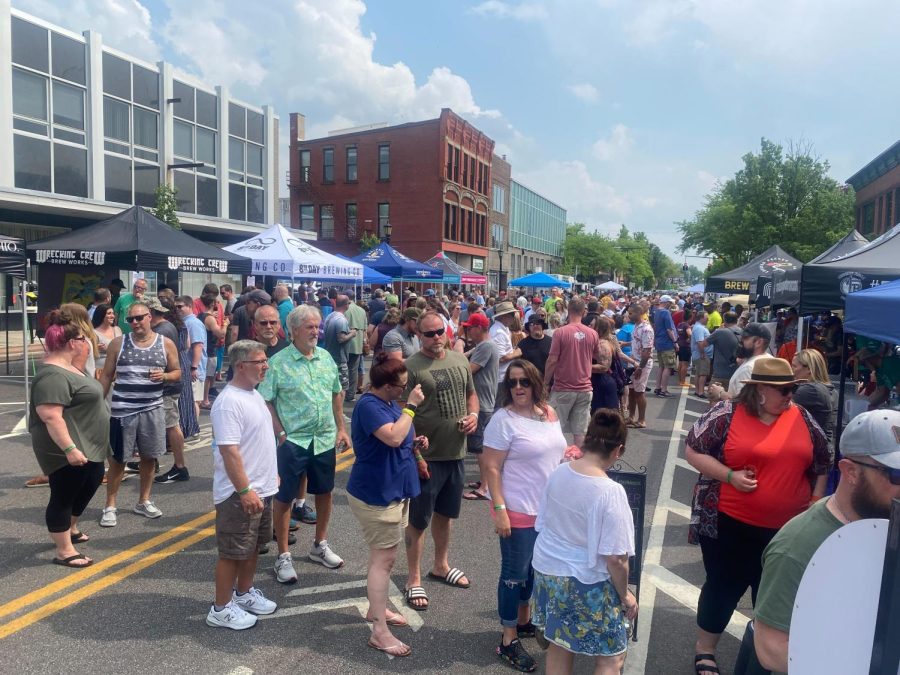 As the day began to warm up, Kent Craft Beer Fest attendees lined up along East Main Street to get a taste of local Ohio breweries.

The fourth annual festival, which ran from 3 to 8 p.m. Saturday, was organized by the Kent Jaycees, “a group of young professionals, ages 18-40, who work together to strengthen our community in many ways,” according to the Kent Jaycees website.

“We are a young professionals organization,” said Andrew Madonio, a Jaycees volunteer. “We provide leadership training for our members. We have events like the Craft Beer Fest to raise funds to donate back to the community and also to put on leadership training.”

Attendees were required to purchase either a general admission or VIP ticket to enter. General admission attendees received 10 four-ounce samples and a souvenir glass. Those who purchased VIP tickets received 20 four-ounce samples, a souvenir glass, a T-shirt, VIP-only check-in, a voucher for $10 at a food vendor of their choice, access to a specialty VIP area and early entry at 2 p.m.

“It’s been wonderful,” said Steve Prough, owner of Two Monks Brewing Company in Akron. He has been coming to the Beer Fest since it first started in 2018. “They [Kent Jaycees] bend over backward to help us.”

“I didn’t have anything to do,” Hermann said. “I made my beer recommendations, what we would bring, and I came and set up. Zero [work]. It’s great.”

Although they hadn’t opened their storefront yet, Bell Tower Brewing Co. also came to the Craft Beer Festival last year to showcase some of the beers they had to offer.

Mike Piazza, owner of Blue Heron Brewery and Event Center, described the event as “awesome — nothing but the best.”

He brings his beer all the way from Medina to Kent to “gain exposure [and] bring our beers to markets we don’t typically represent or people that don’t know about us.”

Kent Waldeck is the owner of Crafted Artisan Meadery, which offers a different kind of alcoholic beverage, mead — derived from fermented honey.

“We are all about trying to educate and bring mead back into the 21st century,” Waldeck said. “The Jaycees have been great. This is a really well-organized festival.”

Throughout the evening, attendees were able to get a taste of many local breweries, sample new types of beer and catch up with old friends.

“I’m excited,” said first-time attendee Laura Rodgers. Rodgers, along with her friends and family, visits different breweries throughout Ohio every weekend. “Having a bunch [of breweries] in one area is exciting.”

“I’m guessing it’s the most breweries they’ve ever had,” said attendee Pete Kenworthy. “Great turn out, great day.” Steve Fortlage, a former Jaycee, said. “I love that it supports charity. It makes me very happy, plus I know everybody here. Everyone is very friendly and well-rounded. They do a great job every year … let’s just call it what it is: I love craft beer.”

Kennedy Gotham is a reporter. Contact her at [email protected]