Kent State University Division of Diversity, Equity and Inclusion will host its second annual Juneteenth Jubilee on Saturday, June 18 from 11 a.m. to 6 p.m. on Manchester Field.

Originating in Galveston, Texas, the holiday commemorates the anniversary date of June 19, 1865, when Union Army general Gordon Granger announced General Order No. 3, which proclaimed the end of the Civil War and the emancipation of enslaved people in Texas, the last state of the Confederacy with institutional slavery, according to NBC News. Juneteenth became federally recognized in 2021 as Juneteenth National Independence Day.

Kent’s commemoration will be a “community celebration that combines the rich history of Black Americans with an assortment of festivities,” according to a press release from the university. 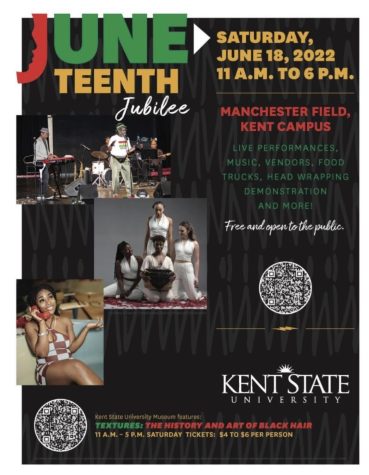 The celebration will include food trucks, craft vendors, musical performances and demonstrations, like head wrapping by the Ellipsis Institute for Womxn of Color in the Academy, which “engages participants through the sociopolitical analysis of what it means to wrap or cover one’s hair/head/ori and how our intersecting identities grant or deny access to institutional spaces as we work towards collective liberation,” according to the press release.

Archie Green of Peel Dem Layers Back, a rapper who aims to  “culturally educate, empower and equip Black men and boys with the essential tools necessary to live a mentally healthy life through a hip-hop lens,”
Chelsea Pastel, rapper and singer based out of Cleveland, Ohio
the Dayton Contemporary Dance Company
Ronel Regis, a recent graduate of Kent’s Jazz studies program
Kenge Kenge Orutu System, a traditional African music group from Kenya
Mwatabu Okantah and Friends, a poet and interim chair of the Department of Africana Studies
Nola Movement, a zumba and dance program

The event is free and open to the public.