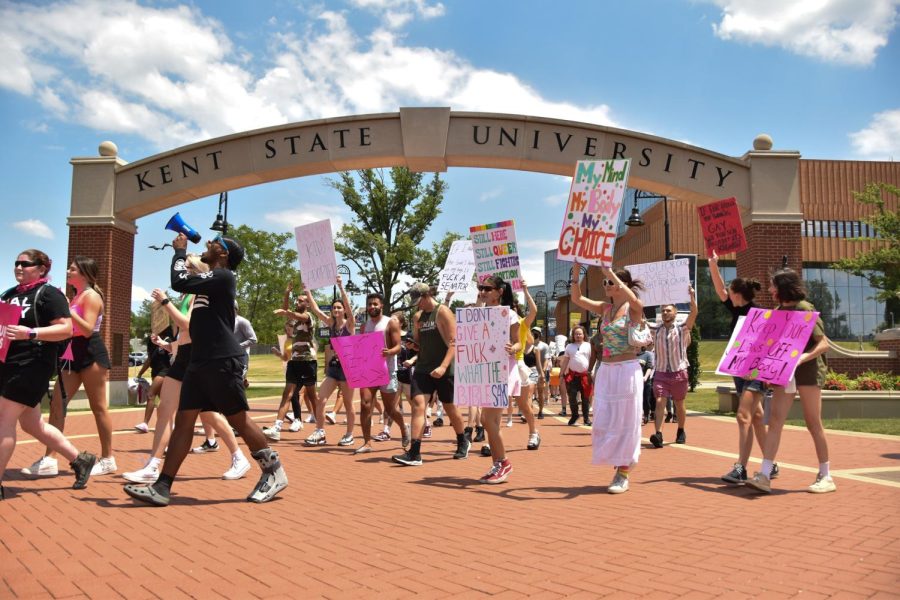 Several streets are blocked by law enforcement on campus due to the turnout of protesters at a pro-abortion rights march at Kent State June 29.

Editor’s Note: Some images contain language that may offend viewers.

A crowd of hundreds of students and community members made its way through campus Wednesday afternoon to protest the Supreme Court’s overturning of Roe v. Wade.

The protest, organized by Autumn Pritchard, a senior fashion design major, began at 1 p.m. on the Risman Plaza “K” outside the Student Center.

This was the second protest to take place on the university’s campus following the court’s decision, with the first organized by Students for a Democratic Society and taking place on June 24.

Pritchard began the protest with a speech where she raised her concerns about the effects of overturning Roe v. Wade.

“We will not, today or in the forthcoming future, forget,” Pritchard said. “We will continue to fight like our lives depend on it, because it most certainly does.”

Senior political science major and vice-president of the Spanish and Latino Student Association (SALSA), Erik Gomez, also spoke at the beginning of the rally, urging other cisgender men to use their privilege to speak out.

“Let me be clear: this is not some political issue. It’s not some uncomfortable topic,” Gomez said. “This is a human rights issue, and it needs to be called out for what it is.”

One attendee, Bryce Papp, said he came to the march in support of relatives who couldn’t.

“I came because my sister just had a baby, so she couldn’t come,” Papp said. “My mom works, and my nieces are obviously too young.”

The speakers at Risman Plaza also featured Gabrielle Blake, a senior paralegal studies major and a representative from Rise Up 4 Abortion Rights.

Blake spoke about the effects she said the overturning would have on marginalized communities, especially the LGBTQ+ community and women of color.

“If you have privilege in this space, you need to use that privilege for the right reasons,” Blake said. “We’re counting on you to use your privilege because us as Black, indigenous and queer folks, we are tired. We’ve been screaming for years, telling you that Roe v. Wade is going to get overturned and you did not believe us.”

The group then marched to the Portage County Municipal Court building on East Main Street while repeating chants of “My body, my choice” and “This is what democracy looks like.” Protesters were met with outside support through the sounds of car horns and bystanders shouting along with the protesters.

Recruitment for the protest was spread through social media, mainly through Pritchard’s Instagram account, along with a program that features upcoming local protests in the U.S., called We Won’t Go Back.

Bruce Kachenko, another attendee of the protest, said he found out about the event through We Won’t Go Back.

“I try to go to as many of these as I can, when I don’t have work, to show my support,” Kachenko said.

Pritchard said her reasoning for creating another protest is that she wanted to use her voice when she can for her own rights as well as those who have been historically excluded.

“I am tired of being silent and watching my rights and other people with uteruses’ rights be taken away from us,” she said. “What pushed me, as well, was knowing that so many people were going to be losing fundamental rights in health care, in many aspects other than abortion—the right to safe and chosen pregnancy, contraceptives, hormonal treatments for people with (polycystic ovary syndrome), endometriosis and those who are nonbinary or transgender.”

Colleen Burns is a reporter. Contact her at [email protected]

Sophia Lucente is a photographer. Contact her at [email protected]