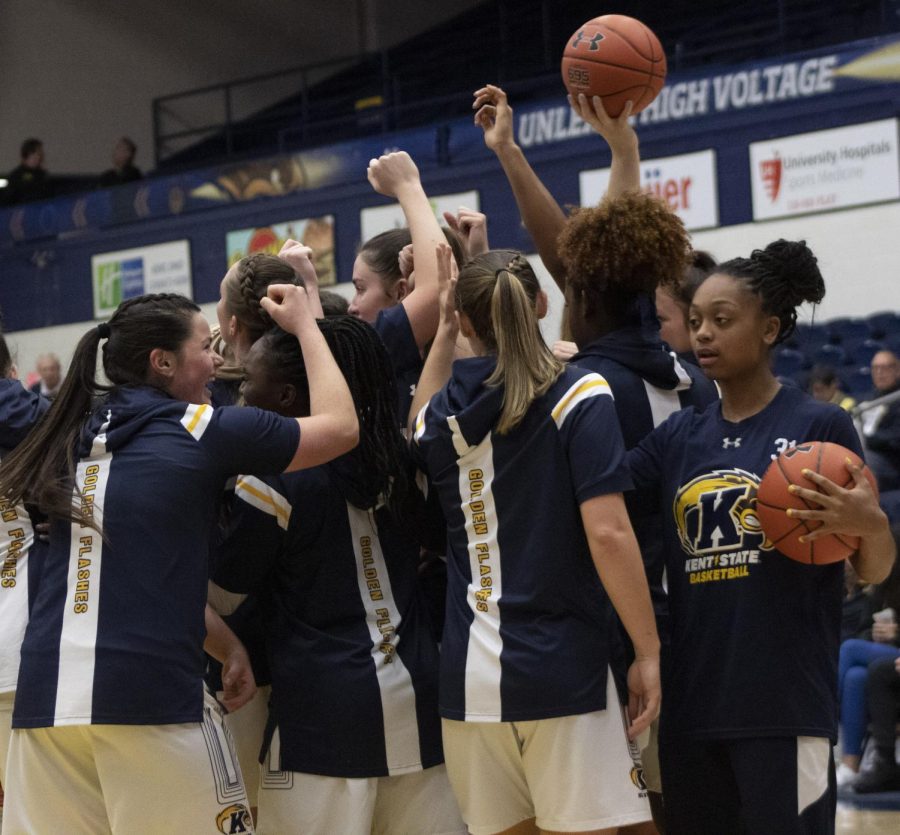 Kent State's womens' basketball team goes in for a huddle before the game against Western Michigan University on Jan. 11, 2020. The Flashes won the game 75-63.

Before Saturday’s game, freshman guard Katie Shumate’s season high in total points was 18. She surpassed that total at 3:44 in the third quarter setting her new career and season high with 20 points.

“I’ve been going through a little bit of like funk or whatever, but just playing with my teammates and playing off of them, with them to both our benefits. So I just think just staying out of our head and like if we make a mistake, you know, do the next right thing,” Shumate said.

“I was really pleased with the way the team responded and the fact that we started out with pace and tempo, even though we didn’t make some shots early, we played through that,” coach Todd Starkey said. “The other day we let our misses affect our energy early on and today when we missed baskets, we still came down and did a really good job of defending.”

Kent State’s defense limited Western Michigan to just one player scoring double digits in the first half as only Breanna Mobley scored 10 points with seven rebounds. Mobley would finish the day with 16 points and 13 rebounds.

“Today we were just wanting to do everything crisp, like urgent. Even if it wasn’t correct, we were trying and we were trying to have energy. I think that everybody just used their voice today and it was just if everybody, if it was Katie’s night, it was Katie’s night, we were just playing together. It was fun tonight,” sophomore guard Mariah Modkins said.

The Flashes also improved on their foul game. During Kent State’s game against Eastern Michigan the team had a total of 25 fouls. The Flashes only had seven fouls in the first half and finished the game with 16.

Dingle had the second highest scoring of the day with 17 points, four assists and three rebounds. Freshman forward Nila Blackford had nine points with three rebounds and one assist. Freshman Clare Kelly and sophomore Lindsey Thall combined for 14 points.

“I thought Mariah did a great job of controlling tempo when we needed to, really distributing the ball, helping us execute and stay in our stuff and being a good communicator,” Starkey said.

Kent State will travel to Dekalb, Illinois for their next game against Northern Illinois on Wednesday Jan.15 at 7 p.m.